The (Really) Old and New Meet in Naples 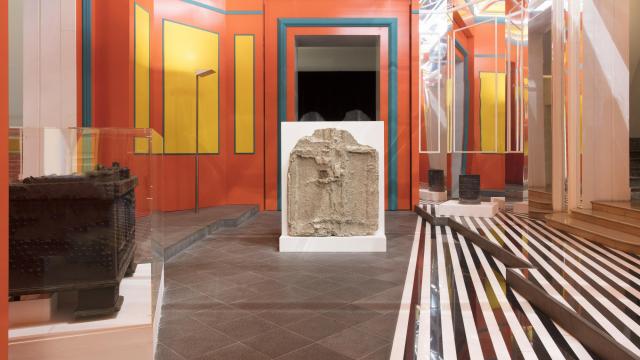 NAPLES, Italy — Pompeii’s interior designers made the most of the earthquake.

After it hit in A.D. 62, they renovated wrecked villas with vibrantly colored narrative frescoes that were, it turns out, incredibly long-lived. The eruption of Vesuvius, the volcano many of them thought was a mountain, only 17 years later in A.D. 79, both sealed the city’s choked inhabitants in a pumice-and-ash time capsule and preserved the wall paintings that scholars have come to identify as examples of the fourth Pompeian style.

Now, nearly 2,000 years later, some of that art is prominently displayed for the first time at “Pompeii at Madre: Archaeological Material,” a compelling new exhibition at the Madre contemporary art museum in Naples, just 15 miles north of the site.

The show, which runs through April, puts rarely seen ruins in contemporary confines, including site-specific galleries designed by Sol LeWitt, Mimmo Paladino, Jeff Koons and others, to create a mutual resuscitation. The contemporary sensibilities breathe new meaning into the ancient daybeds, carbonized bread loaves and reassembled terrazzo floors, but the antiquities — perpetually pregnant with the weight of Pompeian life and destruction — give resonance and depth to contemporary works that can veer toward the esoteric. On this two-way street, artifacts that could seem like mere archaeological detritus are revived by their contemporary context, but they also lose their more familiar antique qualities and are forced to fend for themselves.

“It’s the first time that Pompeii risks a real confrontation with contemporary art,” said Andrea Viliani, one of the curators of the exhibition.

Both may come out the better for it.

On a recent afternoon, Viliani began a packed tour by ruminating, fittingly, on a Pompeian door. He explained that like the Pompeian figures immortalized in their death throes, museumgoers were really looking at the empty, or “negative” space — voids once filled by bodies, dogs, portals — around which the volcanic materials hardened, and into which plaster was poured to make casts.

That process echoed, he said, how successive generations of writers, filmmakers and contemporary artists had poured their own imaginations into the story of Pompeii, keeping it alive and relevant to the present day.

His point was emphasized by his surroundings. The entrance-floor atrium, designed by French artist Daniel Buren, evoked the blockier shapes of early Pompeian wall paintings but its mirrors added a fun-house dimension announcing that here the ancient and the contemporary would be bouncing back and forth, the old would seem new and the new old.

Buren’s atrium, commissioned by the museum in 2015 for its 10th anniversary, is a site-specific piece that has become part of the museum’s permanent collection. Those rooms, mostly on the elegant museum’s first floor, are now repurposed as a modern reimagining of a Pompeian domus, or home. The galleries are furnished with first-century artifacts on loan from the archaeological park’s storehouses.

In an airy room painted with Neapolitan and Pompeian themes by Italian artist Francesco Clemente, an ancient phallus sculpture hangs from the ceiling, and tables and reclining chairs create an updated triclinium, or dining room. In another room streaked with paint by Richard Long, the excavated pots and pans seem to be sitting amid the kitchen’s splattered backsplash.

The then and the now conversed fluently where British sculptor Anish Kapoor’s meters-deep black rectangular hole in the ground yawned underneath busts of Pompeian divinities that connected the underworld and the heavens. They practically chattered in a white room featuring “10,000 Lines,” red and blue wall drawings by LeWitt, set against an intricate, ancient mosaic that curators placed on the floor between them.

In Paladino’s white cubiculum, or bedroom, a figure stares at the wall, seemingly looking away from the plaster casts of Vesuvius’ victims. It’s hard to blame him. The man, doubled in agony, can do nothing as the child on his belly reaches for a final gulp of air. The question of context and of a museum’s role as a time machine is the theme of the second part of the show, which runs through November and is what organizers call an “intellectual excavation” of Pompeii’s history. In the first archaeological mission in 1748, the area’s Bourbon rulers had all the treasures sent to Naples, a plunder that damaged the integrity of the site but produced the wonderful collection in the city’s grand National Archaeological Museum.

On Madre’s top floor, the process of uncovering Pompeii is examined. Handwritten notes, detailing the treasures shipped to Naples, sit under vitrines with shovels and picks used in the digs. They surround a work, “Rebirth,” by Argentine sculptor Adrián Villar Rojas, in which nests and briaded wool rise from felled tree trunks. The idea that antiquity arrives to us in fragments is hammered home by Maria Loboda’s “Interrupted Pillar,” a column hanging from the ceiling and sprouting from the floor but empty in between.

The past and present will be further fused next summer, when Viliani and Massimo Osanna, the director of the Archaeological Park of Pompeii, will help choose artists to sculpt new works from stone and ceramic archaeological fragments that were irreparably damaged when Allied forces bombed Pompeii in 1943. For the moment, these shards and fragments sit in two crates in an exhibition room under Andy Warhol’s vivid, bursting pop canvas of Vesuvius, on loan from the Museo di Capodimonte in Naples.

Naples and Pompeii are themselves experiencing rebirths, adding an extra dimension to a show about the irrepressibility of Pompeian life. After decades of crime, Naples is moving forward as a home to film shoots, celebrity chefs and contemporary art. The city’s streets brim with life and its metro system is a contemporary art museum, with top-notch works strewn under the city.

And Pompeii, where discoveries continue and contemporary instillations arrive, is experiencing a renaissance after structural collapses in 2010 raised alarms and prompted the Italian government and the European Union to invest more than 100 million euros, or around $120 million today, into a restoration campaign. A short distance outside Naples, Mattia Buondonno, Pompeii’s celebrated guide, stopped in front of a storefront facade and pointed out the faded etchings of letters from the Roman alphabet. As two young visitors inspected the walls where their ancient predecessors practiced their ancient ABCs, Buondonno said, “The walls talk. The walls whisper.”