The QAnon conspiracy is fake. The harm it's doing to child welfare groups is real 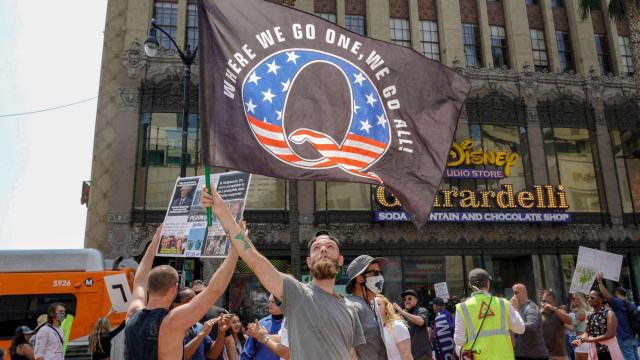 CNN — Child welfare organizations for months have felt the full weight of the coronavirus pandemic, navigating concerns about unreported abuse and ensuring their resources are available to at-risk children.

But now, deeper into the outbreak, a new challenge is emerging that's complicating their critical outreach efforts: the QAnon conspiracy theory.

The most basic QAnon belief -- entirely divorced from reality -- casts President Donald Trump as the hero in a fight against the "deep state" and a sinister cabal of Democratic politicians and celebrities who abuse children. It features an anonymous government insider called "Q" who purportedly shares secret information about that fight via cryptic online posts.

And it's the behavior of those who follow the conspiracy theory -- their supposed efforts to help abused children -- that's putting an increasing strain on the resources of actual child welfare groups.

The problem has become so severe that one such organization, Childhelp, says it had to set up an auto-response message on its crisis hotline to filter out QAnon callers after their name appeared in a QAnon meme.

"If you have a hotline counselor who is taking time to speak to someone discussing a debunked conspiracy theory, there may be a child holding on the next line," Daphne Young, chief communications officer for Childhelp, told CNN.

The rise of QAnon -- and its movement off the internet and onto the hotlines of child welfare organizations -- marks just the latest wrinkle in the effort to protect at-risk children during the pandemic.

Figures provided to CNN from states across the country in the early months of the outbreak showed considerable drops in child abuse reports as social distancing measures kept kids out of school. While that would usually be welcome news, experts say the decline might really mean more cases are going unnoticed.

As a result, welfare groups like Childhelp have shouldered the burden of making themselves increasingly available for assistance, especially given the muted response from the US Department of Education.

But now the QAnon conspiracy theory is further straining their efforts, and Young says the damage is far more corrosive than people realize.

Beyond the calls to their hotline, Young explains that QAnon does "psychic damage to our work, which is the crying wolf phenomenon."

"If you get people constantly crying about abuse day in and day out on social media that is not real -- that is, everybody in Hollywood is part of a mass cabal drinking the blood of children, which is literally one of the conspiracy theories, drinking from their adrenal glands to stay young -- this madness drowns out a child asking for help, a parent that needs resources," she said.

"It drowns out anyone that's a survivor who is trying to get in touch with us, and it's not only 'cries wolf,' but I think that it also gives -- in a strange way -- it gives predators a little protection, because if everybody's crying abuse, then maybe the guy down the street didn't do it either."

That message has been echoed by other child welfare groups, which have become increasingly vocal with concerns that QAnon supporters are blurring the difference between their conspiracy theories and the work of real welfare and advocacy organizations.

The KidSafe Foundation, which aims to protect children from sexual abuse and trauma, now boasts a forceful statement on its website deriding QAnon promoters as "parasites" trying to "hijack the good names of organizations leading the fight" against real abuse.

"To grow their footprint, gain credibility, and spread misinformation, they associate their message of hate and bigotry with well-known, well-regarded organizations -- specifically those working to end child sexual abuse and sex trafficking. That strategy threatens to diminish our identities, tarnish our reputations and harm our good works," the statement says.

Cherie Benjoseph, the chief program officer and co-founder of the foundation, separately told CNN that the rise of QAnon has become especially problematic because people are already "reluctant enough to accept the reality of child sexual abuse without being driven away by QAnon's despicable presence."

In one particularly notable show of force, more than 100 anti-trafficking and child welfare organizations published an open letter warning of the dangers that QAnon posed to their work.

"On behalf of an underfunded and nonpartisan field dedicated to ending this horrific form of exploitation and abuse and helping those who have survived it, we urge you to engage real needs rather than politically motivated and profoundly dangerous narratives that harm the very people who they claim to be speaking for -- victims, survivors, children, families and vulnerable communities," the October letter said.

But even with considerable pushback from reputable groups, the conspiracy theory has proved to have a unique staying power -- in part because of buy-in from some parts of the GOP.

Nearly two dozen Republicans across the country who have engaged with the conspiracy theory appeared on the ballot this month, and some even prevailed.

Greene called "Q," the anonymous central figure in the conspiracy theory, a "patriot" in a 2017 Facebook video that has since been deleted, and Boebert said on a YouTube show in May that she hopes QAnon is real, "because it only means that America is getting stronger and better, and people are returning to conservative values."

A spokesperson for Greene declined to comment on her support for the conspiracy theory, and Boebert's campaign did not return CNN's request for comment. Boebert has previously said she was not a follower of the movement and her campaign has worked to distance her from the conspiracy theorists. After her primary win, Greene walked back her support and said the QAnon candidate label "doesn't represent me."

The President has similarly refused to disavow the conspiracy theory. During an NBC News town hall last month, Trump said he only knows that QAnon is "very much against pedophilia" and he agrees with that sentiment.

That kind of national exposure complicates nearly every aspect of real child welfare outreach, including organizations that focus on the crucial education and training components.

Some have already been afflicted.

Katelyn Brewer, the president and CEO of Darkness to Light -- a child sexual abuse prevention group with a slate of training courses -- told CNN that she had a board member resign after their name became attached to a QAnon conspiracy theory and they became concerned about the organization being dragged into it as well.

"Part of the impetus of that resignation was that things were threatening. My name and Darkness to Light's name was starting to be brought into the sort of conspiracy conversations," Brewer said.

"And so that board member said, 'You know, it's hard enough dealing with this for myself. I don't want to bring in an organization I love and that's been doing good work for 20 years into this.'"

"And it was devastating," Brewer continued. "That board member was -- quite frankly, still remains -- an incredibly dedicated lifelong commitment to child protection."

Darkness to Light hasn't incorporated QAnon education into its training because, as Brewer explains, it doesn't want to "give credit to this conspiracy."

"We've had a couple of conversations about it internally and when it first sort of all came to a head, what, five months ago, we definitely talked about whether or not to say something and we did see other organizations release statements," she said.

The concern now centers on how long QAnon will be around for, and what it will take to recover from the damage it's already done.

Victor Vieth, the director of research and education at the Zero Abuse Project, told CNN that it had taken decades for the field to recuperate from a set of conspiracy theories about satanic cults and child abuse that had gained traction in the 1980s.

"For 20-some years we have been fighting back against that myth and we have made great, great progress. We've got over 900 accredited children's advocacy centers. We have lifted the bar responding to all forms of trauma treatment. We know what is an evidence-based approach to preventing it," he said.

For Young, it's clear that reprieve from the conspiracy theory will start only when people realize the correlation between spreading it online and the harm it brings to at-risk children.

"If there was any message I could give to somebody who's sort of wrapped up on these online forums, it's that your fight against disinformation would be a fight against child sexual abuse," she said.

"You fighting this stuff and not sharing it and not sending it around -- if that's the least you could do is simply not participate in it -- you would be helping the actual folks that are fighting child sexual abuse rather than sharing this or helping to pour gas on the fire."

Anyone worried about the possibility of abuse or neglect can contact the national child abuse hotline: 1-800-422-4453 or childhelphotline.org. Crisis counselors answer calls 24/7 and confidentially provide crisis intervention, information and referrals.