The Postal Service may need a bailout. But it's actually making tons of cash 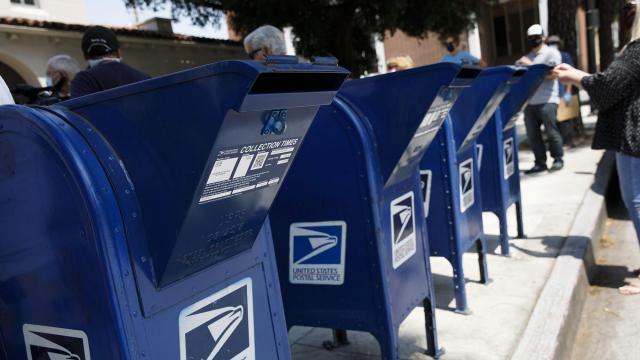 CNN — The House of Representatives on Saturday approved legislation for a bailout for the US Postal Service, which, on paper, has been posting huge losses for years. But in reality, the agency is generating billions in cash.

Virtually all of the agency's financial problems stem from a unique, arcane accounting system that no other business or government body follows and that doesn't accurately reflect real costs. ("Utterly absurd," as one lawmaker calls it.)

The financial problems have nothing to do with the expected surge in mail-in ballots for the election in November. And they are certainly not because of its contracts to handle delivery of Amazon packages, no matter what President Donald Trump claims about losses on those deliveries. Postal law, and investigations of those contracts, have confirmed that the USPS makes money on the contracts it has with Amazon and other major shippers.

That positive cash flow came despite a large reported net losses — $7.5 billion the most recent nine months, up from a net loss of $5.9 billion in the year earlier period.

It is true that there has been a continual decline in traditional first class letters over recent years, as bills and payments shift from traditional mail to online. But even with the drop in revenue and volumes from traditional letters, the USPS makes money on that business.

The decline in letter volume has been more than made up by increased package shipments, as consumers make more purchases online.

Cash flow and profits are not the same thing. Profitability factors in the costs of doing business, and in the case of the Postal Service, those costs are significant.

The biggest drag on its finances is a unique rule that requires the USPS to prepay for workers' retirement benefits for decades into the future. In 2006, Congress passed a law to require the the agency to pre-fund 75 years worth of retiree health care benefits in the span of about 10 years.

"There's no other entity on Earth that does anything like that. When I talk about it, people say it's utterly absurd," said Rep. Peter DeFazio, the author of legislation that would remove that requirement. The legislation, which the USPS supports, has passed the House with bipartisan support, and a Senate version also has bipartisan sponsors, but no vote has been scheduled yet.

The rule took effect in 2007, just before the start of the Great Recession, when the Postal Service was still reporting profits. But the economic downturn hit hard and made the payments unaffordable.

It's true that no other unit of government or private company that provides retiree health care coverage has to make such pre-funding payments. And in recent years, the USPS has not made the required payment, citing a lack of available cash.

Here's where it gets really absurd.

Even though the USPS hasn't been making those payments, it continues to book the theoretical cost as an expense — $16.8 billion since the start of the 2017 fiscal year. That accounts for most of the agency's reported losses.

Retirees are still covered because the USPS made payments in the past. As of September 30, 2019, the balance of the retiree health benefits fund was $92.2 billion, with interest on the holdings covering most of the actual premium costs it made.

The cost of retiree health care coverage is further inflated by the fact that only 74% of the nearly 500,000 retirees and their family members covered by those policies are fully enrolled in Medicare. Instead they use the USPS health care policies as their primary insurance, rather an as supplemental insurance.

If the USPS would require full Medicare participation, it would eliminate about 90% of the USPS unfunded retiree health care costs — about $33.5 billion — over 10 years, she told lawmakers.

In addition to retiree health care costs, workers' compensation is another hypothetical cost weighing on USPS finances. Since October 2018, it has booked about $4 billion in costs above what it is actually having to pay to cover the cost of on-the-job injuries or deaths suffered by postal workers.

Should USPS be trying to make a profit?

Most people don't realize that the service typically runs without any taxpayer subsidies, despite being a part of the government that goes back to before the revolutionary war.

"This is the Postal Service. It's not the postal business," said DeFazio. "It doesn't need to make money." He said if it wants to maximize profits it would hurt many Americans, particularly in rural areas that are expensive to serve.

"UPS and FedEx depend on Postal Service to go where they don't want to go," he said. "If you wanted to run it as a business, you'd eliminate the least profitable routes, you'd cut out all of rural routes. There's no substitute for the Postal Service for much of the country."