The Pianist of the Resistance Captures a Surprise Award 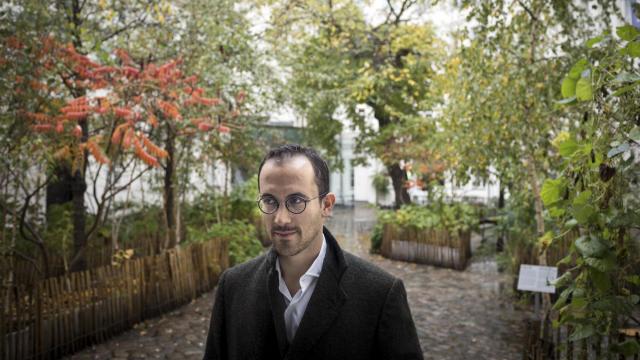 BRUSSELS — It was Nov. 9, 2016, the day after Donald Trump was elected president of the United States. The pianist Igor Levit strode onto the stage at the Palais des Beaux-Arts, an art deco gem here known as Bozar, to play Beethoven. But first, he had something to say.

Declaring that “the time of staying in my comfort zone is over,” Levit, 30, did something that would not be in the least unusual at many kinds of concerts, but is still quite rare in classical music: He spoke directly to his audience, brought up the world outside the concert hall, and unhesitatingly took sides in a political controversy.

“Yesterday, the greatest economic power in the world has freely elected a bigot, an opportunist, an angry and dangerous man as their new president, as their commander in chief,” Levit said, going on to denounce Brexit and the rise of the far right in France and Germany.

His speech caused a commotion, as audience members called out, both attacking and defending him. “I don’t think one should use the concert stage all the time for political statements,” he said recently. “But this day was a very traumatic day for me, and I think for all of us: The night before, Donald Trump was elected president. I’d had a concert in London, I took a train to Brussels, I couldn’t sleep all night. And I just wrote down this speech. I felt a certain urgency.”

On Wednesday, Jan. 3, his potent mixture of powerful art and political candor was given a major boost: the $300,000 Gilmore Artist Award, one of the most prestigious, and unusual, prizes in classical music. Granted to a pianist every four years, it is not a competition, so contestants do not even know they are in the running. Instead, a small, anonymous jury travels incognito to concerts around the world, searching for an artist with the potential to make a mark on music.

Levit has certainly, and swiftly, made a mark. It is not easy to achieve stardom as a concert pianist these days, with competitions and the recording industry fading as launchpads. Some conservatories, including the Juilliard School, have cut back on piano students, fearing that the market is saturated. Against those odds Levit has managed to break through, thanks to a combination of his playing and his daring — as in a 2015 collaboration with the artist Marina Abramovic on a stark staging of Bach’s “Goldberg” Variations in New York.

And he has stood out by emerging as the de facto pianist of the resistance, with politics that do not merely flavor his outspoken Twitter feed but inform his musical identity.

On a recent Sony Classical recording, he boldly brought together three sets of variations: Bach’s “Goldbergs,” Beethoven’s “Diabellis” and Frederic Rzewski’s on a song beloved of the Chilean left, “The People United Will Never Be Defeated!” At a BBC Proms concert last summer, in a London consumed by Brexit, he played an encore of Liszt’s transcription of Beethoven’s “Ode to Joy” — the official anthem of the European Union — and wore a small EU pin to drive the point home. (Breitbart took notice, in an article that described the Beethoven as a “protest song.”)

Levit and one of his closest friends, Georg Diez, who writes about politics and culture for Der Spiegel, traveled together to the Idomeni refugee camp along the Greece-Macedonia border a couple of years ago to better understand the refugee crisis.

“What fascinates me about Igor is that art, life and politics are all one,” Diez said. “You have to understand suffering, the state of the world, in order to understand music.”

Levit was born in 1987 in Nizhny Novgorod, Russia (the same city, he noted, as another, slightly younger piano star, Daniil Trifonov), where his mother was a serious pianist and his father an engineer. His family moved to Germany when he was 8 — in search, he said, of better opportunities — and settled in Hanover, where his mother still teaches at the conservatory. He wasn’t shy, even as a teenage student. It was in the conservatory library that he first discovered the music of Rzewski, now 79, a passionately political American pianist and composer who is eminent in new-music circles. Levit Googled him and found his email address.

“Would you write something for me?” Levit recalled asking.

He got a response a few days later. “So I said, ‘Well, if you can find somebody to pay for it, sure, why not?'” Rzewski recalled. “And he did.”

In 2005, Levit won the silver prize at the Arthur Rubinstein Competition in Tel Aviv, but more important, he caught the attention of the pianist Matti Raekallio, who served on the jury. Soon Levit, who had been having difficulty with one of his teachers in Hanover, was studying with him.

“I thought it a scandal that he didn’t win the first prize,” Raekallio said. “It was so obvious that this guy could do anything.”

He graduated with top marks from the conservatory in 2009, and by 2012 had signed with Sony; his first recording, of late Beethoven sonatas, won wide acclaim. The Guardian praised his poise, maturity and purity of tone in its review, proclaiming him “the real deal, and definitely a pianist to watch.” Noting the audacity of starting a recording career with late Beethoven, usually the province of masters, Gramophone declared it “neither reckless nor arrogant, but a debut of true significance.”

Along the way he was aided by moments of serendipity: In 2014 he served as a concert stand-in for two more established pianists, Hélène Grimaud and Maurizio Pollini. Levit said that while he has always been serious about his playing, it was only in the last few years that he had found “a certain kind of inner freedom” as a musician.

At the same time, his politics — shaped in part by the experience of being a Jewish immigrant in a Germany with a newly ascendant right flank — were beginning to evolve. The euro crisis, Occupy Wall Street and the international conflict over migration all played a role.

“The refugee crisis,” he said, “was a point of no return for me.” When Levit gave his North American debut recital at the Park Avenue Armory in 2014, Alex Poots, who was then its artistic director, was taken by his musicianship and thoughtfulness. He came up with the idea of pairing him with Abramovic — but first he had to get them together to see if they had chemistry.

They all went out to the Chiltern Firehouse, a chic London hotel, where the deal was sealed at a noisy, crowded bar after midnight, when Abramovic turned to Levit and asked him to play something on the piano.

“I said, ‘Marina, I can’t play the piano here, everyone’s dancing,'” Levit recalled. But the owner silenced the DJ, and Levit played the final movement of Beethoven’s “Hammerklavier” Sonata.

Poots said that the room fell silent: “From a noisy bar, full of party and life, you could not hear a pin drop.”

The staging of the “Goldberg” Variations that followed involved the audience wearing noise-blocking headphones while sitting in silence for half an hour while Levit, at a grand piano, slowly moved down a long runway. When he reached the stage, the headphones came off, and Levit played.

“To focus backstage? Whatever,” he recalled recently. “To focus together with the audience, in the space the concert will take place? To get into the mood together? Unforgettable.”

Earlier this fall Levit returned to Bozar, for more Beethoven. There were no speeches this time. But Rzewski came to hear him play, and joined him and some friends for dinner afterward, where they got into a heated discussion about why the far right was making gains in Germany.

Then the lovably crusty Rzewski had a musical complaint. At a recent concert of one of his works, he said, Levit had faked a tricky passage.

The fakery itself did not bother Rzewski. “I’m the master faker,” he said with a mischievous grin. The problem, he explained, was that Levit’s solution made a hard section sound easy. “If a composer writes a difficult piece,” he said, “everybody should understand it is difficult.”

Levit said later that this was something he often thought about while playing, and that it had informed his take on “The People United,” especially on the recording. “The only advice he gave me is that a crucial part of any piece is to hear the pianist’s physical endurance,” he said.

Now, with the Gilmore Award, Levit will be given a chance to explore new horizons. The award — named for a businessman from Kalamazoo, Michigan, who was devoted to the piano — is sometimes likened to the MacArthur “genius” grant, which also comes as a surprise to its awardees, nominated in secret. Piano competitions have of late largely failed to mint intriguing winners, but the Gilmore has favored complete artists — young but mature — like Rafal Blechacz, Kirill Gerstein, Ingrid Fliter, Piotr Anderszewski and Leif Ove Andsnes, more than flashy virtuosos.

It is obvious just from looking around Levit’s sparsely furnished apartment in Berlin that he is no airhead prodigy. Scores and boxed sets share space on the white shelves with books by Thomas Piketty, the economist known for his studies of income inequality; James Baldwin; and Amiri Baraka. Jascha Heifetz and David Oistrakh violin recordings are joined on his iPhone by Dr. Dre and Kendrick Lamar. A couple of months ago — before the Gilmore was announced, but after he learned it would be his — Levit paced nervously in the living room as his enormous Steinway grand piano went out the window.

“This is awful,” he said, looking at the empty space where the piano, which he had nicknamed Lulu after the willful heroine of Berg’s opera, had stood.

Workers wrapped it in plastic; eased it onto his terrace; hoisted it by crane over neighboring trees and past a home for refugees next door; lowered it gently to the street; and loaded it onto a truck bound for Bavaria, where Levit would play it at a recording session.

The piano was given to him a decade ago, at the outset of his career, by the trustees of Independent Opera at Sadler’s Wells, to help him start out. Now Levit wanted to pass it on to someone else, and choose a new instrument of his own. It was a bittersweet moment.

“I grew up with this instrument,” he said, as it disappeared from his apartment.

Last month he sent a text message from Berlin, where a new Steinway grand was making the reverse trip by crane. “My new roommate is arriving :-),” he wrote. (He named it Monk, after Thelonious.)

Now he has a new instrument to adjust to, new concerts to plan, a new recording coming. The 250th anniversary of Beethoven’s birth, in 2020, will bring plenty of work, too, for a Beethoven specialist. He said that he was still making plans for what to do with the Gilmore prize money.

But Levit also fantasizes about the kind of academic fellowship that would give him time to study, reflect — and interact. (He has little in common with the stereotypical nose-to-grindstone soloist, living alone in hotel and practice rooms.)

One thing that won’t change is his determination not to compartmentalize his political from his artistic self.

“The idea that art is an excuse for not engaging,” he said, “is utterly ridiculous.”