The Passion, and Sometimes Profit, of Vintage Racing 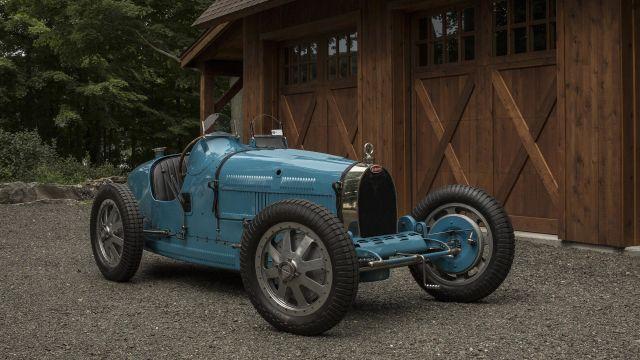 In the best sporting tradition, Douglas Cushnie doesn’t like to talk about how much his vintage Bugatti — a 1927 Type 35C Grand Prix — might be worth.

“If it had a racing history or distinguished provenance, it might command a million at auction,” Cushnie, 61, said. “But I wouldn’t sell it at any price. Nor would I consign it to a garage or a museum. It was built to race.”

That’s just what Cushnie will do next week. He’ll fire up his antiquated road rocket and go wheel to wheel with a gaggle of other prewar race cars along the track at Lime Rock Park in Lakeville, Connecticut.

“This is my first big race,” said Cushnie, of Sherman, Connecticut. “It would be nice to win, but most of all I hope I don’t break something. Parts are expensive and hard to find. And even if you finish first, there’s no prize money.”

Yet the paucity of purses doesn’t keep thousands of well-heeled Americans from participating in the numerous vintage auto events — not just cruise nights, parades and concours d’elegance, but races, rallies and hill climbs — that take place every weekend across this country.

This year, one of the biggest is the 10th U.S. Bugatti Grand Prix, expected to attract some 80 examples of the eponymous marque from all around the world to Lime Rock for three days of racing, rallies, a concours and all-around hobnobbing.

Though vintage racing is an amateur affair, it isn’t the kind of competition anyone pursues on a shoestring. Nowadays no such gathering of old-car buffs is complete without talk turning to $40 million Bugattis, $60 million Ferraris and the prospect of even higher-priced machinery’s going onto the block.

It wasn’t always this way, said Ford Heacock, founder of the Sportscar Vintage Racing Association. “In the 1950s, vintage racing was a ragtag, unsafe hobby,” he said. “The cars were relatively inexpensive.”

But the vintage car market took off in the 1980s, said Phil Tegtmeier, a Ferrari broker and concours judge from Bryn Mawr, Pennsylvania. “'Magnum P.I.’ and his 308 GTS Ferrari were on TV every week and everyone wanted a Ferrari” he said.

“By the late 1980s, Ferraris were appreciating so much it was possible to lease one, keep it three or four years, and then turn it in for a profit,” Tegtmeier said.

But performance models are meant to be driven, not merely observed. That goes for vintage examples, too, and a whole cottage industry has grown up around getting them — and their drivers — ready to race.

John Barber, who goes by Skip, began his racing career in the late 1950s while an undergraduate at Harvard.

“I didn’t have any money,” Barber said. “I was going to Harvard on a scholarship and driving a borrowed 20-year-old MG.”

Barber said couldn’t afford track time to practice, so he would tear around the roads surrounding Boston after 2 a.m., when nobody else was on the road. Those breakneck excursions through the moonlit countryside paid off. He won three Sports Car Club of America national championships in a row in the mid-1960s.

Along the way, he had an epiphany: If athletes in every other sport could benefit from coaching, why wouldn’t race car drivers? More to the point, why couldn’t their instructor profit from helping them hone their skills on the track?

In 1975, with two borrowed Formula Ford open-wheel racers and four students, he started what is now called the Skip Barber Racing School, whose alumni include Mario Andretti, Tom Cruise and Jerry Seinfeld. Today, there are dozens of high-performance racing schools around the country, certified by the Sports Car Club of America and offering courses that can cost up to $7,000 for five days of instruction. The Skip Barber Racing School — Barber sold his controlling interest years ago — charges just under $2,000 for a one-day program.

Then there’s the matter of the car.

A race-worthy model — an old Mustang or Corvair — can be had for as little as $15,000 to $20,000, said Terry McGean, editor-in-chief of Hemmings Motor News. But that’s just the beginning.

Safety equipment will add to the cost: a helmet and a fire suit for the driver, while a HANS device — to support the driver’s head and neck — and a fire-suppression system must be fitted to the car. One ready to race, a vehicle that’s not road legal must get to the track, requiring a trailer and something to tow it. Any vintage racing event will be generously dotted with expensive motor homes.

At Paul Russell & Co., a Massachusetts dealer and restorer that offers maintenance and even support at road rallies, Alex Finigan, the sales manager, looks askance at the idea of an owner’s ever parting with a car worthy of his dealership.

“People never buy our cars as investments,” he said. “Our clients are hard-core car guys. If you can afford it, then buy it. But we don’t sell our cars in hopes it will go up in value.”

Still, Finigan acknowledged that almost every car that his company had sold — a carefully curated selection of vehicles that includes vintage racers — had gone up in value.

“Nobody can see into the future,” he said, “but if you look five years ahead, you’ll see our cars will go up at least 15 percent.”