The Particular Horror of Long Commutes for Young Families 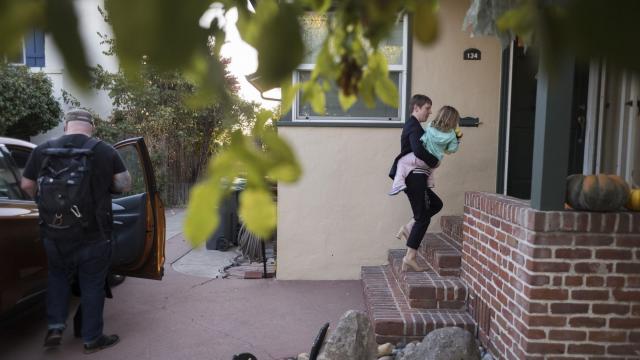 When Elizabeth Yura returned to the office after maternity leave, her work-life balance got more complicated. So did her commute. Before she had a baby, she was willing to put up with an hour and 45 minutes on an Amtrak commute from her home in Emeryville, California, to her office in Sacramento. But as a new mom, she started driving to work to save a little time: a one-way trip of an hour and 20 minutes, or longer in traffic.

“I was still nursing two to three times per night. Felt like a zombie all the time,” said Yura. She pumped breast milk at work, and in an effort to be efficient, she also pumped hands-free while driving back home.

“I’d wear one of those nursing covers, the kind that looks like an apron, over the pumping equipment, because I was totally paranoid that a passing car would be able to look in,” Yura said. Pumping on the go also made post-work errands and stopping for gas difficult.

Eventually, Yura found her current job, as director of community engagement and policy at the Bay Area Air Quality Management District, which offers a flexible schedule. She and her husband and daughter, who is now 2 1/2, moved so that she could be closer to work.

Commute times are creeping up across the nation. On average, Americans spent 2.5 hours more to get to work last year, compared to 2016, according to the Census Bureau’s newly released American Community Survey data for 2017. For many working parents, these statistics speak to an underlying anxiety, as longer commutes force them to choose between staying for a client meeting and making it back in time for a school game or family dinner. The average national commute is now 26.9 minutes each way, 18 seconds up from 26.6 minutes in 2016. Also, more people are making longer journeys. “In 2017, 9.3 percent of U.S. workers reported having a one-way commute of at least an hour, up from 9.1 percent in 2016,” said Brian McKenzie, chief of the journey to work and migration statistics branch of the Census Bureau.

“What may have once been a frustrating commute could now mean missing school drop-off or bath time. The stakes of losing those hours in the day may be higher,” Robinson explains.

The New York-Newark-Jersey City metro area, with one of the longest commutes nationwide, experienced an average work trip rise up to 37 minutes one way, from 36.7 minutes in 2016. For the San Francisco Bay Area, the time spent on congested freeways skyrocketed 89 percent between 2010 and 2017, from 1.9 minutes to 3.6 minutes daily, according to Vital Signs, a monitor of regional trends. The average Bay Area commuter sits in freeway traffic 24 hours annually, says David Vautin, principal planner with the Metropolitan Transportation Commission and Association of Bay Area Governments.

One explanation is that people flock to areas with economic opportunities. In the Bay Area, for instance, the tech boom has long been associated with income disparity, and with a housing shortage added to the mix, workers are getting pushed further from their workplaces. “The Bay Area’s economy has seen strong recovery since the Great Recession, and it’s likely that the increase in congestion is due in part to that,” says Vautin.

But long commutes correlate with weight gain, neck and back pain, anxiety and trouble concentrating.

For mothers returning to the workforce, the office journey is an additional hurdle, alongside the gender pay gap, the rising costs of child care and the fact that child rearing and domestic duties still fall primarily on women.

To beat traffic, some work from home when possible. Others, like Yura, look to change jobs or move.

Such was the case for Mona Rizzardi, a lawyer who worked for a national law firm in downtown San Francisco. After getting married, she and her husband wanted a home with a backyard and a garage, near parks and affordable child care options. With the median house price in San Francisco a record $1.62 million, double what it was five years ago, the couple bought a home in the suburbs instead.

What followed was a scramble familiar to many parents working outside the home: 7 a.m. day care drop offs, rushing to the train station before the parking fills up, determining which partner has to work late and which will leave early enough to make it back before the nanny’s shift ends or the day care or after school program closes. “A lot of people say ‘I’ll just work on my commute. I’ll just send emails,'” Rizzardi said. “But it’s not easy if you’re standing on a crowded train.” Clocking out for the day before the other colleagues do might also raise questions, even if the parent got in early, she says.

After work, she would get dinner ready, give her daughter a bath, then work some more. Rizzardi made partner, but eventually the stress, commuting and a slew of illnesses that kept her daughter home caught up. She left her job.

Rizzardi, now a mother of two, pivoted. Real estate was one of her practice areas as an attorney and she decided to become a licensed real estate agent. She makes her own schedule with clients, many of them parents. And she is noticing the effect of long commutes on the housing market.

“Before they were looking for guest rooms,” Rizzardi says. “Now it’s ‘forget the guest room, where can I have a home office so I’m not in the living room with a laptop?’ They’re even converting sheds in the backyard to offices. They need to be somewhere where it’s quiet.”

Following are some tips for commuting parents.

— To make the most of time on the road, many commuting parents swear by audiobooks and podcasts.

— Negotiate a flexible schedule with your boss, such as working remotely on certain days or shifting your hours, such as arriving earlier or later to outsmart traffic.

— Try the “split shift”: logging in from home in the early hours or after the kids go to bed in lieu of spending the full day at the office, but disconnect from work during family time in between.

— Arrange to divvy up school drop-offs and pickups with your spouse.

— Cultivate a local support system, so a trusted friend or neighbor can get your child or organize a play date at a nearby park when you are running late — especially if parenting solo. Add their names to the “allowed to pick up” list at school.

— Don’t promise your child you will be there for her soccer game if there is even the slight possibility that your meeting will run long or you will be stuck on the freeway.

— If your commute makes you so late that you have to miss bedtime, try saying good night via FaceTime — but pull over first if you are driving, of course.

— Enlist a grandparent or hire a part-time nanny or a mother’s helper to assist with pickups, homework and after-school activities.