The oberoi hotel in new delhi got a major makeover. here is a first look. 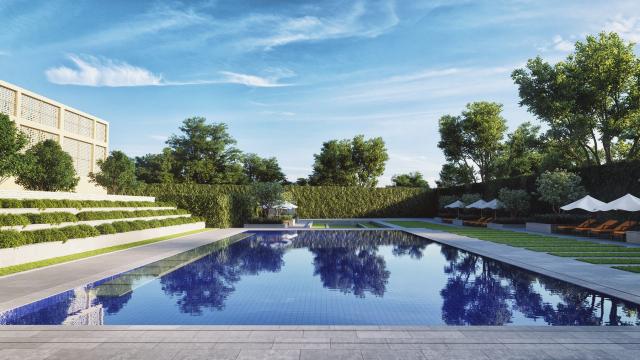 New Delhi’s Oberoi hotel has a dear place in my heart, as it does for many city natives. On special occasions, including my sixth birthday, my parents and grandmother would take my sister and me to the property’s restaurant, the Café, for afternoon tea and pastries — the flaky chocolate cake was a favorite. But my family’s affiliation with the property predated me: My mother, Kiran, and my father, Vikesh, used to frequent the Oberoi’s lobby in the early 1970s with their college friends; the hotel was the epicenter for India’s glitterati, and they were always on the lookout for a boldface sighting.

Now, the Oberoi, New Delhi has been reimagined as a more contemporary version of its old self and will debut a new look Jan. 1, when it reopens following a nearly $100 million renovation that kept the property shut for more than 20 months — the first closure in its history.

The Oberoi, New Delhi, which initially opened its doors in 1965, is set in the city center, overlooking the 16th-century garden tomb of Emperor Humayun, a UNESCO World Heritage Site. Rai Bahadur M.S. Oberoi founded his eponymous brand, the Oberoi Group, in 1934, and although the Delhi location was the fourth hotel in the company’s portfolio (there are now 32), it was the first that he actually had built from the ground up in an undertaking that lasted four years. Oberoi’s wife, Ishran Devi, laid the building’s foundation stone but before doing so, she placed five gold coins in the pit for good luck.

Prithvi Raj Singh Oberoi, the company’s current executive chairman and Rai Bahadur M.S. Oberoi’s son, said that, compared with the Oberoi’s other properties, the New Delhi location has the greatest sentiment for the Oberoi family.

“It’s a hotel my father had constructed from scratch, and it broke a lot of barriers when it opened,” he said.

Luxury accommodations abound in India today, but back then, the Oberoi was one of a kind; it lays claim to be the first property in the country to offer 24-hour room service and butler service as well as have a 24-hour restaurant. My father told me that soon after opening, it became known as the fanciest hotel India ever had. “There was nothing else like it,” he said.

A countless number of Indian and international luminaries stayed at the property over the course of its more than half-century existence including Queen Mathilde of Belgium; Giorgio Armani; the former prime minister of Australia, Tony Abbott; the former president of Afghanistan, Hamid Karzai; and the renowned Indian film actor Roshan Seth, who wrote in the Oberoi’s guest book: “There is an oasis of quiet, order and slanting shadows where the food is wickedly good and the service fit for a king; and, if you are lucky, they throw in a temptress, as wicked as they come, guaranteed to fire the imagination.”

Stories about the property are the stuff of legend all over India: The nightclub Tabela, for one, was part of the Oberoi’s opening in 1965 and quickly became one of the most desirable after-dark spots in the country. During the five hours Tabela was open, from 10 p.m. to 3 a.m., it was so crowded that crossing from one end of the room to the other took 10 minutes.

The blockbuster Bollywood movie “Silsila,” starring the superstar actor Amitabh Bachchan, was filmed partly at the property in 1980 and 1981. Bachchan stayed at the hotel during the shooting and came into Tabela one evening with five others where, according to a former staff member, he ordered “Champagne for everybody.” But instead of serving the group glasses of Champagne, as Bachchan had requested, their server mistakenly presented them with a half-dozen bottles. No matter — over the course of the night, they were all consumed.

Eventually, however, according to Oberoi, the hotel began to feel somewhat outdated. “Customers today are very demanding,” he said. “I travel often and stay in many hotels besides Oberoi’s, and I wanted a property that was luxurious by my standards and relevant for today.”

One of the biggest changes in the property’s new incarnation is larger guest rooms with spacious baths: Instead of 283, the old number, the Oberoi, New Delhi now has 220 rooms. Wi-Fi will go from being fast to super speed, and there will be both indoor and outdoor heated swimming pools. To help counter New Delhi’s increasingly problematic pollution, the hotel will have an indoor air purification system that it says prevents the entry of harmful air particles into the building. “Our guests will breathe the cleanest air possible,” Oberoi said.

The acclaimed New York City-based interior designer Adam Tihany is behind the property’s new, more contemporary aesthetic throughout the public spaces and in the guest rooms. “I wanted to bring the Oberoi into the 21st century without disrupting its DNA,” he said. “That means a look that’s brighter, less elaborate and a mix of old and new.”

For inspiration, Tihany looked to the English architect Sir Edwin Lutyens, who died in 1944, and had most of the furniture custom built in a typical Lutyens style that favors woods such as oak and teak. And while Tihany describes the white Italian marble baths as almost minimal, in a nod to traditional India much of the upholstery throughout the hotel is mostly in vivid colors: reds, pinks and blues.

And where will the Oberoi’s guests dine and imbibe?

Tabela and the beloved restaurant of my youth, the Café, are gone, but they have been replaced by seven new spots including Cirrus9, a rooftop bar that overlooks Humayun’s tomb; an Indian restaurant, Omya; and a fine-dining rooftop Chinese restaurant, Baoshuan, which offers a menu created in collaboration with the Michelin-starred London-based chef Andrew Wong, the chef and owner of A Wong.

My family immigrated to the United States three decades ago, but the Oberoi’s reopening is an occasion that we’re awaiting with much excitement — just like so many other Indians, whether they live there or abroad.