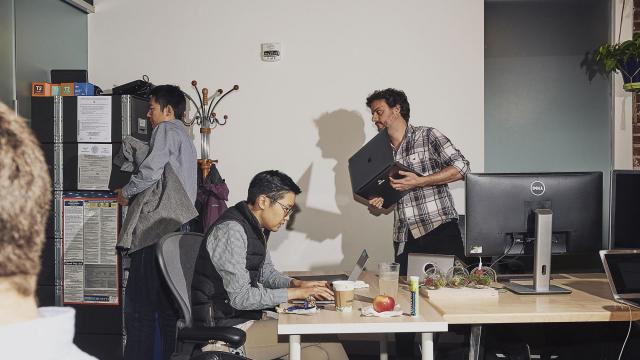 Christopher Savoie, founder and chief executive of a startup called Zapata, offered jobs this year to three scientists who specialize in an increasingly important technology called quantum computing. They accepted.

Several months later, the Cambridge, Massachusetts, company was still waiting for the State Department to approve visas for the specialists. All three are foreigners, born in Europe and Asia.

Whether the delays were the result of tougher immigration policy or just red tape, Savoie’s predicament was typical of a growing concern among U.S. businesses and universities: Unless policies and priorities change, they will have trouble attracting the talent needed to build quantum technology, which could make today’s computers look like toys.

It is a story that is being told repeatedly in the tech industry in the United States. As companies push into new technologies, they are finding it harder to identify qualified engineers and researchers. They are also facing tougher immigration rules for foreign-born tech experts and competing with tech centers in other countries, like Montreal, London, Paris and Beijing.

International competition is a particularly thorny issue in quantum computing because one of these machines — in theory — could crack the encryption that protects sensitive information inside governments and businesses around the world. If a quantum computer can be built, it will be exponentially more powerful than even today’s supercomputers.

Last month, the White House Office of Science and Technology Policy invited experts from government, industry and academia to Washington for a daylong policy meeting dedicated to quantum technologies. Several attendees, including Savoie, expressed concern that the Trump administration’s immigration policies could affect quantum research in academia and corporations.

“The concern is: Are we still the destination for the best and the brightest in science and engineering and technology?” said Roger Falcone, a professor of physics at the University of California, Berkeley, who attended the meeting in Washington.

It is a greater problem when there are not that many people who understand the technology. In a type of artificial intelligence called deep learning, for example, fewer than 25,000 people, by some estimates, can be considered genuine experts.

The labor pool in quantum computing is even smaller. By some accounts, fewer than 1,000 people in the world can claim to be doing leading research in the field.

The number of international students applying to physics doctoral programs in the United States fell by an average of 12 percent this year, according to a study from the American Physical Society. Universities on the coasts have maintained their numbers, the study said, but the drop is noticeable in the middle of the country.

For decades, quantum computing was purely experimental. When it was first proposed in the early 1980s, the goal was to build a system based on the seemingly magical principles of quantum mechanics. During the last several years, scientists have shown that they can build these machines, if only on a small scale.

With traditional computers, transistors store “bits” of information, and each bit is either a 1 or a 0. Those are the fundamental slices of data that tell a computer what to do.

When some types of matter are extremely small or extremely cold, they behave differently. That difference allows a quantum bit, or qubit, to store a combination of 1 and 0. Two qubits can hold four values at once. As the number of qubits grows, a quantum computer becomes exponentially more powerful.

Scientists who build these systems specialize in the physics of those very small or cold things, which is nothing like the physics we experience from day to day.

“There just aren’t that many people who know how to do this,” said Steven Girvin, a professor of physics at Yale University. “These machines are quasi-hand-built by Ph.D.s in physics.”

Over the last few years, some of the country’s largest tech companies, alongside a growing number of startups, have begun building quantum machines for commercial customers. They believe a quantum computer that can surpass what computers can do now is just years away.

Because these machines could eventually break today’s encryption, some believe there are reasons to be careful as large numbers of foreigners move into the field and to find ways of building a larger pool of American-born talent that can handle sensitive breakthroughs.

“We need to be cognizant” of the potential for academic and industrial espionage, said Paul Scharre, a senior fellow at the Center for a New American Security, a Washington think tank. “The answer is not to shut down the flow of people from abroad, but to find ways of better protecting intellectual property.”

As U.S. tech giants like Google, IBM, Intel and Microsoft accelerate their quantum computing efforts, work is speeding up in China and Europe as well. The Chinese government is working on a $10 billion national lab for quantum research in Hefei, set to open in 2020, and the Chinese e-commerce giant Alibaba is building a lab of its own. In 2016, the European Union invested 1 billion euros ($1.2 billion) in quantum computing.

The good news is no one has been able to build a commercially viable quantum computer so far, so there is time to fix the talent problem. Lawmakers and government officials are exploring strategies to help ensure that the pool of available talent grows.

Jacob Taylor, a veteran quantum researcher who oversees quantum strategy at the Office of Science and Technology Policy, played down concerns that other countries could beat the United States to quantum computing. “We have been the leader in this world for a long time,” he said. In artificial intelligence research, many worry that too much talent is moving from academia into industry, lured by high salaries, bonuses and stock options. In the quantum field, policymakers like Taylor hope to address this problem by funding projects at university and government labs.

Congress is considering a bill that would allocate $1.275 billion to quantum research from 2019 to 2023. The bill, the National Quantum Initiative Act, has passed the House and is awaiting a full vote in the Senate.

“I see the country at a crossroads with quantum information systems,” said Brian DeMarco, a professor of physics at the University of Illinois who specializes in quantum computing and has worked with government organizations on the technology. “I can see things not working out, where the balance is not good, and it derails our ability to compete.”