The New iPhones Look Fine, but My Old One Is Better Than Ever 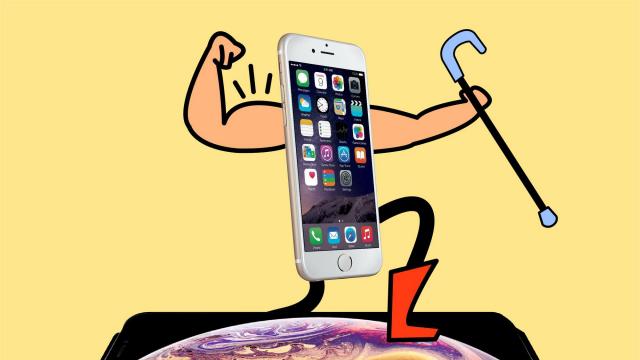 Apple’s new offerings are so good that I’m not buying a new iPhone.

I expect to save hundreds of dollars this year and enjoy what I’ve already got, because, thanks to Apple, my old iPhone 6 is performing better than ever.

This is the result of two unusual moves by the trillion-dollar corporation. One was Apple’s release this month of a new operating system that not only makes its new iPhones run well, but can also radically improve the performance of millions of old ones.

The other action was Apple’s decision last winter to let iPhone owners replace deteriorating batteries at a sharp discount under a program that continues through the end of the year. In combination, the two measures have thoroughly rejuvenated my old phone and have the potential to do so for many others.

I don’t attribute this to pure altruism on Apple management’s part. Making old products run well for a long time is truly “the right thing to do for our customers,” Tim Cook, the company’s chief executive, said about the battery replacement program. But it is also a smart business practice that can help Apple investors prosper over the long term, even if its actions deter some consumers buying new iPhones now.

Unless articles like this one spur millions of people to defer purchases, Apple may have found a business strategy that allows the company to have it both ways: Charge ever more money for fancy new phones, while enhancing its reputation by providing value-oriented consumers with reliable products that can last for years.

What’s the magic that has rejuvenated my iPhone and given it powers it didn’t possess when I first bought it, nearly four years ago?

The answer is mundane. My old iPhone started getting younger in February, when I took advantage of the Apple discount to replace the phone’s aging battery for $29, down from the usual $79 out-of-warranty fee.

Until last winter, I had never even thought of replacing an iPhone battery. I accepted that it would wear out every couple of years, and assumed that because of the way Apple had engineered the iPhone, the smart move was to replace the entire device with a new, improved model. My phone appeared to be on its last legs. It ran out of power in a few hours and sometimes shut down inexplicably.

But then came Apple’s “batterygate.” A furor arose as multiple iPhone owners reported that their devices were malfunctioning. It turned out that Apple had issued a new operating system that deliberately throttled speed when decaying batteries couldn’t cope with the normal tasks involved in running the phones.

Could this have been a case of planned obsolescence of a nefarious sort, the deliberate ruination of a perfectly good product to spur sales of a new one? I am not convinced that it was, although suspicions have been rampant for years that this kind of behavior might be standard for big tech companies. Facing widespread criticism, as well as lawsuits that are pending in California, Apple apologized late last year.

In a statement at the time, the company said it had meant well and had merely been trying to keep phones working longer. Critically, Apple said it would offer expedited services at lower prices for owners of old phones who wanted to replace their batteries. In March, the company also issued a minor operating system upgrade that made it easier for iPhone users to understand what was happening to their batteries.

While my new battery made my phone serviceable again, I still assumed I would have to replace it when Apple introduced the new models, and a new operating system, in September, as it does just about every year. New operating systems typically make old phones slow to a crawl.

But Apple executives said the new system, iOS 12, would be different. Older phones, going back to the 2013 model year, would work better this time, not worse. “We’re focusing our efforts especially on the oldest devices,” Craig Federighi, Apple’s senior vice president of software engineering, said in June. “While it’s still early days, we’re excited with the results that we’ve seen.”

Apple now reports that in test conditions, older phones are indeed running much faster after iOS 12 has been installed. For example, the company says, the camera app opens 70 percent faster, the keyboard starts 50 percent faster, and under a heavy workload, multiple apps work up to two times as fast. In a full review, Ars Technica, the Condé Nast website, found similarly impressive results.

I downloaded the new software and my phone works spectacularly now. Some people who installed iOS 12 have reported minor glitches, but that hasn’t been my experience. My phone can’t do everything the new iPhone Xs can do, but it seems fast enough to me.

Plus, it’s doing things it never did before. When I connect it with my car, for example, and start up CarPlay, I can now choose to see Google Maps on the dashboard, not Apple’s proprietary and, in my view, inferior mapping system. Allowing me to make that choice is the mark of a confident company.

A lot of other things are possible with my iPhone now. Searching for photos of family members is now staggeringly easy. Most important, the phone’s internal capacity seems to have been enlarged: I can read a book, switch to a magazine, start an audiobook app, return to The New York Times website, check my heartbeat and see how many miles I jogged this morning, all without crashing the phone.

Moderating this kind of addictive overuse is easier, too, thanks to functions that make it simpler to turn off annoying messages for extended periods. It’s like having a new, speedy phone, without having to buy one.

What’s the upside for Apple? By supporting my aging iPhone years after what might have been its sell-by date, the company has increased the odds that — when I do actually need a new phone — I will remain in the Apple universe, expensive as it may be to live there. My old phone, which cost $649 new, seems like a much better deal now, considering all the use I’m getting out of it.

Even before the latest changes, many people had been delaying buying a new phone. In Apple-speak, the iPhone replacement cycle has lengthened, and annual sales have not yet returned to the 2015 peak of 231 million units sold. As Toni Sacconaghi, senior analyst with Bernstein, points out, “If the iPhone replacement cycle continues to elongate meaningfully, that could undermine Apple’s fundamental economics."

But for Apple, the saving grace is a surge in the average sales price from $671 for all of 2015 to well over $700 for the first three quarters of this year. In a mature smartphone market, pushing the average price higher — and it’s rising at double-digit levels, the company says — is crucial to corporate growth.

As the most valuable company in the world, Apple can surely afford to treat its customers well. By doing so, it may be able to keep millions of people paying for increasingly expensive products. And if some of us wait a year or two because we’re happy with what we’ve got, it won’t be the end of Apple’s prosperous world.