The New Brothels: How Shady Landlords Play a Key Role in the Sex Trade 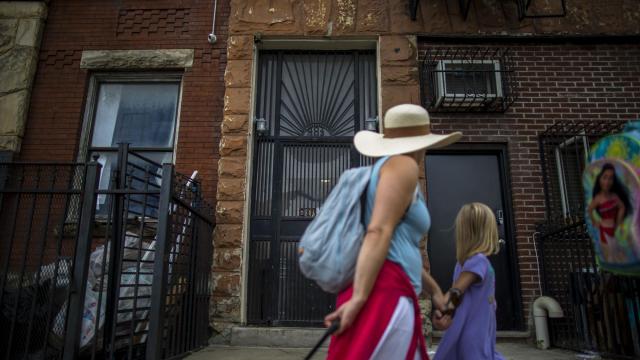 NEW YORK — Most tenants of a drab, four-story building in Park Slope, Brooklyn, knew about the brothel in their building. Strange men buzzed their apartments at all hours, looking nervous as they headed toward the same two apartments where many residents believed sex was being sold.

“I thought it was strange that he didn’t seem worried about it,” one woman who lived in the building for seven years said. “It was so out in the open.”

In September, the police broke up a large prostitution ring that had been protected by seven police officers. Prosecutors said the landlord of that Park Slope building, Isaac A. Schwartz, was in on it. He has pleaded not guilty to charges of enterprise corruption and conspiracy.

Known by his nickname, “Shragie,” Schwartz not only owned four of the buildings where the ring’s prostitutes worked, but he’s also been twice included on an official list of the city’s worst landlords.

A retired detective, Ludwig Paz, was charged with being the leader of the ring, which operated brothels in several buildings in Queens and central Brooklyn, but authorities said Schwartz also played a key role: finding locations for Paz.

In New York, gentrification has pushed prostitution indoors. Street walkers have all but disappeared. Prostitutes now advertise online, sex dates are arranged over the phone, and brothels operate inside apartments in residential neighborhoods.

As a result, landlords play an important role in the sex trade. By enlisting Schwartz , Paz avoided having a landlord report his activities to police, law enforcement officials said.

Efforts to rid the city of illegal sex have previously implicated prominent landlords, but police have had a difficult time proving the extent of an owner’s knowledge and involvement.

David M. Hoovler, a former federal prosecutor who is the district attorney in Orange County, New York, said the rise of human trafficking in the United States has resulted in an increasing number of landlords willing to participate in illegal activities. But it’s difficult to prove anything against them in court. “You have to have evidence that links them to the actual criminal enterprise,” Hoovler said. “They actually have to have the intent to participate in it. They have to derive a profit from it.”

Inspector James P. Klein, the commanding officer of the vice enforcement division, where Paz worked until 2010 and where he was working when he started his secret enterprise, said the police rely heavily on undercover operations and the city’s nuisance-abatement law to shut down brothels.

But landlords are rarely charged with a crime, he said, because police often don’t have enough evidence to show they are complicit, which results in a never-ending game of whack-a-mole; police shut down brothels and massage parlors, only to see another open in the same place or nearby.

Police said it remained unclear how Schwartz, who is 44 and lives with his wife in Midwood, Brooklyn, partnered with Paz.

But one law enforcement official, speaking on the condition of anonymity in order to discuss an open case, said that Schwartz spent several years “actively assisting” Paz and knew “exactly what kind of business was being conducted” in his buildings.

The former tenant in the Park Slope building, who spoke on the condition of anonymity because she feared retaliation by her previous landlord or his associates, said Schwartz’s response when she asked him why he tolerated having the sex trade in his building was, “They pay me good money.”

A business built on renovating ‘dumpsters’ and housing the homeless

In one of his appearances in housing court, Schwartz said that his business was built on buying buildings in distress — or what he called “dumpsters” — and turning them “into something.” His strategy depended on receiving city money to house the homeless.

“So mainly all of my real estate is put together from shelters,” he testified in 2016.

On numerous occasions, the city paid Schwartz to house the homeless in some of his buildings, court records show, including one at 880 Gates Ave. in Bedford-Stuyvesant, where authorities said a brothel operated.

But the brothel buildings comprised only a fraction of Schwartz’s larger portfolio. Through a network of shell companies, he owns at least 48 properties worth more than a combined $87 million, city records show. The companies all can be tied back to an entity called Pacific Management, which Schwartz still runs, with a partner, Mendy Lowy, from a cramped and cluttered office on Coney Island Avenue above a Pakistani bakery. (Lowy did not respond to several phone calls seeking comment.)

Schwartz has twice ended up on the public advocate for the city of New York’s list of the worst landlords. Eight of Schwartz’s buildings were on the city’s watch list last year, racking up more than 500 violations for problems such as water leaks, bulging walls and inadequate light and ventilation, officials said. Court records show that Schwartz and his companies have been sent to housing court more than 150 times recently. One of those proceedings involved Sven Britt, a musician who four years ago moved into an apartment in a high-rise at 2007 Foster Ave. that Schwartz purchased a decade ago, property records show.

Within a few months, a gas leak in the unit prompted National Grid to shut off the gas, Britt said. Then came a bedbug infestation. After that, Britt said, came a series of ceiling collapses so severe that he could see “daylight through the roof.”

But Britt noticed what appeared to be an even bigger problem: a brothel in the building.

Law enforcement officials said it can be difficult and expensive to investigate landlords like Schwartz who are suspected of profiting from prostitution, in part, because it is largely a cash business.

Hoovler, the Orange County district attorney, said his office spent months investigating a hotel chain in New Windsor, New York, after its managers agreed to give discounted room rates to an undercover police officer posing as a prostitute. Investigators pored over hotel and banking records and conducted wiretaps to confirm the hotel managers knew about the prostitution.

Authorities in New York City followed a different strategy in the 1970s during a campaign to push pornography and prostitution out of Midtown Manhattan. Rather than seeking indictments, the city went after landlords through their mortgages, taking advantage of standard clauses that allowed banks to foreclose on properties where illicit activity was taking place, said Sidney Baumgarten, a lawyer appointed by Mayor Abraham Beame during that era to lead the Midtown Law Enforcement Coordinating Committee. The city identified more than 450 illicit establishments between 59th Street and The Battery at Manhattan’s tip, Baumgarten said. The businesses were popular with landlords because they commanded higher rents and rampant official corruption during that time made them difficult to snuff out.

“You had a lot of people who were interested in keeping things going on this way,” Baumgarten said. “I tend to think that a lot of it is still going on.”

A paramedic who pays bail for kidnappers

Little in Schwartz’s history indicated he would eventually be accused of being involved in prostitution. At Britt’s housing court trial, Schwartz described himself as the hardworking son of a bakery owner from upstate New York.

Schwartz had another side job too — as a good Samaritan. He joined the East Midwood Volunteer Ambulance Corps in 2006, and served three years as an emergency medical technician. The president of the corps, Yakov Hornitzer, said Schwartz stood out as a dedicated worker who took many shifts and attended classes to enhance his knowledge of medicine. Three years later, Schwartz took the test to become a full-fledged paramedic and joined the Hatzolah ambulance service in Carnarsie.

A few years after that, he was tied to a bizarre kidnapping ring in New Jersey. He and his real estate partner, Lowy, signed two $1 million bonds securing the release of a pair of Orthodox Jewish men — one of them a rabbi — whom federal prosecutors charged with abduction and assault.

For hefty fees, the government said, the defendants would snatch reluctant husbands from the streets, would tie them up and beat them and sometimes shock them with Tasers until they agreed to divorce their wives.

Lawyers for the men, who are now in prison, said they did not know how Schwartz and Lowy knew their clients.

After his arrest last month, Schwartz pleaded not guilty and was released without bail on his own recognizance. By all accounts, he went back to work, barely missing a beat.

William Burgess, the superintendent at 880 Gates Ave., said that he had spoken with Schwartz five or six times recently about ordinary problems at the building.

“It’s business as usual,” he said.