The Met Should Be Open to All. The New Pay Policy Is a Mistake. 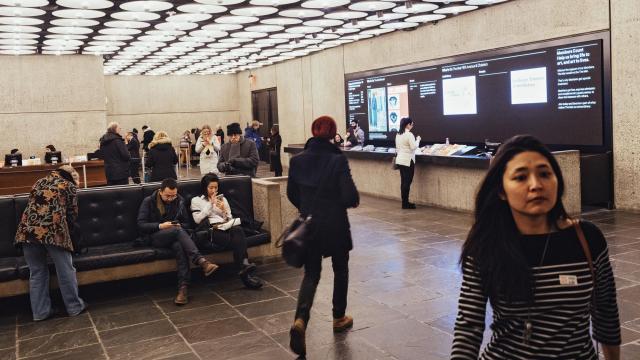 The Metropolitan Museum of Art’s new admission policy beginning in March will end pay-as-you-wish for out-of-state visitors, for the first time since 1970 — and residents of New York state will need to show some form of identification. The two chief art critics of The New York Times weighed in on the significance of these changes.

HOLLAND COTTER: Loopy as it may sound, on principle I believe major public museums should have universal free admission. You should be able to walk in off the street and see the art just as you can enter a public library and read the books on the shelf. If this country had a government that cared about its citizens rather than one that catered to its economic ruling class, we might be able to live some version of this ideal.

ROBERTA SMITH: I don’t think it’s loopy at all. If libraries started charging entrance fees there would be a great uproar. We don’t have to pay for access to publicly owned books, and we shouldn’t have to pay to see art in museums whose nonprofit status is supported by our taxes. Reading skills are seen as essential to the common good. Visual literacy is every bit as important, and if our culture and school systems placed more emphasis on learning about art, people would grow up with more of a museum habit.

COTTER: That economic ruling class, for its part, could, and should, contribute to an open-door cultural policy. I think of a very small example of the possibilities: Thanks to earmarked donations by a single patron (the Rubins, of the Rubin Museum of Art in Chelsea) the Bronx Museum of the Arts was able to begin a free admission program for several years that the museum continues today.

Which leads me to wonder about the civic good will behind — and institutional wisdom in accepting — another example of donor earmarking: the $65 million patron-inscribed fountains recently installed (and critically panned) at the Met. If the museum’s figures are accurate, and the new mandatory policy for out-of-state visitors will bring in $6 million to $11 million a year in admissions revenue; the money spent on the fountains would have covered that income for a decade.

SMITH: Someone should be able to figure this out without putting it on the public’s shoulders. The projected annual increase in admissions revenue — from $42 million to $50 million — seems minuscule, and they say it’s only going to affect 31 percent of its overall visitors anyway. So why not find the money somewhere else and affect zero percent?

The Met says that adults are paying less, owing partly to the lawsuit requiring the museum to refine its language at admission desks and on its website — from “recommended admission” to “suggested admission.” So hire a really good design firm to formulate some kind of counter campaign, signage with tons of jokes cajoling people who have the means to pay the suggested fee. Like “If you’re wearing mink, or a bespoke suit, or if your entire outfit totals out at more than $3,500, think about dropping $25 to visit the greatest museum in the world. You’ll be helping others who can’t afford your wardrobe.”

The Met’s David H. Koch Plaza is in its way a similar lack of imagination. The 1968 Roche Dinkeloo plaza design was gracious and spacious. Those new awful Darth Vaderish fountains take huge hunks out of the plaza and disrupt movement. Both Koch Plaza and the Met’s fixed admissions reflect something widespread: the continual degrading and privatization of public space.

COTTER: Given the fiscal realities the Met is dealing with at this point, whoever is to blame — the Met points to the precipitous 73 percent drop in visitors paying the full “suggested” amount — the new, graduated admission policy doesn’t strike me, purely in dollars-and-cents terms, as completely outrageous, particularly as a full price ticket is good for three days of admission to the three Met branches.

My big problem lies elsewhere. I’m instinctively suspicious of, and resistant to, “carding” procedures, meaning any admission policy based on presenting personal identification, which is what the Met is asking for from New York state residents who want to keep paying what they wish.

This potentially discriminates against a population of residents who either don’t have legal identification or are reluctant to show the identification they have. And it plays directly into the hands of the anti-immigrant sentiment that is now poisoning this country. I cannot remember a time when a museum’s unqualified demonstration of “doors open to all” would carry more positive — I would say necessary — political weight. This is my single biggest reservation about the Met’s admission-by-ID policy.

And even for legally documented citizens I see potential problems. The Met says it will not turn people away even if they don’t present an ID, though it will remind them to bring an ID on a return visit. I don’t know what kind of guidelines will be in place for delivering such “warnings,” but I can easily imagine a young person who may have no ID feeling discouraged from returning to the museum.

SMITH: And young people are very important. For example, the Met will allow students from New Jersey and Connecticut to pay as they wish. Why shouldn’t that apply to students everywhere? People want to bring manufacturing jobs back to the United States; a more visually literate society produces more people able to design things for factories to make. Museums directly inspire and cultivate talent and creativity. To exclude people from them is a loss that can be measured in economics, and happiness. The “pursuit of happiness” wasn’t mentioned in the Declaration of Independence because it sounds good. It is an important aspect of a nation’s health, on all fronts.

So I worry that the Met’s plan is classist, and nativist. It divides people into categories — rich and poor, native and foreign — which is exactly what this country does not need right now. I think this is tied to the abstract way wealth is accrued these days. In the last Gilded Age the rich had a much more literal sense of the suffering their fortunes were built on and a greater need to give back.

COTTER: In the pre-integration 1950s and early 1960s, the Birmingham Museum of Art in Alabama admitted black visitors only on Tuesdays. Technically, “everybody” could enter the museum, but only if they adhered to the admission policy. And that policy effectively discouraged an entire population from ever considering the museum anything but alien territory. I am very wary of potential psychological deterrents of this kind, not only as they impact the visitor population, but also as they affect the continuing viability of the Met itself, and other institutions that present themselves as being culturally comprehensive. They need, on every level, from the reception of visitors at the door to the experience of history delivered in the galleries, to make us know this is “our history, our place.”

SMITH: The Met says it is the only major museum in the world with a “pure” pay-as-you-wish policy. Their attitude is that all other museums charge one way or another, including for special exhibitions, as if to say: This is inevitable, and now we will too. Actually it should be just the opposite. Pay as you wish is a principle that should be upheld and defended, a point of great pride. The city should be equally proud of it. No one else has this, although they should. It indicates a kind of attitude, like having the Statue of Liberty in our harbor. It is, symbolically speaking, a beacon.