The media men who have been accused of sexual misconduct 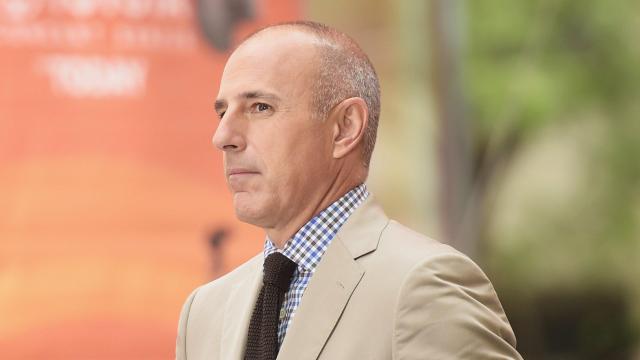 NEW YORK (CNNMoney) — Former NBC "Today" show host Matt Lauer is one of the latest -- and most prominent -- men in media to be toppled by allegations of sexual misconduct.

The industry reckoning began more than a year ago, when former Fox News host Gretchen Carlson claimed in a lawsuit that she was fired for refusing sexual advances from network head Roger Ailes. He left the network about two weeks later.

Since then, the names of have piled up: Bill O'Reilly, Harvey Weinstein, Kevin Spacey, Louis C.K., Mark Halperin and Michael Oreskes, among others.

More than a dozen men have been accused of sexual misconduct, harassment or assault in the past year. Here are some of the most prominent men in media and entertainment who have faced such accusations.

Ailes, the chairman and CEO of Fox News for 20 years, was hit with a sexual harassment lawsuit by Carlson on July 6, 2016. Ailes denied the accusations and called it a "retaliatory suit for the network's decision not to renew her contract."

Nearly two weeks later, Megyn Kelly, the former Fox News host who is now at NBC, accused Ailes of making unwanted sexual advances toward her early in her career at the network.

Ailes resigned July 21 of that year. After his departure, other women came forward with allegations. Carlson eventually settled with 21st Century Fox for $20 million.

Advertisers quickly began fleeing his enormously popular show, "The O'Reilly Factor." Within weeks, the show was canceled and O'Reilly left the network.

O'Reilly, 68, has denied the allegations and said reports about inappropriate behavior are an effort to remove him from the marketplace.

The powerful, Hollywood producer behind "Shakespeare in Love," "Good Will Hunting" and a number of other award-winning movies met his downfall after the Times published a story Oct. 5 that detailed numerous accusations of sexual harassment.

The Times report included nearly three decades' worth of allegations made by several women, including actress Ashley Judd. A subsequent report by Ronan Farrow that was published in the New Yorker went even further, and included allegations of sexual assault and rape.

Weinstein, 65, has denied any claims of nonconsensual sex. He was later fired from his own film company and his wife left him.

Price, the head of Amazon Studios and global content at Amazon Video, resigned Oct. 17 after he was accused of sexual harassment.

Price, 50, left the company five days after The Hollywood Reporter detailed harassment allegations made by Isa Hackett, a producer of the company's critically acclaimed series, "The Man in the High Castle."

Price had not publicly commented about the allegations.

Hundreds of women have come forward to accuse the Hollywood screenwriter and director of sexual harassment over a period of four decades, The Los Angeles Times reported in October.

According to the newspaper, the women said the alleged encounters with Toback occurred "In a hotel room, a movie trailer, a public park, meetings framed as interviews or auditions quickly turned sexual."

Toback's 200-plus accusers include actress Julianne Moore, the Times said. Toback has directed several films, including the 1987 comedy "The Pick-up Artist" and 1997's "Two Girls and a Guy."

Toback, 73, denied the allegations and told the Times that for that past 22 years it was "biologically impossible" for him to take part in the behavior described in the article because he has diabetes and a heart condition.

Halperin, who later became an NBC News analyst, has apologized twice and said that he "did pursue relationships with women" that he worked with but now understands "that my behavior was inappropriate and caused others pain." In a second statement he said "I apologize sincerely to the women I mistreated." He has also denied some of the allegations.

Halperin, 52, is considered one of the most influential political journalists in recent times. He co-authored the best-selling book "Game Change," which was made into an HBO movie.

Both NBC News and MSNBC have severed ties with him, and his publisher canceled plans to release a book he co-authored about the 2016 election.

The Academy Award-winning actor was accused of making an unwanted sexual advance toward another actor, Anthony Rapp, in 1986 when Rapp was 14, according to a BuzzFeed report published Oct. 29.

Production was soon halted on the sixth and final season of Netflix's "House of Cards," which stars Spacey. CNNMoney later reported on allegations of sexual harassment and assault made by current and former employees on the show.

The show's production company is still investigating accusations made against Spacey, and it suspended him from the show. Netflix, meanwhile, has said it will not be involved in the show if Spacey has any part in its future.

Spacey was also replaced in his upcoming award season film, "All the Money in the World."

Spacey, 58, said of Rapp's allegation that he did not remember the encounter, adding that if it did happen he owes him "the sincerest apology."

Spacey has starred in dozens of movies, television shows and theatre productions. Before "House of Cards," he was perhaps best known for his performances in "The Usual Suspects" and "American Beauty," for which he won two Oscars.

The top editor at NPR was placed on leave at the end of October after two women said he made unwanted sexual advances toward them. The incidents were alleged to have happened two decades ago when Oreskes worked at The New York Times and the women were seeking jobs there.

A third woman, who works at NPR, filed a complaint about Oreskes' behavior in 2015.

Oreskes, 63, admitted to wrongdoing in an internal memo, saying that his behavior "was wrong and inexcusable." He resigned Nov. 1.

Six women accused Hollywood director and producer Brett Ratner of sexual misconduct, according to a report in The Los Angeles Times published Nov. 1. The alleged incidents occurred in private homes, at industry events and on movie sets. Among the accusers was actress Natasha Henstridge, who told the Times that Ratner "forced her to perform oral sex."

Ratner, 48, denied the allegations through his attorney, calling them "outrageous" and "derogatory."

On Nov. 19, the newspaper published another report that detailed allegations of sexual misconduct made against Ratner and Russell Simmons, the co-founder of Def Jam Recordings. A woman quoted in the story said Ratner and Simmons, 60, were "in it together."

Ratner and Simmons denied the allegations, with Simmons adding that "abusing women in any way shape or form violates the very core of my being."

Ratner is known for directing the "Rush Hour" film series and "X-Men: The Last Stand."

The 50-year-old comedian, known for his FX series "Louie" and his comedy specials, apologized and said the stories were true.

"At the time, I said to myself that what I did was okay because I never showed a woman my dick without asking first, which is also true," he wrote. "But what I learned later in life, too late, is that when you have power over another person, asking them to look at your dick isn't a question. It's a predicament for them. The power I had over these women is that they admired me. And I wielded that power irresponsibly."

The release of his new movie, "I Love You, Daddy," was canceled. His publicist also dropped him, Netflix said it would no longer work with him on another stand-up special, and HBO nixed his planned appearance at a comedy special for charity that aired this month.

The star of Amazon Studio's "Transparent" was accused of harassing a colleague, according to a Nov. 8 report published by Deadline.

The website reported that Tambor's former assistant, Van Barnes, said he "made lewd, sexually suggestive and unwelcome remarks to her on a number of occasions."

After that accusation became public, "Transparent" actress Trace Lysette tweeted that Tambor physically pushed himself on her while on set.

Tambor, 73, is being investigated by Amazon, according to Deadline. He has said that the allegations are "simply and utterly untrue."

But he's also signaled that he may not return to the show, saying in a statement last week that "given the politicized atmosphere that seems to have afflicted our set, I don't see how I can return to 'Transparent.'"

Tambor has worked for decades in Hollywood and has appeared in dozens of movies and television shows, including "Hellboy" and "Arrested Development."

The New York Times suspended its star political reporter Nov. 20 after he was accused of inappropriate sexual behavior.

A story published that day by the website Vox.com said that Thrush, 50, has "a history of bad judgment around young women journalists."

The story included allegations from three women, as well as from the article's author Laura McGann. They accused Thrush of unwanted groping and kissing, as well as "hazy sexual encounters that played out under the influence of alcohol."

Thrush in a statement apologized "to any woman who felt uncomfortable in my presence and for any situation where I behaved inappropriately."

The co-host of "CBS This Morning" was fired Nov. 21 after eight women accused him of sexual harassment.

The Washington Post published a story in which women accused Rose of groping, unwanted sexual advances and inappropriate phone calls.

Rose, who was also a "60 Minutes" correspondent and the star of his own PBS interview program, was fired by CBS News and PBS a day after the story broke.

Rose told the newspaper that he apologized for the behavior, adding that he was "greatly embarrassed."

"I have behaved insensitively at times, and I accept responsibility for that, though I do not believe that all of these allegations are accurate," he said in a statement. "I always felt that I was pursuing shared feelings, even though I now realize I was mistaken."

The chief creative officer of Pixar and Disney Animation took a leave of absence from the company last week following what he called "missteps."

That announcement came after a Pixar employee told The Hollywood Reporter in a Nov. 21 report that Lasseter is known for "grabbing, kissing, making comments about physical attributes."

In an internal memo sent to Disney employees, Lasseter said it had been "brought to my attention that I have made some of you feel disrespected or uncomfortable. That was never my intent."

"It's never easy to face your missteps, but it's the only way to learn from them

Lauer was fired from NBC News on Wednesday after an employee filed a complaint about "inappropriate sexual behavior in the workplace," according to a statement from the network.

NBC News chairman Andrew Lack said in a memo to staff that it was the first complaint lodged against Lauer since he started working there more than 20 years ago.

But Lack added that "we were also presented with reason to believe this may not have been an isolated incident."

The former host of "A Prairie Home Companion" was fired by Minnesota Public Radio on Wednesday because of "allegations of his inappropriate behavior with an individual who worked with him."

After his exit, Keillor stayed as an executive producer on the homespun variety show. Now MPR says it is terminating its contracts with Garrison Keillor and his private media companies.

Keillor addressed his dismissal on his website, saying "I've been fired over a story that I think is more interesting and more complicated than the version MPR heard.

"It's some sort of poetic irony to be knocked off the air by a story, having told so many of them myself, but I'm 75 and don't have any interest in arguing about this," he said.