This is the man who would replace Rod Rosenstein 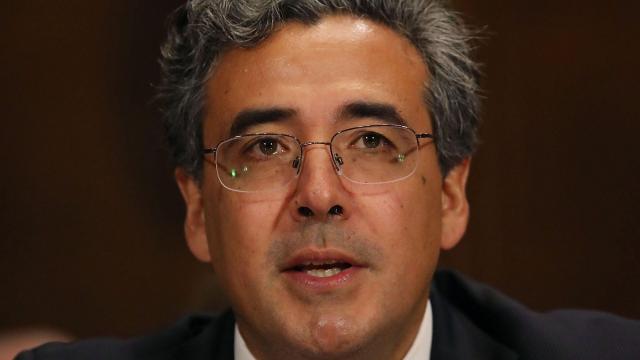 (CNN) — The potential departure of Deputy Attorney General Rod Rosenstein from the Justice Department would mean that oversight and management of the sensitive Russia probe would fall to a longtime conservative lawyer with ties to the White House, Noel Francisco.

Francisco has been the solicitor general for a year, and in that time has defended the Trump administration's positions before the Supreme Court.

He has a history of defending the authority of the executive branch, including when it comes to the ability to remove certain appointees, which is sure to be scrutinized if he were to take over the closely watched probe that has already brought down allies of the President.

The solicitor general is the fourth in line of succession at the Justice Department, but with the associate attorney general spot still vacant since Rachel Brand departed, and with Attorney General Jeff Sessions recused from matters involving the Russia investigation, Francisco would take over Rosenstein's responsibilities regarding special counsel Robert Mueller's probe once the deputy attorney general leaves.

Francisco is a longtime conservative lawyer who was confirmed in September 2017 to the role of solicitor general, the Justice Department's top Supreme Court litigator.

In that time, he has drawn speculation about his feelings on the Mueller probe for his arguments on executive authority. In a recent Supreme Court case, Francisco argued for presidential authority to remove administrative law judges, seen by some court watchers as a potential groundwork for presidential power over the special counsel.

Before taking the job, Francisco was a lawyer at Jones Day and was a colleague of outgoing White House Counsel Don McGahn. In fact, at an event last week with the conservative Federalist Society legal group, Francisco mentioned his friend and classmate McGahn and said it was the single best thing in his career to recruit McGahn to Jones Day.

He ended his remarks previewing the upcoming Supreme Court term by telling the crowd that he's learned to stay on his toes.

"Of course, if my first year on the job has taught me anything, it's to expect the unexpected," Francisco said. "We don't have to look far to see that that is a rule that we should all understand is before us."

McGahn is set to depart the White House this fall.

Francisco has argued multiple cases before the Supreme Court before taking on the job, including successfully representing former Virginia Gov. Bob McDonnell in his overturned bribery case. Francisco also served under former President George W. Bush as a counsel in the White House and deputy assistant attorney general.

In 2007, Francisco spoke to C-SPAN about his understanding of the Justice Department's independence, saying "there's a bit of a misunderstanding" about what the independence actually means.

Francisco said the attorney general's independence applies to a narrow slice of the job, primarily in terms of prosecutions.

As a partner at Jones Day, Francisco said in a 2007 congressional hearing on the firing of eight US attorneys that "it is the President's exclusive prerogative to appoint and remove United States attorneys."

At the same hearing, Francisco cast a dim view on the role of independent or special counsel appointments.

"My own personal belief is that when you hand these issues off to the career prosecutors in the public integrity sections in the US attorneys' offices in the Department of Justice, those attorneys are generally better able to assess whether a case should be pursued," he testified.

Francisco would take on duties related to oversight of the probe into Russian interference in the 2016 election should the deputy attorney general leave, which would ensure that his past work would come under scrutiny given the sensitivity of that investigation.

Jones Day advised the Trump campaign, which Democrats might suggest should prompt Francisco to recuse himself as well. It is not clear how involved Francisco was in the firm's advisory role or whether sufficient time has passed that would make recusal unnecessary.

Francisco has also worked on a number of hot-button cases as solicitor general, defending the Trump administration's positions.

He defended the travel ban, supported a cake maker who refused to make a wedding cake for a same-sex couple and sought to block an undocumented teen in government custody from getting an abortion. He also oversaw the government's switching of positions from the previous administration in multiple cases, including one involving Obamacare.

Still, Francisco has also shown a hint of independence, appearing at dinner with Sessions and Rosenstein as they were being attacked by the President in what was interpreted as a show of solidarity.

He clerked for the late Justice Antonin Scalia and features Scalia's picture prominently in his office.

Hank Asbill, a white collar defense attorney who worked with Francisco for eight years said his former law firm partner is "a very smart, very ethical guy" that will "carefully" examine the issues.

In taking over the role of overseeing the Mueller investigation, Francisco would be asked to sign off on certain decisions arising from that investigation, such as issuing subpoenas, the breadth of the investigation, or reviewing Mueller's report and its submission to Congress.

Asbill said he does not know Francisco's view on the legality of the special counsel, but said he would not be driven by anything other than the law.

"I think Noel would make the right decision for not just himself personally, but for whatever he perceives his legal obligations to be at the time," he said. "He would let that drive it as opposed to any personal considerations."

Asbill and Francisco represented McDonnell together, winning a reversal of his conviction on public corruption before the Supreme Court. The victory is widely viewed as making it more difficult for prosecutors to bring public corruption charges against individuals.