The Magic of the Food Gift Swap 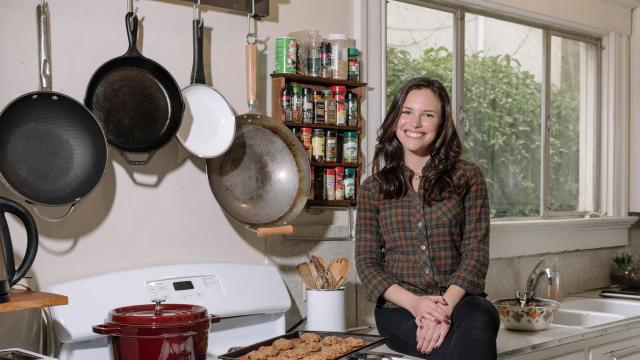 Opening a package of homemade food mailed by a stranger and eating the contents seems like the last thing anyone would want to do at a time when distrust and fear seem woven into our national psyche.

But that’s just what Liz Larkin, 52, who runs a home-baking business in Pound Ridge, New York, intends to do this month, when she’ll ship off a box of cookies and scones to someone she has never met while she waits for that person to send back another box filled with gifts from the kitchen.

“It sounds a little weird, right?” Larkin said. “But connecting with a stranger like this is just a cool thing to do. Doing good is kind of contagious.”

Like many cooks who turn to food as a gift, she knows the magic that can come from trading something delicious and homemade with another cook. But neighborhood cookie swaps and even more informal exchanges are increasingly hard to find.

A hunger for that kind of relationship was part of what drew Larkin to the holiday food exchange organized through the website Food52, in which cooks swap boxes filled with homemade treats and hand-selected gifts.

This year, 1,107 people from 15 countries have signed on, a record for the effort. Since it started eight years ago, the swap has kindled enduring friendships and, for some, has become their favorite holiday tradition.

Adrienne Kerrigan, a food writer in Seattle, has been a devotee of the exchange for years. Five years ago, she was randomly matched with someone who discovered through the swap organizer that Kerrigan was about to have a newborn. So he and his partner packed up a swaddling blanket and a frozen container of something they called “apples cooked forever.” The couple included a note explaining that they had fed the long-cooked apples to their own baby. That batch became one of the first solid foods Kerrigan fed hers. Then there was the woman from St. Paul, Minnesota, who sent Nina Wladkowski a box of wild rice and maple syrup, along with some gifts from her garden that included shallots, sweet potatoes and the only five peanuts she had managed to coax from the ground that year.

“The fact that she couldn’t grow that many peanuts but she decided to sent the entire little harvest to a stranger in Alaska really touched me,” said Wladkowski, 29, who works in the advertising department at the Anchorage Daily News.

She shipped back a jar of homemade jam and a thank-you note. “People always talk about food bringing people together, but this kind of broadens that table to a national and international table,” she said.

The Food52 swap started as a procrastination project for Noëlle Bittner, who was studying evolutionary biology at the University of Arizona in Tucson.

When she wanted to avoid studying, Bittner would dip into the nascent Food52 website, which she discovered in 2010, when it was more a small community of like-minded cooks exchanging recipes than the full-blown cooking and retail site it is today.

She watched as the site’s regulars organized gatherings of food-minded people in New York and longed for some of that camaraderie.

Around the same time, she stumbled across the Secret Santa exchange that Reddit, the website with a collection of more than 1 million online communities, had started a couple of years earlier. Food packages — like Russian chocolate, vegan snack packs and plenty of coffee and tea — are only some of the gifts traded among the tens of thousands of people who participate in that exchange.

Why not try a similar thing, she thought, but with people who really want to cook for one another? She posted her idea on Food52.

About 110 people responded, and Bittner matched them by hand. Now, the exchange has grown so big she has added spreadsheets and written software to coordinate the pairings, which are random. She won’t be swayed by people who are lobbying to be matched with gift-givers who are known to send fabulous packages or who are in a nearby ZIP code.

She makes exceptions for people who live outside the United States — trying, for example, to keep people in Europe or Canada together — or who have specific dietary needs. “Like, I try to match gluten-free people with gluten-free people,” she said.

The packages, which must be shipped by Dec. 10, are supposed to have a value of $25, whether in actual dollars, or the time and effort to make them. Bittner advises swappers to “gift as you would like to be gifted.” Many go overboard, using the little bit of information they have about their intended recipient as a conduit to deeper online investigations, so they can send a superior package.

Photos of the gifts are posted on Instagram, where they serve as both inspiration and fodder for commentary. The feed is filled with pictures of pickled jalapeños, loaves of marbled rye, cardamom shortbread, pistachio jaggery brittle, bourbon balls and brownies. Dorie Greenspan’s World Peace Cookies are popular. Homesick New Yorkers even get bagels.

There aren’t many complaints, and there have been no conflicts that have exploded into online flames, Bittner said. A few people have written in because they received a store-bought gift or felt their package was underwhelming in some other way. She tells them that is the nature of the exchange, and suggests tolerance.

“A lot of the time when people get pre-made gifts, it’s usually because someone had a last-minute family emergency,” she said. “I think people are receptive that life can be complicated.”

Participants are encouraged to donate $5 to a charity. This year, it’s Action Against Hunger. They’ve raised about $12,600 so far. Food52 adds to the pot.

Amanda Hesser, a former editor and columnist at The New York Times who founded Food52 with Merrill Stubbs (both of whom participate in the swap), said the project stands out in an age where so much of life plays out online.

“There’s something thrilling about receiving a box of goodies from a stranger, who has taken time to bake their favorite cookie recipe for you and package it up with pickles from a local maker or a wooden spoon carved by their uncle,” she said.

The same ethos drives local food swaps, which started to rise up about a decade ago along with the do-it-yourself food culture, said Emily Paster, a preserve-maker and blogger who wrote the 2016 book “Food Swap: Specialty Recipes for Bartering, Sharing & Giving — Including the World’s Best Salted Caramel Sauce.”

Paster started a food-swap group in Chicago in 2011; it hosts a much-anticipated holiday gift swap in December. People show up to trade homemade limoncello and vanilla extract, or packages of custom soup mixes and holiday candies.

People often ask her if exchanging food with strangers is safe.

“I say, ‘Well, the good news is you get to talk to the person before you trade food, but of course you don’t know what they are doing in their kitchen,'” she said. “'But if you go to a church potluck, you don’t know what they’re doing, either.'” The beauty of exchanging homemade food, she said, is getting to know other people who value making food from scratch as much as you do.

Although it’s too late to sign up for this year’s Food52 swap, it’s not too late to organize a little holiday food swap with your own friends or family.

Edible gift exchanges ease the financial pressure of giving and can help build community and goodwill. And the stakes are lower with a box of chai-tea eggnog cookies than with a sweater.

“People buy you expensive gifts that bomb, and then what do you do?” Paster said. “At least you know a food gift was made with love, and you can always put it in the compost.”