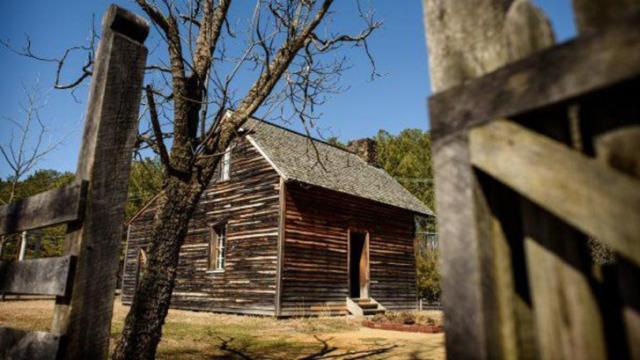 Not for battle this time, but in hopes of ending the bloodiest war ever fought in the Western Hemisphere.

As Johnston loped toward his Union adversary, he faced a decision: Would he end things quickly and cleanly, a surgical stroke to end the Civil War? Or would he follow the wishes of the Confederacy's president, scattering his forces into a festering guerrilla war?

Johnston was weary of war. And, as he approached the mud-spattered opponent on the road just west of Durham, he saw a man equally weary.

But the largest surrender on the American continents - and the one that kept the Civil War from sinking into long-running partisan skirmishes - came nearly two weeks later at a family farmhouse near Durham called Bennett Place.

"It's a fact, but the facts don't fit the narrative people were raised on," said John Guss, site director at Bennett Place State Historical Site, which preserves the site of Johnston's surrender to Sherman. "People think that when Lee surrendered, the war was over, right?

"But when you realize that a larger Confederate force was still out there, still able to fight - then, no, this war wasn't over."

"This army was not surrounded, like Lee's was. They could easily have packed up and headed for the hills. Things could have gotten a whole lot uglier."

But it didn't, thanks to two generals tired of mud and thoroughly mistrusted by their respective governments.

If Averasboro and Bentonville had proven one thing to Sherman, it was that his foe would still fight.

The Union suffered more than 2,000 casualties in sharp fighting in March, far more than during the entire campaign from Atlanta to Fayetteville. And the Confederate army under Johnston escaped as Sherman's forces advanced to Goldsboro to resupply.

Still, it was clear the war was winding down. In Virginia, Grant was trying to pin Lee down. In North Carolina, Sherman could force the issue with a bloody campaign.

"Grant and Sherman were planning a hammer-and-anvil operation," said historian Jim Leutze. "The idea was to get Lee and Johnston together, pin the armies between them in Virginia and finish the fight.

"It became a moot point when Lee surrendered at Appomattox."

Lee's surrender of the Army of Northern Virginia on April 9, 1865, freed Sherman to end things in the South.

"Sherman was a very interesting guy," Leutze said. "He wasn't the stupid brute many in the South would like to paint him. He believed the only legitimate object of war was to secure a more perfect peace.

"Ending the disorder of rebellion, not the people he fought, was his goal. Whatever it took, he would do it."

Sherman's army entered Raleigh, which surrendered without a shot, on April 13. In response, the general issued orders that forbade foraging and destruction in the city.

"In the South, Sherman has been painted as the villain," said historian Wade Sokolosky. "But it's not that simple."

Raleigh, which feared his scorched-earth reputation, was the only town in the Carolinas campaign that saw no intentional damage from Sherman's forces.

As the Confederate cabinet - on the run from Richmond, Virginia - reached Greensboro, Johnston discussed his army's fate with Confederate President Jefferson Davis. Davis was adamant: fight on.

Johnston's view that "it would be the greatest of human crimes to continue the war" prevailed. He sent word to Sherman asking for "a temporary suspension of active operations" and a meeting April 17 to make "arrangements to terminate the existing war."

The wording was important. Johnston was not simply seeking to surrender his command. He wanted to end the Civil War altogether. It was a tone that resonated with Sherman.

"Sherman was far more interested in the long-range results," Leutze said. "He saw that surrendering of Johnston's army was one step, but only one step. It seems strange, given his reputation, but Sherman embraced Abraham Lincoln's lenient vision for a postwar nation."

Bennett Place, a small farmhouse just west of Durham Station, was chosen by an accident of timing. The generals had agreed to meet midway between Durham and Hillsborough.

Johnston and his guard were a couple of miles past the farmhouse of James and Nancy Bennett when they met Sherman and his escort.

Johnston suggested backtracking to the Bennett house, which had served as a bed-and-breakfast in the past. Sherman agreed, and soon the family was tucked in the nearby kitchen as the generals began talking.

Johnston's aides included South Carolina Gen. Wade Hampton, who declined to shake hands with Sherman. Hampton blamed Sherman for the burning of his home, and the two had sniped at each other in the press, including in The Fayetteville Observer.

"Legend has it that while their generals were inside ending the war, Hampton and (Union Gen. Judson) Kilpatrick were outside ready to start a new one," Guss said. "Their subordinates had to separate the two more than once.

"In fact, when the surrender was announced, Hampton would have no part of it. He took several men and planned to continue fighting. He got south of Charlotte when he finally ran out of gas and just went home."

Sherman had more than the surrender on his mind. As his train was preparing to leave Raleigh for Durham that morning, the general received a coded telegram from Secretary of War Edwin Stanton: "President Lincoln was murdered about 10 p.m. last night in his box at Ford's Theatre."

The first person he shared the news with was Johnston, and then only after the two were alone. Sherman later recalled that, as Johnston learned the news, "perspiration came out in large drops on his forehead, and he did not attempt to conceal his distress."

Sherman was prepared to offer Johnston the same terms Grant gave Lee. Johnston offered something more: as long as they were talking peace, why not just end the whole war?

If Sherman agreed, Johnston said, "instead of surrendering piecemeal, we might arrange terms that would embrace all the Confederate armies."

If not, Johnston noted, he could tell his men to melt into the hills and the nation would be subjected to a grueling guerrilla war.

Johnston was fishing, and Sherman took the bait. He returned to Raleigh that evening to discuss the matter with his generals, who agreed with the concept. Johnston returned to Greensboro to apprise the cabinet.

When the generals met at Bennett Place the next day, Johnston brought Confederate Secretary of War John Breckenridge. Breckenridge was a lawyer, former vice president, a Confederate general and a shrewd politician. By the time the day was done, a treaty had been written to surrender all arms, recognize state governments in the South, provide a general amnesty for the Confederate cabinet and establish federal courts.

"In general terms," Sherman wrote, "amnesty, so far as the Executive of the United States can command, on condition of the disbandment of the Confederate armies, the distribution of the arms, and the resumption of peaceful pursuits by the officers and men hitherto composing said armies."

Sherman reached for the moon. He grasped a hornet's nest. When news of the surrender terms reached Washington, politicians howled and publications called Sherman a traitor, suggesting he had been bought with Confederate gold.

Secretary of War Stanton sent Grant to Raleigh to get the army ready for another fight. In Grant's view, however, "Sherman's terms were unacceptable and improper, but he was no traitor. ... At worst, he had broadly construed Lincoln's lenient sentiments."

Grant saw no sense in resuming hostilities, unless Johnston wanted to fight.

He didn't. Ordered by Jefferson Davis to lead what was left of the army into the hills, Johnston refused.

With Grant running interference, the two generals regarded as traitors by their own governments patched up the peace on April 26. The terms were similar to those given at Appomattox:

No Confederate soldiers would be taken into custody; they simply would sign a parole and go home.

Officers and other ranks would be allowed to keep their horses.

Officers were allowed to keep their side arms.

With the fighting ended, Sherman the monster became Sherman the merciful. He ordered field rations for hungry Confederate soldiers. He issued orders forbidding foraging, then ordered commanders to loan captured horses, mules and wagons to families to aid in spring planting. He also ordered distribution of corn, meal and flour to civilians.

"Sherman understood the South," Sokolosky said. "He knew the people. He knew that giving the South dignity would go a long way toward healing wounds."

Confederates who mustered out in Greensboro on May 1-2 also received their last pay: one Mexican silver dollar from a cache of silver that Johnston had reserved for them.

Many of the men returned home with small strips of colored cloth. Rather than surrender their company flags, most units chose to either burn them or rip them into small pieces as keepsakes.

"I'm willing to bet over the next 100 years, there were descendants of these men who found these strips of cloth among their dad's keepsakes," Guss said. "They probably wondered what the heck it was."

Soon, Bennett Place was a farm again. Some of Sherman's officers ran off with the drop-leaf table on which the surrender was crafted.

Sherman returned to Washington, where his troops staged a big parade before disbanding. When Grant became president in 1869, he named Sherman commanding general of the Army, a position he held until 1883.

Johnston returned to civilian life as a businessman and congressman. He and Sherman became friends. In 1891, Johnston was an honorary pallbearer at Sherman's funeral, which hastened his own death.

Johnston kept his hat off as a sign of respect, despite a cold rain.

"If I were in his place and he were standing here in mine, he would not put on his hat," Johnston said.

A few weeks later, he died of pneumonia.

Bennett Place did not survive. After the war, the family left and the house fell into disrepair. It burned in 1921.

"Sherman didn't like journalists, but he didn't mind illustrators, it seems," Guss said. "He asked Johnston to pose with him at the table in the Bennett House. That's how we're able to have an exact replica of the interior."

Today's restored model of the Bennett family farmhouse offers a look into the daily life of a small Southern family in the 1800s.

"People can stand on the road where the generals met," Guss said. "Battlefields might be remembered, but this is a place that brought peace."

One dangerous part of the war is alive and well. Live ammunition, left behind when Confederate forces went home, are often found across the Piedmont.

"It makes sense that in a battlefield site like Bentonville, you'd expect to find shells and bullets," Guss said. "There's no reason for people to think about that around here. People don't know there was a skirmish near Chapel Hill on April 17. They don't know about the encampments of thousands of soldiers nearby.

"A few weeks ago, a man was out walking his dog in Chapel Hill after a heavy rain. He looked down and, what do you know? A cannonball, still primed.

"They may be old, but they're still volatile. They can kill you just as dead."

Staff writer Chick Jacobs can be reached at jacobsc@fayobserver.com or 486-3515.