The Latest in Apartment Technology: Fridge Cams and Robotic Valets 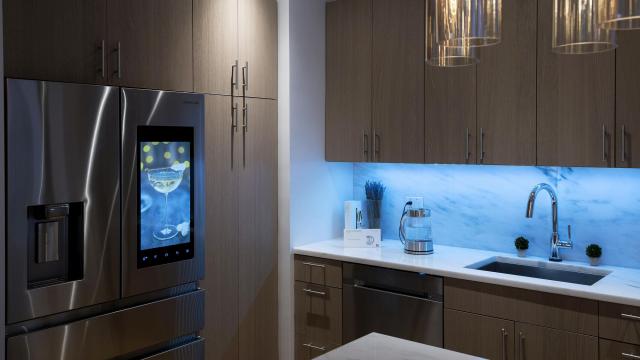 NEW YORK — The latest in technology for apartments encourages residents not to lift a finger, except maybe to touch their phones.

Developers are certain that buyers want gadgets that could, say, help shuffle boxes of books to storage areas, or allow a peek inside the refrigerator when they’re at the grocery store and can’t remember if they need milk.

These digital amenities, which are controlled by voice commands and smartphone apps and use robots, are turning up across the New York area in condos, co-ops and rentals, even if users may have to contend with a few glitches. Users may also have to pay a premium.

Yet, to not plug in, developers say, would be to lose out.

“It’s not about the future,” said Elena Ashkinazy, a manager at Time Equities, the developer listing a two-bedroom co-op on the Upper East Side called the “smart apart” for its futuristic features. This apartment includes a fridge that has three cameras inside that are accessible remotely. “The time is here,” Ashkinazy said, “and we have to be up-to-date.”

This latest crop of cutting-edge features includes an all-in-one furniture system designed to save space by expanding or contracting at the flick of a switch. It is available in rental projects in New Jersey and Manhattan, including at the Riverbend District, a mixed-use complex under construction in Harrison, New Jersey, from DeBartolo Development and Advance Realty. Renters in the first 286-unit phase of the project, called Steel Works, are about to be given the option of leasing a telescoping bed-and-dresser system designed by Ori Systems, a startup.

At night, renters can slide out a hidden bed, by manually pressing a switch; tapping their phones; or through voice-assistant software, which in Steel Works’ case means via Echo Dot. This puck-size Amazon.com device comes with all units.

In the morning, the bed can retract inside the Ori unit, which is plugged into a wall and mounted on a track, allowing the entire unit to be moved to create a larger living space for entertaining. The unit, lined with hanging rods and drawers, is made of poplar plywood and also has a surface that can be extended for a desk.

Ori, which takes its name from “origami,” is expected to be most popular with renters of storage-challenged studios. The technology could help avoid the hassle of folding futons every morning, though it still may have to work out some kinks.

During a planned demonstration earlier this month, the bed could not be extended automatically because a “power surge” had disabled part of its motor, according to building managers. But the bed could still trundle manually, which is important in the case of a blackout, representatives of Steel Works said.

The voice-activation feature was also not working. Steven Shaw, a DeBartolo manager, later said this was because a Wi-Fi connection had not yet been set up.

For an Ori unit, renters would likely pay an extra $350 a month, in a building where studio rents start at about $1,900 a month, Shaw said, though final pricing had not yet been set. But Shaw said he expected the unit to catch on with renters in the next four phases of the 35-acre Riverbend District. About 20 percent of the additional 2,700 apartments in the project will be the kind of studios with layouts well-suited for an Ori unit. “I think it will be well received by those who are making the transition from college to apartment life, who don’t really have any furniture yet, and are looking for value,” he said.

Ori is also available at the Eugene, an 844-unit rental from Brookfield Property Partners in Manhattan’s Hudson Yards. And it is being tested out in about a half-dozen other cities, said Hasier Larrea, Ori’s founder and chief executive. Larrea added that units are priced to developers at about $10,000 a piece.

At 520 W. 28th St., a 39-unit condo on the High Line from the Related Cos., tech offerings include mechanized storage. (The condo was designed by Zaha Hadid, who died in 2016.) To put personal belongings in a storage unit, residents can bring their things to a spacious room in the basement, enter a code on a keypad, then wait a few minutes while the storage unit is transported to them. (Residents could also enter the code on their phones before they get downstairs.) A door swings open, and residents can step inside a retrieved unit, a shipping container-like bin that measures 7 feet high, 7 feet wide and up to 15 feet deep.

Retrieving those bins is the responsibility of robots that resemble the thin, rectangular pallets used for moving freight. The metal robot pallets have scanners on their undersides and are programmed to find their way by reading squares on the floor that are dotted with bar codes. During a test run this fall, as the machines slowly glided, white lights flickered on their sides like strobes.

The building’s five robots were created by the Park Plus company of Fairview, New Jersey, which will keep an eye on the system from its offices. The robots can handle 10,000 pounds each, which will also allow them to haul cars to parking spaces in a sort of automated valet system. Both the parking and storage systems should be fully operational next month.

A conventional parking garage and storage room would have eaten up valuable space, said Greg Gushee, a senior vice president at Related. Instead, square footage at the condo was freed up for amenities like a swimming pool, Gushee added. Besides, he said, “you don’t have to see everybody else’s stuff, and your stuff is much more secure.”

Gushee said that a “handful” of storage units and parking spaces had been sold so far, but that Related was holding some back for future buyers. The condo is about 50 percent sold, he said.

Skeptics argue that buyers generally care more about size, location and views, than about gizmos. “Expect developers and property managers to go to quirky new lengths to assure prospective tenants that their buildings are unique,” analysts for Streeteasy.com said in a recent report focused on 2018 predictions. But, the report added, “even most New Yorkers able to pay $3,700 for a studio would prefer to pay $3,600 in the building across the street.” At that uptown co-op that Time Equities recently gut renovated, at 315 E. 88th St., about every beep and whistle seems to have been deployed to prove its tech bona fides. LED lights on the shower head glow red when the water gets too hot, and blue when too cold. Bedroom shades can go up and down with a swipe on a smartphone screen. And kitchen appliances, like the dishwasher and range, can be controlled remotely, too.

And then there is that camera-equipped Samsung Family Hub fridge, which uses an app to relay images of the interior to the resident. The refrigerator, which retails for around $3,000, also has a large touch-screen on a door that can be used to order groceries online, watch television, or scribble memos and draw pictures.

For all the connectivity in the reimagined prewar apartment, which Time Equities says is a prototype for subsequent ground-up developments, its price does not seem significantly inflated. The tech-forward unit, No. 3G, is listed at $1.295 million. Meanwhile, an apartment directly downstairs, also renovated but without any obvious “smart” features, was also for sale in early December for $1.25 million.