BEN SMITH: The King of Trump TV thinks you're dumb enough to buy it 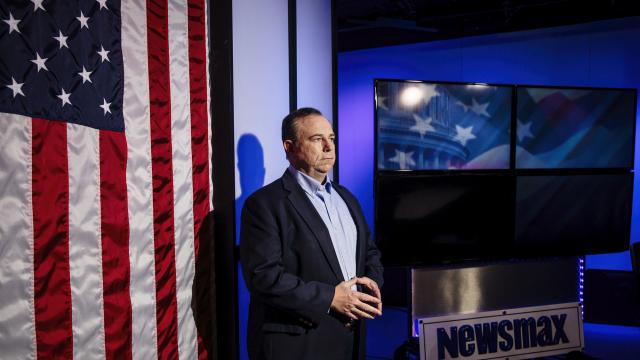 EDITOR'S NOTE: Ben Smith is the media columnist for The New York Times. He was founding editor in chief of BuzzFeed News. Before that, he covered politics for Politico, The New York Daily News, The New York Observer and The New York Sun.

In 2004, Hillary Clinton was in the Senate and Christopher Ruddy had some making up to do. He was, back then, best known as “the Inspector Clouseau” of the Vince Foster case — a New York Post reporter who had popularized the baseless theory that Clinton’s friend, who killed himself in 1993, had been murdered.

But it now seemed possible that Clinton might run for president, and Ruddy laid it on pretty thick. Clinton was doing “a remarkably and surprising good job for NY as Senator,” he wrote to a mutual friend, former Mayor Ed Koch of New York. “I might not like Hillary’s liberalism, but I don’t dislike her on a personal level — as I do Rudy.  Rudy Giuliani is a bad person.”

I asked an amused former Clinton aide to dredge this correspondence out of an old box because Ruddy, a Long Island-born, heavyset 55-year-old, has emerged as the most audacious media entrepreneur of the Trump election fantasy. The chief executive of Newsmax and part of President Donald Trump’s South Florida social circle, Ruddy has capitalized on the anger of Trump’s supporters at Fox News for delivering the unwelcome news, first in Arizona and then nationally, that Trump had lost his reelection campaign. On Newsmax, however, the fight is still on, the imaginary election-altering Kraken is yet to be released, Trump is striving valiantly for four more years and the ratings are incredible.

Newsmax’s prime-time ratings, which averaged 58,000 before Election Day, soared to 1.1 million afterward for its top shows, with one host, Greg Kelly, cheerleading on Twitter and on the air for “the QUEST TO COUNT all the LEGAL VOTES.” The ratings even drew a congratulatory call from Trump himself, my colleagues Michael Grynbaum and John Koblin reported last week.

But Ruddy, as those Clinton messages show, is not the sort of true-believing ideologue his viewers may imagine in the foxhole alongside them. He is, rather, perhaps the purest embodiment of another classic television type, the revenue-minded cynic for whom the substance of programming is just a path to money and power.

All successful TV programmers have some mercenary in them, of course, but even by those standards, Ruddy is extreme. He has turned Newsmax into a pure vehicle for Trumpism, attacking Fox News from the right for including occasional dissenting voices. And when Trumpism turned this month from an electoral strategy into a hallucinatory attempt to overturn the election, Ruddy saw opportunity: Newsmax, available on cable in most American households and streaming online, became the home of alternate reality.

“In this day and age, people want something that tends to affirm their views and opinions,” Ruddy told me in an interview. He wasn’t hard to reach. Like many people who get generally, even inexplicably, friendly media coverage, the genial Ruddy is always willing to talk to the press. He is, in fact, a rare and valuable commodity: someone with real access to Trump who will tell the truth on the record. His insights — 62 quotes in The New York Times in the last four years, 61 in The Washington Post and 51 appearances on CNN — deliver what journalists crave: up-close insights about the president. He has even invited reporters to tag along to Mar-a-Lago as his guest at the president’s private club, which has been a minor irritant for Trump’s staff, two former Trump aides told me.

Not that he’s made any secret of his strategy. The fake crisis of the U.S. electoral system is “great for news,” he told The New Yorker’s Isaac Chotiner last week.

Ruddy is hardly alone in the sudden scramble to convert Trump’s political profile into cash. “There are a lot of well-capitalized people circling,” said Michael Clemente, a former executive at ABC News and Fox News and former chief executive of Newsmax, who has been part of conversations as a potential leader of a new venture. He describes the proposition as a question of math, and the dominance of liberal-leaning cable channels: “Fifty percent of the country has 90% of the news media speaking to them.”

The noisiest effort is led by Hicks Equity Partners, the family business of a Republican National Committee co-chairman and friend of Donald Trump Jr., Thomas Hicks Jr. The Hicks group has sought to lead buyouts of both Newsmax and its smaller and stranger rival, the One America News Network.

The group is also pursuing a third strategy, according to a confidential investment proposal I obtained, which would focus on culture rather than news: building “a family-friendly programming destination of broad appeal based on traditional values” by buying and merging a small “equestrian sports and lifestyle” channel and a larger one, which a person briefed on the talks identified as the small, independent Ride-TV and Great American Country, which is owned by the cable behemoth Discovery. (A spokesman for Hicks Equity Partners didn’t respond to an inquiry about a potential deal.)

Other possibilities for the president to cash in on his stature include creating a new Trump TV network from scratch, either as a television broadcast channel, a package of online video or even a way to direct cash into the Trump family political operation. 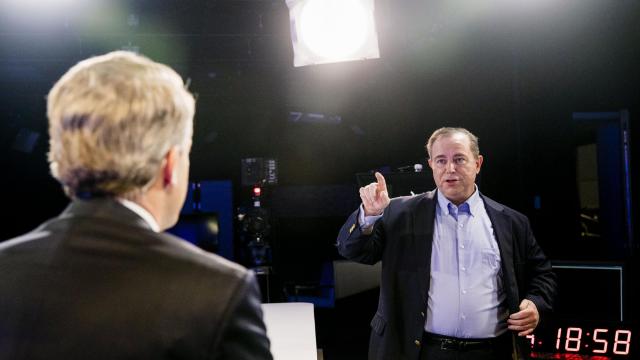 Ruddy has a head start. His main commercial advantage is the network’s distribution, which the company says puts it in 70 million of the roughly 90 million American homes that have cable, thanks to deals with the largest distributors, Comcast and AT&T. It’s a laborious, and expensive, process to get onto the cable package — even if you are, as Newsmax currently is, way up the dial. The programming is also available through a livestream on its app and on a range of newer “over-the-top” TV platforms like Roku. (OAN claims to be available in about half as many cable homes.)

The process of establishing a cable network is also deeply political, as things often are in monopolistic industries: Newsmax was dropped from AT&T’s DirectTV in 2016, and restored the next year after Sen. Charles Grassley called the move “unfair” during hearings about AT&T’s attempt to acquire Time Warner. You could imagine executives at Comcast and AT&T taking their time to make a deal with Trump TV.

But Ruddy also has a problem. His TV business, a speculative bet that could be worth billions if it can cut deeply into Fox’s audience, currently loses money. The company invested $70 million from 2014 to 2017, according to a confidential overview produced for potential investors in 2018 that one of them shared with me. And Ruddy told me Newsmax is still investing. Those costs are partly because new channels often pay cable companies to get on TV. Ruddy declined to describe his specific arrangements with the cable providers, but said, “It’s not unusual for companies to do that when they start out.” And it’s partly because big advertisers have fled right-wing talk shows, leaving even the widely viewed prime-time shows on Fox News with less lucrative “direct response” ads for pillows and medical devices.

Newsmax has inverted the usual media business dynamic. The company is losing money on television, and making it on the internet, though Ruddy told me he expects that “revenues on cable and OTT television will be more robust and consistent than the online business for the next 10 years.”

Newsmax has built a solid, and unusual, business by catering to the 50-and-older demographic it described in the document shared with investors as “Boomers and Beyond.” The website’s voice, its big and lucrative email lists, and its products, from books to magazines to vitamin supplements, have the tone of conservative direct mail. And it’s working: The company projected its 2018 revenues at more than $59 million, divided among advertising, subscriptions and e-commerce. (One sponsor on the app last week was selling health advice, asking “Is the ‘Pandemic’ a Lie?”)

Newsmax has been raising money to finance its TV ambitions. Private equity from “a couple of investors,” Ruddy said, has paid to upgrade studios and hire figures like Kelly and the former White House press secretary Sean Spicer as the hosts of shows that replaced hours of World War II documentaries, and carry conservative radio talkers including Howie Carr from Boston.

The investors, he said, are domestic, despite a Politico report (picked up on Breitbart) indicating he was in talks to raise money from Qatar. Ruddy said he sent proposals to many sovereign wealth funds, among others, but has not taken foreign investment. He blames his former rival, Steve Bannon, for pushing the Qatar story, but such grudges are fleeting in the often-shifting alliances of the new right: Bannon’s podcast, “War Room,” is now also broadcast on Newsmax late at night on weekdays.

Newsmax now needs to raise more money, or sell fast, if it’s going to keep upgrading its talent and production quality to press its advantage with Fox News — which has begun nervously trying to block guests from appearing on the network.

When I pressed Ruddy on why he was stringing along his audience with a story he can’t, really, himself believe — that Trump won the election — he didn’t really defend it. Instead, he countered that he wasn’t the only one. “For two years, the liberal media pushed this Russian hoax theory, and there didn’t seem to be any substantiation at the end of the day and it was a pretty compelling, gripping story — controversial personalities, things happened, sparks were flying,” he said.

Newsmax continues to tell a gripping story. On Friday night, Kelly referred to Joe Biden’s “alleged victory,” hosted a long interview with Rudy Giuliani and later turned to an analyst who gave Trump a “35 to 40% chance that he wins this.” The 8 p.m. host, Grant Stinchfield, announced that “the momentum seems to be shifting back to the president’s favor,” and interviewed a lawyer for Trump, Jenna Ellis, and a Pennsylvania state senator trying to take back the state’s election certification.

Ruddy’s cynicism brings me back to the most trenchant attack from conservative media on the mainstream media: that journalists think conservatives are stupid. Tucker Carlson regularly tells his audience that the college-educated snobs in New York who preside over the major outlets view conservatives as unsophisticated rubes, misled by misinformation, not as people who actually believe in the ideas pushed by Trump, like immigration should be sharply curtailed. Those attacks on the media are often false, but the coastal media sometimes does fail to understand people who aren’t like them, left and right, and sometimes they patronize their audiences.

But nobody I’ve ever covered treats an audience with the blithe disdain of Ruddy. He has them watching a great story — a thriller, a whodunit — about a stolen election. He thinks they’re stupid enough to fall for it, dumb enough to keep watching even after the fantasy inevitably dissolves, buying the supplements and the books and, crucially, tuning in to channel 1115 in large enough numbers that, eventually, the cable companies will pay him.

Perhaps he actually thinks his viewers are that dumb. Or maybe he just needs them to stick around long enough for him to find someone just as cynical, but with more cash on hand, to buy him out.