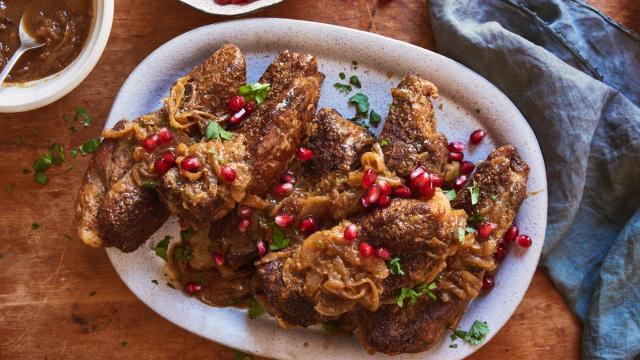 When it comes to pork, most home cooks know the chop, the tenderloin, the loin roast, even the Boston butt. But because I am a sucker for the underdog and the oddball, I have a new favorite cut of pork: the country-style rib.

Why oddball? First, it suffers from something of an identity crisis, since despite its name it’s not really a rib. Second, it has an indeterminate composition, consisting of both light and dark meat. Finally, it has a tendency to slide into disreputable territory, since its name is sometimes appropriated for less desirable cuts.

But like any good anti-hero, the country-style rib has hidden virtues. It has rich, deep pork flavor; it is generally the most inexpensive cut of pork at the meat counter; and it is ideal for those slow-cooked dishes we crave in cool weather.

To understand this cut, you first need to know the blade pork chop. This chop is cut from the two ribs at the shoulder end of the pork loin. Because it comes from the intersection of the tender loin and the more fat-laden and gnarly shoulder, it has qualities of both.

Butchers used to have difficulty selling this chop, because it didn’t look as lean and smooth as those from the center of the loin. So it generally ended up as an ingredient in sausages or, less reputably, secreted at the bottom of a wrapped package of “loin chops.”

Then sometime back in the late 1960s or early ‘70s, a Chicago-area butcher, Cliff Bowes, came up with the idea of taking advantage of the popularity of ribs by fashioning these lowly chops into strips that resembled ribs. To do so, he butterflied the chops and cut through the ribs.

You can recognize these traditional country-style ribs by the slender section of rib that curves prettily along the bottom. I asked butchers in New York and Boston to cut me country-style ribs, and both did it this way.

In a world in which everyone used the same words to mean the same thing, that would be the end of the story. But the approach of butchers tends to be more like that of Humpty Dumpty, who said in “Through the Looking-Glass,” “When I use a word, it means just what I choose it to mean.” So it’s not surprising that three other cuts are often marketed under this name.

Sometimes instead of a curving rib bone, you’ll find a flat little 2- or 3-inch section of bone lurking along one edge of your country-style ribs. This means the chop was cut from the section of the shoulder just adjacent to the ribs; the bone is a piece of the scapula. But this is really not a big deal. Ribs fabricated in this fashion will have somewhat more fat and connective tissue and more dark meat, but are still close cousins of the more traditional cut and cook up the same way.

That’s not the end of it, though. Some butchers will cut the lower part of the pork shoulder into strips and label them “boneless country-style ribs.” They are still tasty and work well in long-cooking recipes, but you have to pay closer attention to what you’re getting and avoid those with excess amounts of fat and gnarl.

Then there’s the higher-class impostor. Sometimes boneless rib-eye chops are fashioned into long, slender pieces and called country-style ribs. You can tell them clearly from their much lighter color and higher price — usually twice as expensive as the real thing. But since this portion of the pig is much leaner and therefore cooks differently, we’ll bypass these ersatz ribs for now.

Any of the other versions, though, will work just fine, particularly in stews and braises.

In addition to its proportion of lean meat to fat and collagen, the country-style rib also has a shape that makes it ideal for stews. It’s hard to find precut pork stew meat in the supermarket, and even if you do, it’s not a good idea to buy it, since it usually consists of ragged little odds and ends from around the pig.

So the usual drill is to buy a Boston butt and butcher it, which is a considerable amount of work. Country-style ribs, on the other hand, have considerably less fat and gnarl than the butt and come in neat pieces that are easily sliced up.

In a similar way, country-style ribs brown quickly and fit neatly into a Dutch oven for long, slow braising.

I don’t often go for presalting meat because I rarely think far enough ahead to do it. But these ribs do benefit from the process, which somehow evens out the cooking times of the darker and lighter sections, so I recommend it.

If you forget it, though, forge ahead. The results will still be delicious.

1. Dry the ribs well, sprinkle all over with salt and allow to sit, refrigerated, for 1 to 2 1/2 hours. Move oven rack to middle position and heat oven to 325 degrees.

2. In a small bowl, combine cumin, coriander, chipotle pepper, black pepper, cayenne and cinnamon, and mix well. Dry the ribs well again and rub this mixture onto one side and the edges of the ribs, pressing to make sure it adheres. Heat oil over medium-high heat in a Dutch oven or other large, heavy pot until shimmering. In two batches, place the ribs in the pot, with the spice-rubbed side up, and brown the opposite side well, about 5 to 8 minutes. Remove to a platter as browned.

4. Move oven rack to middle position and heat oven to 325 degrees. Return ribs to the pot and add the orange juice, lime juice and enough beer so that the liquid comes halfway up the sides of the ribs. Bring to a simmer, then cover, put in the oven, and cook until the ribs are very tender, about 1 hour and 15 minutes. Remove the ribs from the pan, cover loosely with foil, and set aside. Continue to reduce the liquid if it is too thin, then adjust seasoning.

5. Top each rib with several tablespoons of sauce, sprinkle with cilantro and pomegranate seeds, if using, and serve.

2 large or 3 small sweet potatoes, peeled and cubed (about 4 cups of cubes)

3 pears of your choice, peeled, cored and diced

1. If using bone-in ribs, cut away the bones and set aside. Cut pork into 1-inch cubes, sprinkle the ribs evenly with the salt and allow to stand, refrigerated, for at least 1 hour and no more than 12 hours. Move oven rack to middle position and heat oven to 325 degrees.

2. Dry pork cubes well and sprinkle generously with pepper. Heat oil over medium-high heat in Dutch oven or other large, heavy pot until shimmering. Working in batches to avoid crowding, brown the pork well (including bones if you have them), transferring to a platter as browned.

3. Add the onions and fennel to the pot and cook, stirring frequently, until onions are transparent, 7 to 10 minutes. Add the wine and bring to a simmer, stirring to dissolve any fond on the bottom of the pot. Add the pork (and bones if you have them), sweet potatoes, caraway seeds, allspice, bay leaves and enough chicken stock to just cover the meat. Bring to a simmer, cover and place in oven for 1 hour. Add the pears to the pot, then continue to cook until meat is very tender, about 30 to 45 minutes more.

4. Remove bones from pot, stir in lemon juice, then serve stew in bowls, passing mustard separately so people can put a dollop on their stew if desired.