The key to finding a dream home on the coast? Working with the right agent 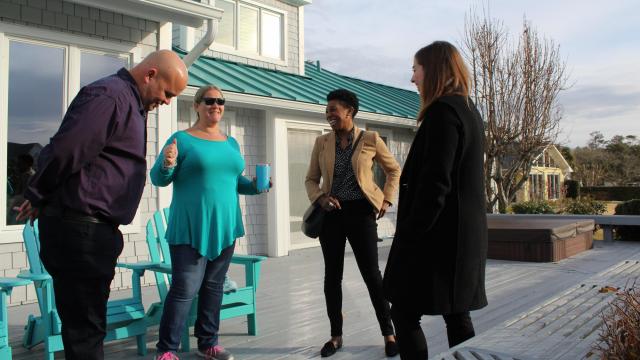 Anne Yager has been going to the coast since childhood. Although her home was — and still is — in Raleigh, her father purchased a place in Morehead City when she was young, so trips to the beach were a regular affair.

Now, with a family of her own, Anne and her husband, Steven, wanted to be able to provide their children with similar seaside experiences in their youth.

For many beach buyers who don't live on the coast full-time like the Yagers, the long-distance buying process can be understandably complicated. Local real estate agents can help bridge that gap.

For the Yagers, working with Linda Rike Real Estate has been a generational affair.

"I actually don't remember Linda Rike's office ever not being in Morehead City," Anne said. "Linda worked with my dad in the past, and then we recently worked with her daughter. It's been a great relationship for us both ways."

"Kelinda was a true pleasure to work with from the moment we engaged her," Steve added. "One of the great things you want from the professional you work with is for them to challenge you in a way that forces you to make sure you really know what you're looking for. Kelinda was willing to take us all around Carteret County and show us what was available in our price range. What we ended up acquiring was actually less than we budgeted for, and we got more than we thought we could."

"We were actually able to meet and talk to the builder. She's so tied into the community, she knew how to get in touch," Steve added. "We were able to make some minor changes on the house we wanted, and that made all the difference. Her knowledge of the area and her relationships in the area helped immensely throughout the process."

Since Anne and Steve were familiar with the coast, they had a better idea of what their locational priorities were. But not all Crystal Coast buyers have that same level of familiarity.

Hailing from the Jersey Shore, Marie Carlucci and her husband had never been to the North Carolina coast, but after a little online research, found that it was the perfect location for them, thanks in large part to the moderate weather and low property taxes.

After initially searching in Wilmington and not liking the congested feeling of the city, they decided to search a little further up the coast.

"Believe it or not, we took a map of the state of North Carolina — and we wanted to be on the coast — so I just pointed to Beaufort and said, 'Hey, that seems like a good place to start,'" Carlucci laughed. "I searched for North Carolina real estate agents online and Wyatt Rike popped up. So I called him, and the rest is history."

Carlucci and her husband came into the area knowing virtually nothing and still living in New Jersey, which added another layer of difficulty to the search process. After telling Wyatt about their price range and ideal amenities, he went to work searching through listings in the area, eventually landing on a subdivision that the Carluccis fell in love with. Unfortunately, the home they set their sights on was unexpectedly taken off the market, so they made the trek back up to Jersey, feeling dejected at the thought of starting the search process all over again.

Shortly after returning to Jersey, the Carluccis got a call from Wyatt, letting them know that a home in that same subdivision had just come on the market. If they could make it back down to North Carolina as soon as possible, he could set them up with a showing. The Carluccis made it work, and ended up buying the house, and forging a long-lasting friendship with Wyatt in the process.

"We hit it off from the get-go, and we've remained friends still, four years after we purchased the house. Actually, my husband and I were just married down here two years ago — we had just a small little service on the beach down here — and Wyatt stood up for us when we got married. I guess you could say he was the best man," Carlucci laughed. "I like to joke around and have a good time, and that's how Wyatt is. He made us feel comfortable right away, but he also handled it all very professionally."

For both couples, there have been no regrets about their decision to purchase these coastal escapes.

"When we go back to Jersey, it's a quick pace. Everybody's hustling and bustling, everybody's on a time schedule — it's crazy. When I come back here, it takes me three days to unwind, because it's so different, which I love," Carlucci said. "In Jersey, if you're sitting at a traffic light and it turns green, you get honked at if you don't hit the gas within a second. Here, I've seen people wait like 15, 20 seconds. It's good for your blood pressure. If you have high blood pressure, move down here, because the pace is so much slower."

Since closing in June of last year, Steve and Anne spent every single weekend visiting the beach up until the start of the winter season, although they've still made trips a number of times since then. Now, they're already getting ready to gear up and head back down, with a new boat in tow.

"There's something about the water; about getting away from everything and being able to look and watch the sunset and sunrise. The wildlife down there is also amazing. We have dolphins, herons and wild horses come through," Anne said. "I feel like we're in a really good place, and it's only three hours for us door-to-door."

Steve added, "Something we had hoped for but didn't know if we were going to get is this great community where we live. When you have a vacation home that you can also experience some community while you're there, we really lucked out in the one we ended up finding."