The Hunt for ‘Fire Cats’ Amid Northern California Ashes 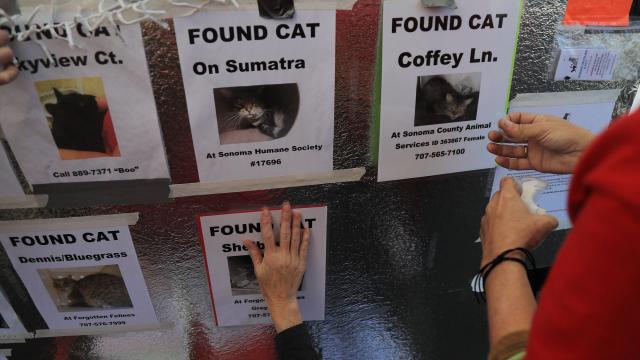 SANTA ROSA, Calif. — When a firestorm swept down the hillsides of Sonoma County, bringing terror to this tight grid of thousands of homes, dogs tended to rush to their masters.

But cats went in the opposite direction, ignoring the pleas of panicked owners and disappearing amid the chaotic evacuation.

Finding the missing cats that fled the October wildfires has been an impassioned quest for Jennifer Petruska, an animal lover whose home, pets included, was one of the few in her neighborhood to be spared.

Petruska has spent nearly every night since the fires tracking and trapping fire cats, as she calls them, the felines that for weeks have remained missing because of stubbornness, trauma, instinct, or a mix of all three.

Catching cats can be tricky in the best of circumstances, but she and her team of volunteers have caught more than 70. They believe many dozens more are on the loose.

Pet Rescue & Reunification, as the volunteers call themselves, have set up night-vision cameras in storm drains and creek beds, where many cats went into hiding. Every evening at dusk they set traps baited with tuna and mackerel, checking them hourly until dawn.

“If you want to catch a cat you have to stay up all night — that’s just the name of the game,” Petruska said as she prepared for another dark and cold round of cat stalking. “I’ve been a horrible insomniac my whole life so it suits me.”

Coffey Park, the neighborhood where Petruska is focusing her efforts, may as well have been struck by a bomb. Well over 1,000 homes were leveled. Petruska and her team say they realize that with nearly 5,000 homes destroyed in the Santa Rosa area alone their effort is ancillary to the grieving and massive effort of reconstruction that is only just beginning.

The bleak landscape of charred lots is still teeming with creatures stealthily crawling throughout the night, mostly unseen.

Petruska says she knows there are still many cats on the loose because her motion-activated cameras capture them nearly every night, along with a parade of other nocturnal animals such as skunks, opossums and raccoons.

To the families who lost everything, recounting how Petruska helped recover their cats often brings tears.

“I just wanted my cat — that was the only thing I wanted back,” said Kelly Stinson, whose home in Coffey Park was destroyed. “I spent hours every single day looking for her.”

Petruska located Evy and after an evening of coaxing returned a day later and grabbed the cat by the scruff of the neck.

Sara Ratekin, a veterinarian who has treated many of the cats rescued by Petruska’s team, says the fires have shown the ability of cats to survive perilous circumstances. Captured fire cats often arrive in her office with burned paws, singed whiskers — and many pounds lighter than before the fire.

Unlike dogs, cats have an instinct to flee when they sense danger, Ratekin said.

“I can explain why they ran away,” she said. “But I can’t explain why they became so wild so quickly.” In August, during the flooding in Houston caused by Hurricane Harvey, cats were spotted by rescue workers swimming or floating on furniture and debris trying to find high ground.

When emergency medical workers showed up at flooded homes, dogs would often greet them at the door, tails wagging, said Katie Jarl, Texas director of The Humane Society of the United States.

If cats were still home they would often be hiding — and when discovered would need significant coaxing to leave.

“No matter if it’s fires or flooding, or any type of natural disaster, cats will often hide,” Jarl said. “It can be days or weeks before they re-emerge.”

To lure Santa Rosa’s fire cats back into domestic life, Petruska assembles personality profiles of each cat she stalks. One cat likes the sound of whipped cream fizzing from a can. She carries a can in her car. Another cat answers to the sound of the crinkling of a bag of a specific brand of cat treats. She carries the treats.

Unsurprisingly the most effective lure appears to be fish. Petruska soaks socks in the juices from cans of mackerel and hangs them from trees.

On a recent evening at dusk, she drove through the countless rows of burned out houses to a neighborhood near a small creek. In near freezing temperatures, she hauled a cat trap across the molten remains of a home, careful to step over pieces of roofing and other remnants jutting up through the rubble. She passed a random assortment of household items laid bare in the detritus — a solitary teacup, a blackened metal colander and the burned out remains of a washer and dryer — before setting up a metal trap.

By morning the trap was still empty. But she has persisted, working through the holidays.

Around 10 fire cats have been found without any clues as to their owners; they are being kept at Sonoma County’s animal services department.

She has found cats even after owners gave up the search. Cindy Fulwider fled her home in the early hours of Oct. 9 as embers the size of golf balls rained down. She was convinced that her cat, whom she calls Sweet Baby, had perished. Then she got a call five weeks after the fire from one of Petruska’s team.

“I really thought we would never see him again,” Fulwider said.