The Hospital Gown Gets a Modest Makeover 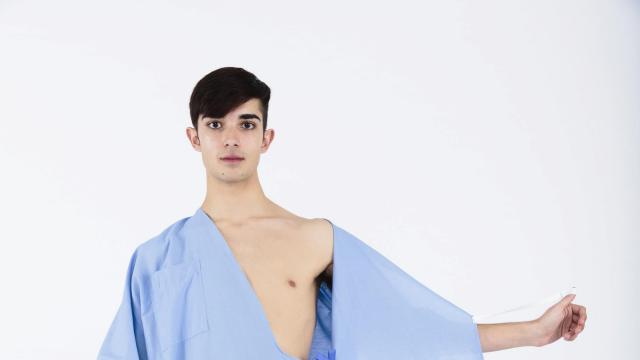 As 2018 dawns and with it the new tax plan, the future of health care for many individuals remains uncertain. But there is at least one type of improvement in coverage Americans can look forward to: the end of the dreaded exposed rear end, that hospital cliché created by back-tying gowns that has been immortalized in movies including “Something’s Gotta Give” (courtesy of a medicated Jack Nicholson stumbling down the hallway) to “Yes Man” (Jim Carrey this time, spotted on the back of a motorcycle). The fashion world has woken up to a new dressing opportunity.

In partnership with students from Parsons School of Design, Care and Wear, a “healthwear company” (it specializes in medical wearables), has created a new kimono-inspired hospital gown that opens in the front, has a shielding pleat in the back, replaces five types of gowns with one, and allows for partial exposure through the use of ties and snaps.

This month MedStar, a 10-hospital nonprofit health care system, has begun testing the gown at one of its smaller community hospitals, the Montgomery Medical Center in Olney, Maryland. If the trial run is successful, MedStar will use the gown in its other locations.

Given that in 2017, between inpatient admissions, observation stays and emergency-room visits, MedStar had about 678,000 patients who needed gowns, that’s a big potential audience for a new look. (The gown will also be available on the Care and Wear website, for $45, starting Wednesday.)

“The current patient gown, with the ties in the back, reinforces a power imbalance between patients and caregivers,” said Dr. Mark Smith, chief innovation officer of MedStar Health and director of the MedStar Institute for Innovation. “Patients get stripped of their sense of personhood, of their privacy.”

Though fashion has occasionally flirted with designing for the health care market, previous initiatives have been limited and far between. Cynthia Rowley designed a series of hospital outfits for patients at Hackensack University Medical Center in New Jersey in 1999, and Diane von Furstenberg helped dream up a gown in a special pattern for Cleveland Clinic in 2010. Annie and Isabel, Gownies and Dear Johnnies offer lines of simple, patterned hospital gowns for individuals to purchase, for $20 to $75. However, the hospital-wear has never been a focus of fashion education before, or treated as a plausible career path.

“It’s a large market that no one knows about,” said Chaitenya Razdan, a co-founder and chief executive of Care and Wear. Nationally, about 140 million people visited emergency rooms in 2014, according to the Centers for Disease Control. According to Razdan, the number of gowns hospitals typically require is four to five times the number of patients who will use them. That’s a lot of gowns. “If we want to make meaningful change, it’s critical that we partner with companies where we actually put products into the world that have longevity and impact, and we get a sense of how we can measure our social impact,” said Brendan McCarthy, an assistant professor and program director of the Systems and Materiality pathway at Parsons, whose students helped design the gown. The purpose of the pathway is to expose students to all of the interrelated parts of fashion design, including the sourcing of materials, labor, production practices, waste management and recycling.

The light blue gown MedStar is testing features ties on both sides of the body, one inside and one outside; wide sleeves with plastic snaps that allow the upper arms to be easily exposed when, for example, an IV is needed; a front pocket with a slit for devices that monitor vital signs; side pockets for personal items; and a specially designed pleat in the back to address the aforementioned backside problem. It is made out of a cotton and polyester blend that Rachel Sax Ramos, the head of product at Care and Wear, described as a “hospital chambray” and that can stand up to multiple rounds of laundering.

Irene Lu, a student from Parsons who worked on the gown, said that a challenge the entire class struggled with was how to make a gown that would give clinicians easy access but also allow for modesty. “With the original gown, there’s a reason the back is so open,” Lu said. The students’ solutions — the box pleat and the plastic snaps — impressed Smith.

“With the snaps, you take it down and half of their chest is exposed,” Smith said. “You can examine the front of a patient without having to cover them up additionally. It gives you terrific access, and the patient feels safe and protected and comfortable.”

The box pleat in back “operates like a giant skirt slit that you can open up to have full access, but if you’re walking around or waiting in the ER, you’re not hanging out, which was everybody’s biggest pain point,” Sax Ramos said. The gown comes in small, medium, large and bariatric, denoted by swatches of fabric in different colors stitched into the collar. “It’s really up to my generation of designers to look forward and figure out how to change the system of fashion, and make it more sustainable,” Lu said. “I want to focus on creating innovative articles of clothing that really help people with real-life issues rather than constantly putting out collection after collection, season after season. Do we really want to put our resources, time and energy into cycles like that?”