The Heartbreakers at Chain Restaurants 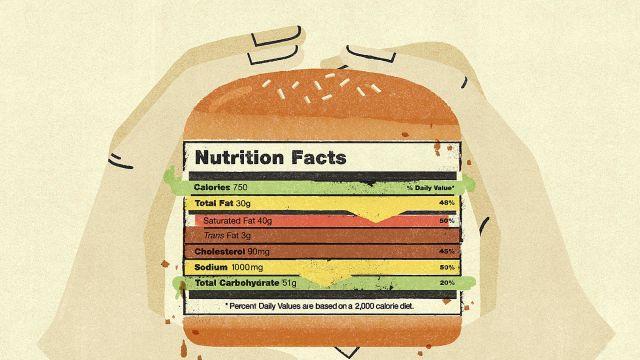 Who is to blame for fattening up Americans and killing their hearts? McDonald’s, it seems, is not even in the running. In fact, when you compare the fare under the Golden Arches with many of the dishes served at chain restaurants around the country, a Big Mac with large fries and a soda begins to sound like health food.

Hungry for a hearty breakfast? You could — if you dare to test the resilience of your heart — try the Cheesecake Factory’s Breakfast Burrito: “warm tortilla filled with scrambled eggs, bacon, chicken chorizo, cheese, crispy potatoes, avocado, peppers and onions, over spicy ranchero sauce.” Nutritional information: 2,730 calories (more than a day’s worth, so I hope you’ll skip lunch and dinner), 4,630 milligrams of sodium (two days’ worth) and 73 grams of saturated fat (more than three days’ worth).

You’d have to eat seven Sausage McMuffins from McDonald’s to equal the cardiovascular and waistline damage done by one burrito, according to the latest Xtreme Eating Awards bestowed by the Nutrition Action Healthletter, published by the nonprofit advocacy group Center for Science in the Public Interest, in Washington.

Perhaps you’re a breakfast skipper and would rather dig into a super-hearty lunch like the Cheesecake Factory’s newest version of pizza: “Chopped chicken breast coated with breadcrumbs, covered with marinara sauce and lots of melted cheese,” and get this, “topped with angel hair pasta in an Alfredo cream sauce.” It adds up to 1,870 calories, 55 grams of saturated fat and 3,080 milligrams of sodium. That’s like eating four pieces of Popeyes fried chicken and four biscuits, Nutrition Action calculated.

I suspect, though, that Red Lobster’s Create Your Own Combination shrimp meal is the all-time Xtreme Eating winner, an award bestowed on it in 2015. It delivers a whopping 2,710 calories and 6,530 milligrams of sodium; for that amount you could down a KFC meal of an entire eight-piece bucket of fried chicken, four side orders of mashed potatoes with gravy, four pieces of corn on the cob and eight packets of buttery spread.

For comparison’s sake, you might keep in mind that 2,000 calories is what the average person should be eating for an entire day including snacks, not just at a single meal.

But there’s some good news lurking behind all those extra calories and artery-damaging nutrients. After long delays, as of last May chain restaurants with 20 or more outlets must post calories on menus and menu boards for all their offerings, a regulation in the Affordable Care Act of 2010. (A number of big chains, including Panera Bread and Au Bon Pain, did not wait to be required to post calories, and in 2012 McDonald’s became the first fast-food company to do so.)

Although I once heard a Starbucks customer complain “Do I really have to know the calories in my Frappuccino?” there’s a better chance that, as a result of the menu listings, 1) diners who care will have an easier time and a greater incentive to choose lighter fare, and 2) restaurants may start competing to offer lower-calorie options of similar dishes.

A McDonald’s customer trying to decide between a Big Mac and a Double Quarter Pounder with cheese might be swayed by the fact that the Big Mac has 200 fewer calories. But diners faced with the seemingly healthier choice of the Southwest Salad with Crispy Chicken might be more tempted by the Double Cheeseburger, which has 10 fewer calories than the salad.

In New York City, menu calorie postings have been required since 2008, and a study by the Stanford Graduate School of Business found that Starbucks customers ordered food with 6 percent fewer calories, on average, as a result. This may not sound like much, but over time such small changes add up; this country’s obesity epidemic can be explained by a mere 100 extra calories a day for each person.

Furthermore, after the negative publicity received from previous Xtreme Eating Awards, several chain restaurants were prompted to make meaningful calorie reductions in the notoriously featured dishes. The changes most likely had little or no deleterious effect on the dishes’ flavor, texture or popularity but may have resulted in belt-tightening for some steady customers and possibly even saved a heart or two.

Here, for example, are some caloric reductions made in earlier winners of Xtreme Eating Awards, starting with the first year of the awards, 2007.

And the California Pizza Kitchen has proved that even America’s favorite pie can handle a hit. Its Tostada Pizza, which had dished up 1,440 calories in 2010, is now at 1,140.

Why, you may wonder, is this so important? There are at least three good reasons:

1) A third or more of the calories Americans now consume come from foods eaten in or purchased from restaurants, and most people are clueless as to how many calories they are consuming as a result.

2) Menu titles and even descriptions can be very misleading. You might think the original version of the Ruby Tuesday dish made with white meat chicken and fresh steamed broccoli was heart-healthy and low in calories without realizing what the added cheese and cream did to the calorie count.

3) The obesity crisis has now reached epidemic proportions and is showing no signs of abating in Americans older than 5. The more often people are forced to confront the reality of what they are putting in their bodies, the more likely they will be make healthier choices, in turn prompting recipe changes to better suit consumer demand.