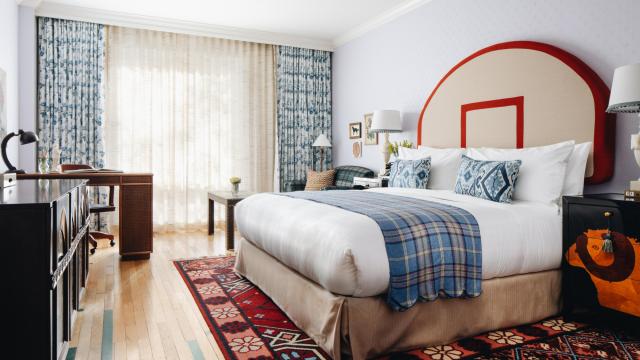 The Franklin Hotel in Chapel Hill on Franklin Street has a new name, a new look and new ownership as the Graduate Chapel Hill. What hasn't changed is the hotel's Tar Heel pride and commitment to its patrons.

The Franklin Hotel was bought in 2019 by Graduate Hotels, a company based out of Chicago that builds hotels in "university anchor towns" across the country that reflect the nearby colleges.

"Graduate Hotels had been scouting this Chapel Hill location on Franklin Street for a while. Graduate's CEO Ben Weprin noted a gap in the hospitality market in college towns on the hotel side and thought it would make sense to create a brand that was dedicated to elevating the uniqueness of American college towns," said Wes Rowe, general manager of the Graduate Chapel Hill. "After they purchased the property last year we've been in a transitional phase doing renovations and finally opened on August 4."

Rowe noted the importance of the Graduate being located in the "throws of the action" on the iconic Franklin Street to capitalize on the school spirit that comes along with proximity to campus. It's not uncommon to see students, alumni, or their families strolling down Franklin Street on any given day. Franklin is also famous for things like its Halloween celebrations and is the place students "rush" whenever the University of North Carolina C wins a national title.

As it says on its website, the Graduate Chapel Hill is "tailor-made for Tar Heels."

Now open and ready for business, the hotel features plenty of UNC-Chapel Hill memorabilia and Carolina Blue decor. In fact, the front desk in the lobby is a real scoreboard that displays the winning score from the 1982 NCAA championship game.

"With Graduate's brand, they really focus on design and really curate each property for that town that they're in — the university town," said Rowe.

As the hotel describes on its website, "Guest rooms are dressed in shades of Carolina Blue, with touches of Greek Revival and nods to the region's natural beauty. Discover elements honoring campus icons and notable Tar Heels, including the Old Well, Mia Hamm and His Airness, #23."

One of the hotel's most unique and celebrated draws is a replica room of Michael Jordan's 1983 Granville Towers dorm room, which was featured in a Sports Illustrated photo shoot of the same year. The NBA all-star attended UNC and played for Dean Smith from 1981 to 1984.

"The room is an identical replica," Weprin told ESPN. "From the ceiling, to the brick wall, to the record player and records, the posters, the pennants — every single piece in that room, we have it."

The replica room, fittingly number 23, is like taking a step back in time. From the cinder block walls and the posters hanging up, to the extra-long double beds, the room is a carbon copy — right down to the record player and records Jordan was listening to at the time. Jordan's Gucci umbrella even makes an appearance.

For the time being, the replica room is for visitation only, but in the future, there are plans to allow guests to book it for stays depending on demand.

"This room was our CEO's love letter to Michael Jordan who has meant so much to Chapel Hill, North Carolina, and the game of basketball itself. Even if you're a pop culture person — Jordan created so many trends," said Rowe, noting his Air Jordan sneaker line. "Our CEO thought this was a great opportunity for us to pay tribute to him. It shows that everyone has humble beginnings and a lot of us start off in these dorm rooms, but we have all this potential. It represents hard work and commitment to your calling. Michael Jordan is a prime example of what can be accomplished."

According to the Chapelboro news, "The hotel offers many other relics of UNC basketball history — including game-worn sneakers from 1983, a $5 check Jordan cashed after winning a game of pool and Jordan's actual student ID card."

Besides its 70 guest rooms, other features of the hotel include a restaurant and cocktail bar (food and drink services will not be available until later this fall due to COVID-19), 2,400+ square feet of indoor and outdoor meeting and event space that can accommodate up to 175 guests, a 24-hour fitness center with Peloton bikes to boot, and a "basketball court" on the third-floor atrium.

"It's a carpeted basketball court and we have these really cool plush basketballs that you can actually shoot," said Rowe. "If you ever want to get out of your room and just go work on your jump shot, it's a good spot to do that or take a conference call and pace around."

Rowe admitted opening a hotel during a pandemic isn't ideal, but they're doing their best to make staff and patrons feel safe (temperatures of staff are taken daily, face masks are being worn, cleaning and sanitation is taking place regularly, etc.), and are even offering discounted day rates until October 2020 for people who don't want to stay the night or just need a change of scenery.

"We're trying to create some different opportunities for guests to come in and enjoy the space, even if they don't feel necessarily comfortable about staying overnight anywhere just yet," said Rowe. "Just because the building has changed, a lot of the people haven't. I've been here at this property for just over seven years. So many members of our staff have been with the property and with Chapel Hill for many years now. We just want people to know that we always like to create opportunities for people to have fun and now we really have a building that allows our guests to do that."