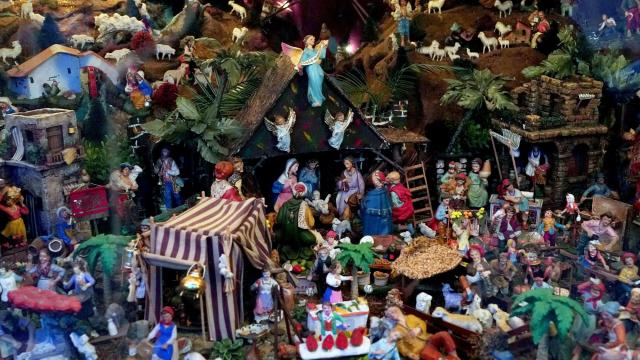 NEW YORK — It was the Sunday after Thanksgiving, and Joseph Sciorra was ready to build his presepio in his apartment in Williamsburg, Brooklyn. A plastic foam base was in place on a small table in the corner of the kitchen. There were plastic containers and tape and nails and dried bunches of herbs to serve as vegetation.

This year, his presepio — an elaborate Nativity and village scene traditionally built by Italians during Christmastime — would contain a pond, a stream and a waterfall for the first time. But just as he was starting to build, disaster struck. His pump broke.

These tiny pumps, crucial for the waterfall, are an integral part of dozens of homemade presepi in New York City. The presepio, which originated during the 13th century in Rome, is to Italians what the Christmas tree is to Germans and Santa is to Americans.

New Yorkers might be familiar with the presepio under the Christmas tree at the Metropolitan Museum of Art, a classical Neapolitan Baroque crèche. But to see the authentic, paisan versions Italian immigrants brought with them, you need to venture to neighborhoods like Ozone Park in Queens or Carroll Gardens in Brooklyn.

“Everybody has a different method how they do it,” Sciorra, 63, said. “There’s a funky soulfulness to the ones built here in New York City. They’re all very personalized.”

Sciorra — director of cultural programming at the Calandra Institute at CUNY who has written about presepi in his book, “Built With Faith” — met with several maestri of the folk art tradition this fall to get tips on how to integrate water into his mountain landscape.

In Ozone Park, Harris Taormina, who has built presepi for 55 years, made the basin for his pond out of an aluminum pan “to get the curves.” The presepio sits in his garage behind a window for the neighborhood to enjoy. Each winter, he goes through four or five gallons of blue antifreeze to keep the water flowing in cold weather.

The water runs through an incredibly detailed village with hundreds of figures and farm animals. The daily life of Italians — the woman scrubbing clothes in the stream, the man selling sausages, the shoemaker, the potter, the Sicilian cart drivers — are all mixed in with the holy family, the three kings, Herod and a line of Roman soldiers.

Taormina, 79, a retired stockbroker, built his first presepio under the family Christmas tree in Queens when he was a boy, alongside his father. His wife’s family also built presepi when she was growing up in Italy.

“I remember my brothers going to the woods to find the holly and the moss,” said his wife, Gilda Castiello. Her father and grandfather passed down their antique figures to Taormina, which he now incorporates into a second presepio he makes to go underneath the tree — like the one he and his father used to build.

Neighbors and passers-by stop to gaze at the garage presepio, which is lit up throughout the season. “There used to be a lot of Italians around here,” Taormina said. “But now the Muslims come to see it and the Chinese and the Polish people. They all love it. There’s only one God.”

Back in Brooklyn, 74-year-old John Miniero uses cork to build his own rugged landscape, houses and waterways in his presepio, which sits in a hand-built display outside his home in Dyker Heights. He doesn’t use antifreeze; he says it clogs the pump.

Miniero, who lived on the Italian coast in Sorrento until he was 12, watched his father build the family presepio with fig branches and papier-mâché. Twenty years ago, Mineiro started building his own in his Dyker Heights bakery, but when he retired, he put it outside his house and covered it in plexiglass. Some admirers stick money in the windowpane as a tribute.

He’s constantly searching for his building blocks. “I look in the garbage — everywhere,” he said, laughing. “I must have spent hundreds of dollars in the dollar store.” A friend brings him moss from upstate when he goes hunting. Now and then, he buys more formal pieces from Fontanini, an Italian company that specializes in presepi.

Every year, his outdoor setup changes a little. For 2018, he has incorporated a scene from the Amalfi Coast, adding a handful of fishermen and boats which he bought in Italy last August.

He uses mirrors to add depth and make it seem as if his caverns go deep. “People say I’m an artist, but no,” he said, shaking his head. “Kids do it in Italy. It’s a dime a dozen.”

Gianvito Bottalico, a retired employee with the Metropolitan Transportation Authority who creates his own presepi in Bensonhurst, Brooklyn, remembers building his first when he was a boy with his father inside an empty grape crate and hanging it on the wall in their home in Mola di Bari, on the Adriatic Coast. They used plastic, paper cutouts, cotton balls, whatever they could scrounge up. Flour mixed with water served as glue. “If we had a nickel to put together we would get a statue,” said Bottalico, 70, who came to America at age 19.

Each year, he builds a presepio for the Federation of Italian-American Organizations on 18th Avenue and one for the Knights of Columbus on 85th Street. His personal presepio is built on the piano in his living room and still features basic materials: brown packing paper for the mountainside, milk cartons for houses, dried grape vines, cat litter.

“When I put junk together, I create a place,” Bottalico said. “Now I exist.” He had a suggestion for Sciorra’s waterfall: use two-liter plastic bottles.

In Williamsburg, the bottles were on Sciorra’s kitchen table, cut and ready to go. Sciorra’s father from Carunchio carried the tradition to Brooklyn in the 1950s, incorporating not only the holy family but a lion, zebra and crocodile. “It was his own creation,” Sciorra said. “It was my first sense it wasn’t just the Nativity scene.”

Presepio builders in Italy sometimes incorporate political themes. Last year, Sciorra dabbled with that idea, making a scene with President Donald Trump, same-sex married couples and a border wall. After the Sept. 11 attacks, he built a miniature Tora Bora, and during the Iraq War, he built a battle scene with burned-out buildings and an angel parachuting in.

The centerpiece for this year’s presepio, Sciorra’s 19th, will be the waterfall. Besides the plastic bottles, he will work with slate given to him by his brother and tree branches, which had been stored in his car.

“The idea is to keep it fresh and new,” he said. Sciorra usually has a viewing party for family and friends once there is a finished product. “People bring friends and it’s like, ‘Who the hell is that person taking a picture of my presepio?'” he said, laughing. “It can get out of control. But it’s kind of fun.”