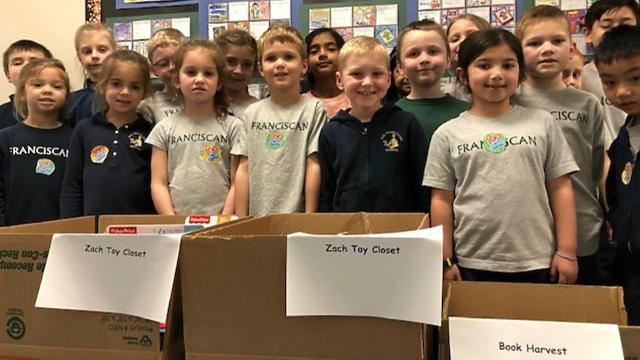 In a fast-paced society, time is a valuable resource. With school, work, errands, family obligations and other responsibilities to juggle, there are seldom enough hours in the day to do it all.

Adding something "extra" to the list can seem impossible and may play a role in why volunteerism often gets pushed to the side.

On average, only 25 percent of Americans regularly volunteer their time in some way. While one may think younger generations are more predisposed to volunteer than their older counterparts, since they tend to have more free time overall, individuals ages 16 to 24 are actually the lowest performing demographic, with a little more than 21 percent devoting time to service.

At the Franciscan School, the faculty and diocese hope to renounce that trend and create a lifelong thirst for service in each of their students.

"We're trying to teach our students that in every single day and every single moment, there's an opportunity to help someone. It's not all about getting a big group together and going to work at Hope Reins [a Raleigh non-profit], or with students who need assistance, or with Miracle League," said Principal Mike Watson. "It's about the things you can do every single day that will help people; those one-on-one opportunities to live out your faith."

Not only is community service a key facet of the overarching curriculum standards at the Franciscan School, but it's also integrated into the students' daily lives. More often than not, the school is promoting some sort of community service project, whether it be raising donations for a local food shelter, visiting the Duke Children's Hospital, or lending a hand in a community garden in downtown Raleigh.

Chris Bjerke has been involved with the Franciscan School since her son — who's now in the eighth grade — was a preschooler. Bjerke herself volunteers frequently with the school, logging hundreds of hours as the middle school receptionist and helping out with various charity efforts around the school.

In the past nine years, Bjerke has noticed the positive impact this emphasis on community has had on her family as a whole, but more specifically on her son.

"It's made him a confident young man who's ready to move on to high school, and for that, I will always be appreciative. He'll always be the young man that's helping somebody else," Bjerke said. "I feel like he's so deeply invested and feels so confident because everybody at The Franciscan School was so invested in him emotionally, spiritually, and academically. They invest in the kids and the families, and they then encourage us to invest in the community."

Bjerke and her family are one of the many that participate in the school's numerous volunteer programs, whether it's serving meals at Oak City Cares, collecting dog food and blankets for the pets at Saving Grace (an idea proposed by the students themselves), assembling birthday gift bags for children staying at the Ronald McDonald House, or delivering Christmas cards to local senior centers.

This year, the students impacted more than 12,000 people during Catholic Schools Week by putting together soup kits, collecting clothes and assembling shoes for various charities.

School programs like Prayer Buddies — which pairs middle school students with elementary schoolers to meet, pray and exchange letters — fosters that same sense of community among the students. For Watson, the volunteer work and student fellowship that the school encourages not only benefits the community at large, but also encourages individuals to reflect on experiences that differ from their own.

"We try to get as hands-on as we can so they can see that it's not about bringing in a can of food or having their parents write a check — they see who it impacts," Watson explained. "In the area of the county where we are, it's a well-off community, and we don't want them to be in a bubble. We want them to understand that not everyone has all the benefits that they have. Not everyone can go home and have dinner waiting; a nice, warm place to sleep; a TV and a laptop. We try, as much as we can, to give them that perspective."

For many students, those lessons of perspective and humility influence them for the rest of their lives. In fact, several alumni of the Franciscan School have gone on to start their own non-profits and ministries, including sisters Heather and Kristen Keleher, who founded Migrant Ministry. The Kelehers still collaborate with the school to collect donations and host drives.

It's not just alumni, however; even current students are eager to donate their free time to the community. In Bjerke's son's case, he started volunteering at the local fire department — on top of an already-busy schedule.

After spending three hours there once a week, he's now officially part of the junior probationary fire program and has been awarded his own fire-fighting equipment.

"He's a normal 14-year-old kid. He runs cross country, he was on the basketball team. The season just wrapped up, but after his games we would go straight to the fire department, and from 7 p.m. to 10 p.m. he would be there, then come home and do his homework," Bjerke said. "I feel like that will be what his career is, because firefighters are givers and that was fostered at the Franciscan School. He got to school and his teachers were like, 'Good job, Max. We heard you made it. We heard you were accepted. You're going to be an awesome firefighter.' It's just … wow, you know?"

"The students at the Franciscan School aren't just doing community service because they have to. They truly want to be a part of something bigger than themselves, and they see the world around them," Bjerke continued. "They don't just see their own world as most children do — and that's perfectly normal — but they have a unique vision of the world and how they can serve in it."

In addition to awareness on a local level, the school regularly brings in speakers that offer students additional perspectives of the world by discussing service needs such as social justice, environmental considerations and migrant hardships. By focusing on the student body, the Wake County community, and the world at large, Watson hopes to give the students a holistic look at the importance and lasting impact of service.