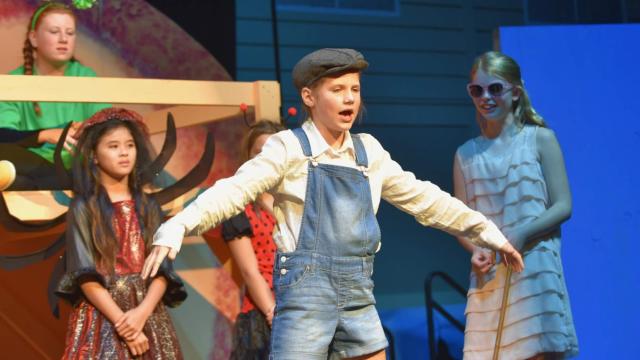 The number one fear for Americans isn't venomous snakes, precarious mountaintops or flying in an airplane 38,000 feet above the ground — it's public speaking. For many, the thought of standing up, all alone, and addressing a crowd brings clammy hands, dry mouths and an overwhelming sense of dread.

At the Franciscan School, a faith-centered private Catholic school in Raleigh, however, that fear is tackled before students graduate kindergarten.

"We're focused on getting the kids in front of the entire school body, whether it's at mass or at morning prayer in their classrooms. We want the children to be confident in their voices," said Julie Sperrazza, a kindergarten teacher at the Franciscan School. "My little kindergartners get up in front of almost a thousand people at mass and speak. It's just ingrained in part of the culture of our school."

Public speaking is just one cog of the innovative curriculum the Franciscan school offers. In fact, Sperrazza recently spearheaded the Reading Level program, an avant-garde initiative aimed to encourage literacy by meeting each child where they are. To do so, each student's reading level is assessed, then teachers design a specialized reading program that caters to their needs.

The Reading Level program is made possible through a partnership with the Franciscan School's Home and School Association and earned funding from two grants, giving the school the ability to expand classroom locations around campus filled with a variety of books in nearly every reading level.

Since starting the program, the school has seen a substantial increase in reading activity in students. In fact, in the middle school classes, teachers challenged their students to read 40 books before the end of the year. At the end of the deadline, the sixth-grade class met its goal, and every student showed more than a year's worth of growth in their reading skills.

While the data is a great reference point, for Sperrazza, it's far from the most valuable part of the program.

"When we think about the success of the program, it would be so easy to look at data, right? We've been tracking DRA [developmental reading assessment] levels, and we've been looking to see how many students are above grade level. We've been looking at our Iowa scores [a standardized reading assessment] and seeing how many kids are at that 99 percent for reading — and those are great," Sperrazza explained. "But what matters to us the most is hearing what the kids have to say. To see the enthusiasm that the program has created with our students; and their love of reading is more important than any data that we could have."

While reading and public speaking make up a significant portion of the curriculum at the Franciscan School, it's just a drop in the bucket of the academic experience. As far as curriculum standards go, the diocese of Raleigh has its own mandates, but it matches closely with the North Carolina standards.

For Principal Mike Watson, however, it's not just about what the curriculum demands, but rather how it's implemented.

"It's the teachers who provide the innovation, the enthusiasm and the dedication to make sure that the students learn how to think; that it's not just rote memorization and regurgitation, but understanding why things happen," Watson said. "In social studies, they're studying different communities and populations, different traditions and different cultures, and why it's all important, so they've gone to synagogues and mosques. In American history, they study the constitution in the eighth grade, so we have a lawyer that specializes in constitutional law come in to talk about it."

He added, "It's really the experience that makes the curriculum come alive. It's not the objectives and the goals."

In addition to classes, the extracurriculars and programs offered by the Franciscan School also promote innovation within the student body. The school's forensics program, for example, allows students to study a recreated crime scene, complete with evidence like tire tracks, footprints and DNA. For younger students, the technology lab provides easily programmable dot-and-dash robots, teaching them the step-by-step process protocol for controlling their own mini-robot.

As far as extracurricular activities go, school clubs include Chess Club, Art Club and Academic Decathlon. The Model U.N. program is a particular favorite of Watson's.

"As middle schoolers, they have to consider all the things that the actual delegates to the United Nations are thinking about when they're trying to work on these things. I'm proud to say that we've solved the Middle East crisis a number of times," he said. "It's out-of-the-box thinking and considering the perspective of different people who have different interests and concerns. They realize it's not always about one side being right and one side being wrong; it's being considerate of other people's opinions, perspectives and needs, and coming to a compromise."

"We don't want people to say, 'I'd love to go to the Franciscan School, I just can't afford it,'" Watson said. "We want them to come talk to us, and we'll say, 'We can figure out a way for you to come to our school given your financial circumstances, where you can get the benefits of this education and we can get the benefit of having your child here.' To us, money is a secondary consideration."

"Even more importantly than that, you're part of the Franciscan School family," Watson continued. "We've had people who have been here for years and have a crisis, like a sick parent or a job loss. They come to us and say, 'I hate to ask this, but could we put on hold our tuition payments for a while?' We always say, 'Not a problem. Don't worry about it.' We have the flexibility to say that to people who have become part of our family."

While Raleigh has no shortage of private schooling options, the holistic academic experience and comprehensive financial aid offered by the Franciscan School has helped it become one of the largest private schools for K-8 students in the area.