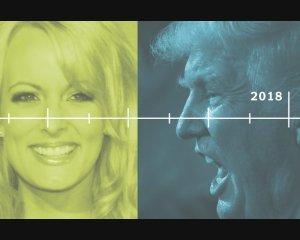 If you are, after all, Donald Trump, the king of grandiosity, go for a name worthy of being Stormy Daniels’ real-life co-star.

Kim Jong Un can drag him away for talks about the relative size of their nuclear buttons. Justin Trudeau can tackle him for relief on tariffs. Robert Mueller can continue his imperturbable march through the Trump family’s field of lies.

But Donald Trump will not be deterred. He is determined to be our most shameless president, running a White House awash in salacious stories and louche characters.

Stormy Daniels’ real name is Stephanie Clifford, but she was called Peggy Peterson, or “P.P.” (shades of the dossier!), and Trump was referred to as David Dennison in the 2016 legal agreement Trump lawyer Michael Cohen drew up to buy her silence before the election for $130,000. (He registered a whole new company in Delaware for this purpose. More tax benefits!)

Stormy, the star of 2016’s “Sex Bots: Programmed for Pleasure,” has learned to be litigious from the master. She sued, claiming the agreement is null and void because Trump, aka John Barron, John Miller and David Dennison, didn’t sign it. But Cohen slapped a restraining order on the actress, even as she sat for a “60 Minutes” segment with Anderson Cooper this past week, presumably to dish without restraint on the Donald.

The president, who often seems short-tempered, nasty and impatient with others and who has certainly been disrespectful to his wife, showed his sweet side to his mistresses in the skin trade.

“He was very curious,” she said. “Not necessarily about the sex or anything like that, but business questions.” Like how much she made off royalties from the movies.

When she asked what was up with his hair, he laughed with her about it. He gave her his ultimate compliment, comparing her to Ivanka. And he didn’t ask to do anything kinky.

“He wasn’t like, ‘Chain me to the bed’ or anything,” she reported, adding that the experience was “textbook generic.”

While she ate swordfish in his room, he watched Shark Week and confided his terror of sharks, adding, “I hope all the sharks die.”

Oddly, for such a germaphobe, he did not use a condom, she said.

When he offered her money after sex, McDougal said, she told him she was not “that girl” and he told her, “You are special.”

The Stormy episode is exactly the kind of embarrassing episode that Trump wiggled out of for decades, denying that he knew women who accused him, playing the legal and media angles to kill stories, getting the help of friends and employees to pay off women.

But times have dramatically changed, post-Weinstein.

At the White House on Friday, Sarah Huckabee Sanders tried again to bury the story, saying, “We’ve addressed this extensively, and I don’t have anything else to add.”

But that isn’t going to mollify the millions of women who find the president’s behavior sordid and unacceptable. Trump and by extension the Republican Party are facing a gender chasm they may fall into in November.

Disgusted with the Rat Pack role model at the top, women are lining up not just to vote, but to run for office. A historic number are running for Congress this year, and in Texas alone last Tuesday, 25 Democratic women won their primaries or advanced to a runoff.