The Fiji Water Girls were at SAG. You might not have seen them. 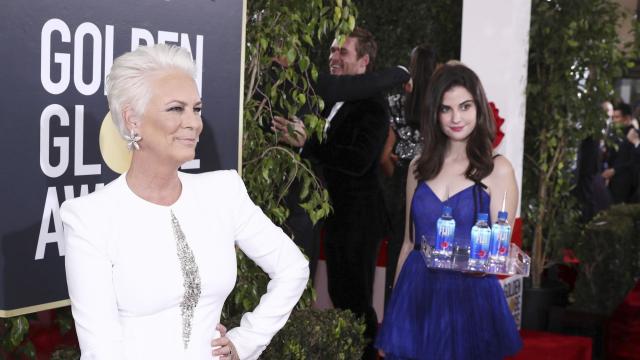 CNN — A Fiji Water spokesmodel went viral on the red carpet of the Golden Globes, but the company was a bit more circumspect at Sunday's Screen Actors Guild Awards.

LA-based model Kelleth Cuthbert made headlines at the Globes after she photobombed plenty of celebs on the red carpet, and also drew some criticism for the public relations stunt.

Cuthbert didn't appear to be present on Sunday's silver carpet, but the company had other representatives there.

Fiji tweeted a photo of four of the young women, wearing their standard blue strapless gowns and lugging the product.

"Welcome to the #SAGAwards!," the company tweeted. "We're honored to be here on the silver carpet to hydrate Earth's Finest in television and film."

Not everyone loved the stunt at the Golden Globes.

"I specifically moved away from the blatant promotions by Fiji and Moet where young women with their trays filled with their wares stood near a designated camera," Curtis wrote. "I knew why there was a photographer poised there and I moved away as I said out loud that I didn't want to be doing advertising for either."