The Fight for Arthur Miller’s Archive 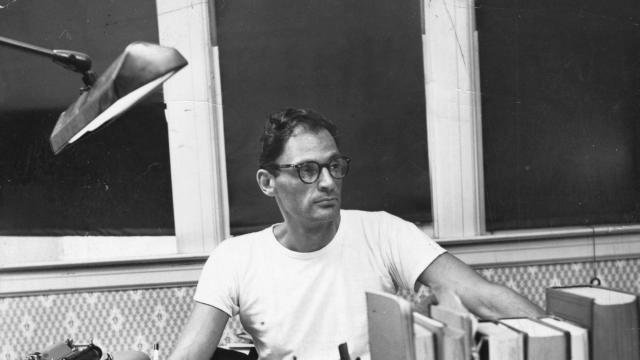 Arthur Miller’s place in the pantheon of 20th-century American literature is secure. But his literary remains have been in limbo since his death in 2005.

More than 160 boxes of his manuscripts and other papers have been on deposit for decades at the Harry Ransom Center at the University of Texas at Austin, uncataloged and all but inaccessible to scholars, pending a formal sale. Another cache — including some 8,000 pages of private journals — remained at his home in rural Connecticut, unexplored by anyone outside the intimate Miller circle.

Now, the Ransom Center has bought the entire archive for $2.7 million, after a discreet tug of war with the Miller estate, which tried to place the papers at Yale University despite the playwright’s apparent wishes that they rest in Texas.

That battle pitted two of the nation’s most prestigious, and deep-pocketed, archival institutions against each other, in a mini-drama mixing Milleresque high principle with more bare-knuckled competition. And it cracks a window onto the rarefied trade in writers’ papers, and the delicate calibrations of money, emotion and concern for posterity that determine where they ultimately come to rest.

The Miller archive, comprising 322 linear feet of material, is certainly a rich one. It documents the whole of his public career, including the development of classic plays like “Death of a Salesman” and “The Crucible” and his showdown with the House Un-American Activities Committee and advocacy against censorship around the world.

There is also intensely personal material, including early family letters and drafts of an essay about the death of Marilyn Monroe, Miller’s second wife, begun the day of her funeral and revised over many years but never published. But therichest vein may be the journals, which span more than 70 years, often mixing fragments of works in progress with intimately diaristic reflections.

“Arthur wrote about everything in his journals,” said Julia Bolus, Miller’s longtime assistant and director of the Arthur Miller Trust, who is co-editing a volume of selections. “They were the place where all the elements of his life came together.”

Those journals are closed to researchers until after publication of that volume, by Penguin Press. But when made available, Stephen Enniss, the director of the Ransom Center, said, “they will really allow us to see one of our finest playwrights in a very full and human way.”

The Miller papers trace the arc of the American 20th century, both in contents and materials, which range from marble-covered drugstore notebooks to computer printouts. But their journey to Texas also unfolded over a nearly 60-year period that tracks the rise of the modern market in writers’ papers, as it evolved from a clubby business governed by gentlemen’s agreements to a highly competitive arena marked by sometimes eye-popping prices.

Miller began his relationship with the Ransom Center in the early 1960s, a moment when the center, flush with oil wealth, was emerging as the field’s most unabashedly aggressive player. Short on cash and facing a big tax bill, he donated 13 boxes of material, including multiple manuscripts and working notebooks for the plays that made his name — including “Death of a Salesman,” “All My Sons” and “The Crucible” — in exchange for a tax deduction.

In 1983, after a fire damaged Miller’s house in Roxbury, Connecticut, he shipped 73 boxes to Texas for safekeeping. In a letter held at the Ransom Center, he said he’d like to eventually formalize the transfer either by sale, or by donation should the tax deduction (which had been eliminated in the early 1970s) be restored.

“I am in full agreement with your suggestion that I give them absolute first refusal in whatever decision I make for the disposition of the archive,” he wrote to Manhattan bookseller Andreas Brown, who was serving as his archival consultant.

In January 2005, a few weeks before his death at 89, Miller shipped 89 more boxes to the Ransom Center, whose extensive American theater holdings also include the papers of Tennessee Williams, Lillian Hellman and Stella Adler.

“He always told me the stuff would go down to Texas, which is the only logical place,” said British scholar Christopher Bigsby, a longtime friend of Miller’s who was given access to Miller’s archive for his 2009 biography.

Enniss said that he contacted the estate in September 2013, shortly after becoming director of the Ransom Center, to discuss formally acquiring the balance of the archive. A few months later, he visited the Miller home, to see the journals and other material there.

In March 2014, the Ransom Center made what it called “a good faith offer.” But it said the estate’s representative, the Wylie Agency, “never meaningfully engaged in a negotiation.”

In the summer of 2015, three staff members from Yale’s Beinecke Rare Book and Manuscript Library visited the Ransom Center to inspect the Miller collection. Yale then made an offer of $2.7 million for the materials on deposit, plus some 70 boxes still held by the estate.

The Ransom Center matched the price, which Enniss called “aggressive,” but refused to go higher, citing Miller’s 1983 letter. “We made it quite clear we believed a legal commitment had been made, and that we had a right of refusal,” he said.

Sarah Chalfant of the Wylie Agency said that the estate had engaged with the Ransom Center “exclusively for more than a year in good faith negotiations.” She declined to comment on Miller’s 1983 letter, but said the Miller family had “reviewed carefully Arthur’s stated wishes on the matter over the course of his lifetime.” (Miller’s literary executor is his daughter Rebecca Miller, the writer and director.)

The estate said that it had “taken a number of factors into consideration” in approaching Yale, including the fact that Miller had lived much of his life in Connecticut and that the Beinecke had acquired the archive of photographer Inge Morath, Miller’s third wife, in 2014.

“Ultimately, we decided to keep the archive whole at the Harry Ransom Center, one of the foremost facilities for preservation and research, where we are certain it will be cared for in the best possible way,” the estate said.

Given that the Ransom Center owned the early play manuscripts donated by Miller outright, any sale of the remaining papers to another institution would have run against the old-school principle that archives should not be divided.

“It makes things difficult for researchers,” said David Zeidberg, who retired in December after 21 years as director of the Huntington Library in San Marino, California, home to the archives of Octavia Butler, Hilary Mantel and Paul Theroux, among other contemporary authors. If someone offered them material from a writer whose substantial holdings were elsewhere, “we would really try to talk them out of it.” Whatever Miller’s desires for the ultimate disposition of his archive, Bolus said that Miller, an avid carpenter, created it with the same meticulous sense of structure he applied to everything, whether his plays or the writing studio he built for himself.

“When he asked me to file something, he would say, ‘This might be worth 12 cents some day,'” she recalled. “He knew he was building an archive. He saw that the smaller pieces of his day-to-day life helped to make up this larger record of his work.”

That larger record includes what Bigsby, the biographer, called “an Aladdin’s cave” of unpublished writing: novels, stories, poems, essays and even speeches.

It also includes personal letters that illuminate his work, like a 1935 letter from his brother, Kermit, announcing his initiation into “that most honored fraternity, the traveling salesman’s.”

An inventory of the archive notes journal entries relating to Monroe. But it does not list any personal correspondence between her and Miller, the survival of which has been the subject of speculation over the years.

In a 2002 article in Talk Magazine, Brown, the dealer who arranged the earlier deposits to the Ransom Center, described coming across an odd bundle, which Miller told him held nearly 100 letters from Monroe. “It was all sealed and tied-up,” Brown, who is now retired, recalled in a recent interview.

Miller’s memoir, “Timebends,” refers to correspondence with Monroe, and one of his passionate love letters to her fetched $43,750 at auction in Beverly Hills in 2014. “It was a really over-the-top Tom Cruise, jump-on-the-couch kind of letter,” Bigsby said.

But Bigsby is skeptical that a secret mother lode survives. “When I asked, he said he had no more than four or five of her letters,” he said of Miller.

Enniss said that the Ransom Center would continue to seek out Miller-related material from whatever source.

“The acquisition of an archive,” he said, “isn’t just a one-time event.”