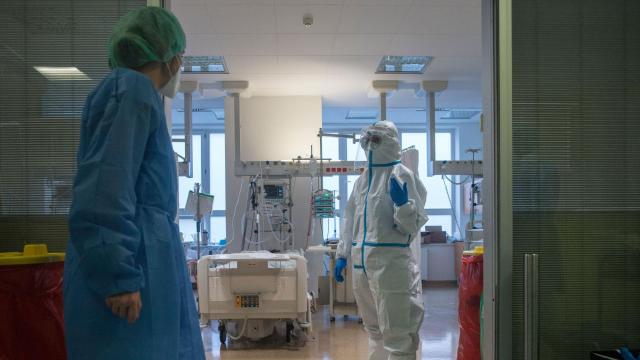 CNN — The European Union has earmarked 220 million euros ($257 million) to fund the transfer of Covid-19 patients across its borders to prevent the hospital systems in the 27-nation bloc from buckling.

Europe has become the world's epicenter of the virus for the second time since the pandemic began, forcing several countries to reimpose national lockdowns as a second wave envelops the region and infections surpass 10 million.

Health officials in several EU countries have warned that their hospitals are near capacity and have raised the alarm that more cooperation is needed to ensure facilities are not overwhelmed.

"But the spread of the virus will overwhelm our healthcare systems if we do not act urgently."

Von der Leyen made her comments at a meeting with EU leaders, in which she laid out a number of measures to streamline and centralize the bloc's Covid-19 response, from the use of tests, tracing apps and the distribution of vaccines.

The EU chief said the bloc was intensifying its efforts in obtaining and validating a vaccine, and that its members had agreed to a "fair distribution" to each state.

"The member states will all get vaccines at the same time and at the same conditions, based on their share of the EU population they have," she said.

The EU will also now carry out rolling reviews from pharmaceutical companies, who will share quicker "step-by-step" updates with the bloc as they carry out their trials.

In terms of testing, the bloc is working to validate rapid antigen tests that can provide quicker results than the PCR (polymerase chain reaction) tests currently in use. In addition, the EU aims to mutually recognize test results across the bloc.

It will also try to share data collected through tracing apps. Twenty-two of the 27 member states have developed or are in the process of developing an app, and three have connected to a new European gateway since Monday. The 19 others hope plan to join in November.

Von der Leyen said there had been around 50 million app downloads in the bloc, but that was "not enough."

"We need across the board coverage in the European Union," she said.

The EU's effort to centralize its response comes after it was criticized for poor coordination at the beginning of the region's outbreak. Hard-hit countries like Italy pleaded with the bloc's leaders for support, turning instead to China for medical equipment.

Some EU governments at the time banned the export of medical supplies in the bloc -- which is a free-trade zone -- to ensure enough for their own people, while others were forced to compete for limited personal protective equipment and ventilators.

Von der Leyen called for vigilance as the region struggles to balance keeping their economies and social lives ticking with quelling an aggressive second wave.

"I understand how tired and worried everyone is. We are wondering when we will come out of this crisis. But now is the time for patience, determination and discipline for all of us," she said.

"Wear a mask, avoid crowds, avoid close contacts and avoid closed spaces with poor ventilation -- that is key. Simply doing this will enormously help in our efforts. And that way, all together, we will overcome the virus."