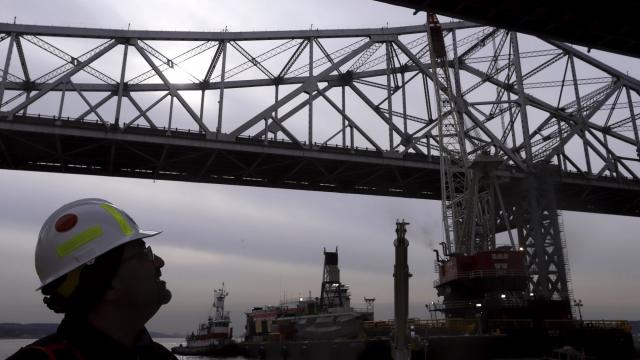 TARRYTOWN, N.Y. — The end is in sight for the old Tappan Zee.

This now-haggard bridge, whose three-mile glide over the brisk, choppy waters of the Hudson River north of New York City thrilled children seeing the bridge for the first time in the mid-1950s, and at its peak did the brute work of carrying almost 140,000 cars a day, is growing thinner, shorter and more fragile.

Having lost its reason for being when traffic was shifted to one of two cockily stylish twin replacement spans, its steel and concrete sections are being picked apart by crews of ironworkers and shipped off for use in other bridges and highways like kidneys and livers destined for organ transplants.

It is no longer even a bridge, its two ends having been lopped off, leaving immense voids that extend from each bank of the Hudson. The fact that it is now stranded in the water openly declares that after 62 years the bridge’s time is up.

The Tappan Zee is being supplanted by what has formally been christened the Gov. Mario M. Cuomo Bridge, named after the father of the current governor, Andrew M. Cuomo, who jump-started the long delayed, $4 billion project in 2013. The first new span started carrying eight lanes of two-way traffic in October between Westchester and Rockland counties. But traffic will be scaled down to four Rockland-bound lanes once the second Westchester-bound span is completed, which is supposed to occur in June. Both spans will then have wide shoulders to accommodate broken-down vehicles and eventually a pedestrian and bike path.

The operative verb for breaking up the old Tappan Zee is dismantle not demolish. Demolish, with its connotations of a thunderous explosion, is what happened to the old Kosciuszko Bridge in New York City when its steel ramps went down in puffs of gray smoke in a carefully controlled detonation. But the Kosciuszko hopped over the rather narrow and stagnant Newtown Creek, while the Tappan Zee stretches over a pulsing, vital river prized by both ships and aquatic life.

To conform with state environmental regulations, any debris or concrete, steel and wood projectiles must be cleaned out down to the mud line of the river bed to allow fish and other species to feed and spawn.

So the old Tappan Zee cannot be blown up but instead must be disassembled piece by piece like a delicate pile of pickup sticks. The sheer volume of salvage material — 302,000 tons of concrete, 46,790 tons of steel, 13,192 timber piles, 196 piers or columns and more than 2,000 precast deck panels — has to be moved somewhere else. Finding places that will accept all that salvage has been daunting, said Bob Kick, construction manager for Tappan Zee Constructors, the consortium hired to build the bridge.

“Imagine returning a Christmas gift and trying to jam it into a box,” he said. “It’s much easier getting the gift out of the box when it’s new.”

The dismantling has involved what the officials called “reverse engineering” of the bridge’s construction and before it started engineers spent months poring over shopworn blueprints of the bridge.

“We’ve had to study the entire life cycle of this living breathing organism to make sure we account for current construction conditions of the bridge,” said Blake Yaffee, Tappan Zee Constructors’ demolition manager.

It was serendipitous that one of the four companies in the consortium was American Bridge Co., which built the Tappan Zee between 1952 and 1955, said Jamey Barbas, who has directed the new bridge project for the New York State Thruway Authority.

The actual dismantling began with the removal of all the “gingerbread” — the lighting poles, signage, guard rails and other nonstructural elements — and then focused on stripping away the asphalt road surface. Even those tasks were not straightforward because the bridge was opened when asbestos, lead paint and PCBs were not considered the dangers they are today.

Removing the concrete decks underlying the asphalt came next, many of which were installed in recent years as repairs had to be made to a bridge that had exceeded its useful 50-year life. One hundred thirty-five decks — each approximately 13 feet wide by 50 feet long — will be sold for $1 apiece to eight New York counties, the state Department of Transportation and the town of Montgomery in Orange County to be used to construct or repair bridges and roads.

Generally working top to bottom and on some days battling icy whipping winds, work crews have deployed acetylene or oxygen blowtorches to shear off rivets so they can separate the steel girders and supporting trusses of the approaches to the bridge’s main span into manageable pieces. Cranes then drop the steel trusses onto barges floating below. The strongest crane, Left Coast Lifter, one of the world’s largest floating cranes, was shipped in from Oakland, California, especially for such herculean tasks. Perhaps the trickiest work was removing a 235-foot-long steel truss that extended over the tracks of a line on the Metro North railroad. For that, train service was suspended for several hours. The massive crane lifted the heavy piece and dropped it on a barge and train service resumed.

The timbers used to protect the bridge’s supporting columns and support parts of the causeway can be pulled out by cranes like a dentist pulling teeth. The pillars that tether much of the long causeway on the Rockland County side of the bridge have to be cut at the base and knocked over using a variety of underwater machinery, including excavators, hydraulic shears and hydraulic jackhammers.

Soon, workers will tackle the main span, which is over 1,200 feet long and looks like a double sine wave assembled with an old Erector set. It is a cantilever-type construction, which in this case means that anchored arms, each about 340 feet long, extend over the water and together hold up a 531-foot-long central piece, bolstered by two 602-foot-long steel side supports. Once disconnected from the rest of the bridge, the central span will be lowered in three sections to barges using a system of powerful “strand jacks"— enormously souped-up versions of the homespun car jack — and cables.

The steel trusses will end up in a recycling center in Albany. The concrete rubble and timber are also being shipped to Port of Coeymans, 10 miles south of Albany. Some truss pieces are destined for scrap yards in Clermont, New Jersey, near Cape May. Old sections of deck and concrete structures will end up in Perth Amboy, New Jersey.

Officials said they could not estimate the value of all that salvage, but that any profits belong to Tappan Zee Constructors, which essentially took over ownership of the old bridge.

The entire bridge will have vanished on the Hudson sometime in 2019, a bittersweet prospect for workers who have long used it for their own commutes.

“It’s definitely sad to see it go,” said Ryan Candrilli, 38, who lives in Bergenfield, New Jersey. “From going over it so many times, I even got used to the bumps.” Among the big dismantling challenges that still await are the caissons used for propping up the Tappan Zee’s main span. The Tappan Zee was built during the Korean War when prime-quality steel for domestic use was in short supply so engineers used a shortcut perfected during the D-Day landings in World War II: caissons, or hollow concrete chambers, whose buoyancy holds up the bridge. Eight underwater rectangular caissons support 70 percent of the bridge’s dead weight and 30 cylindrical caissons hold up the rest. Although the caissons are braced underneath by concrete pillars driven into bedrock, the buoyancy of two of the rectangular caissons, each 100 feet by 190 feet, serve as a foundation for the two massive towers of the main span.

To free the circular caissons, a crew of divers — dressed in deep sea diving suits — shears the concrete piles underneath with electric cutting rods whose temperatures exceed 10,000 degrees Fahrenheit. The caissons’ concrete walls are then chopped up into cubes using hydraulic hammers and shipped out on barges.

The other day divers were working in subfreezing temperatures. But the dismantling engineers had that problem figured out, too.

They ran hot water through the suits to keep the divers warm.