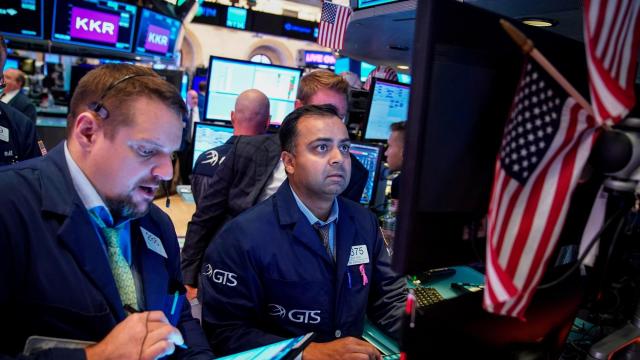 CNN — The Dow and the broader stock market rallied Friday, ending what has been a volatile week.

Investors are betting that signs of an economic slowdown are strong enough to keep the Federal Reserve on track to continue cutting interest rates, a move that would boost stock prices.

Stocks climbed following the September jobs report, which showed that 136,000 jobs were added to the economy. The unemployment rate dropped to 3.5%, its lowest level since December 1969.

Paul Ashworth, chief US economist at Capital Economics, called the report a "mixed bag" because of stagnant paycheck growth. Wages grew at their slowest pace since July 2018, which could slow consumer spending.

In addition, the pace of hiring continues to slow, partly because the United States is very close to full employment.

"In a sane world, the Fed would be raising rates on this data, but alas, they are still likely to cut in October," said Bryce Doty, senior portfolio manager at Sit Fixed Income Advisors.

"Not because of the state of the domestic economy," Doty added, as weakness in manufacturing caused by trade worries can't be fixed with monetary policy. But much rather because the rest of he world has been shaken by the trade war and is slowing down.

Still, the Dow and the S&P finished the week in the red. The Nasdaq, which was also on track to close lower at the start of the day, eked out a weekly gain thanks to the day's rally.

To be sure, America's economy remains strong: A tight labor market has kept consumer spending robust. Consumers account for two-thirds of gross domestic product. But the manufacturing sector contracted in September, the second month in a row. The services sector grew at a weaker pace last month. And Friday's jobs report wasn't hugely encouraging.

As stocks slumped this week, safe-haven assets like bonds and gold moved higher, which has led to higher expectations for further interest rate cuts by the Federal Reserve.

Investors are still betting on an interest rate cut from the Federal Reserve later this month, even though the chances eased some after the jobs report came out. The likelihood is now at 78%, according to the CME FedWatch Tool.

The Fed's recent rate-cutting has intermittently given stocks a boost in recent months. But investors haven't ignored the slowing US economy, either. A series of disappointing reports about the US manufacturing and services sectors pushed the Dow lower by 800 points over the course of Tuesday and Wednesday.