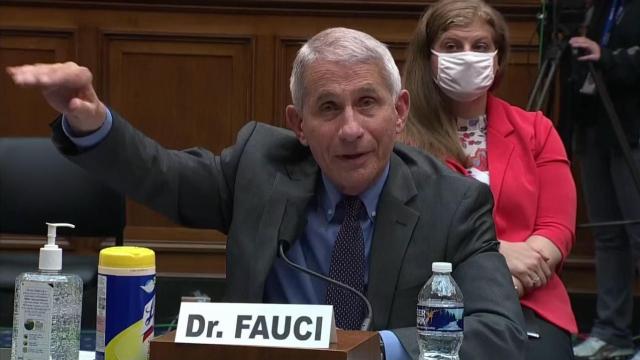 EDITOR'S NOTE: Frank Bruni is a New York Times columnist. He has held a variety of jobs with the newspaper including White House reporter, Rome bureau chief and chief restaurant critic — before becoming a columnist. He is the author of three best-selling books.

President Donald Trump was right about the “deep state” — sort of. There exist, in government, people and forces rigged to foil disruption.

But the deep state isn’t, as he suggested, a reflexive defense of a corrupt status quo. It’s a righteous defense against the corruption of democracy, which he continues to attempt.

And that defense is holding. Three cheers for the deep state, which has been on a roll these past three weeks.

I’m thinking of Brad Raffensperger, Georgia’s secretary of state, who supervises its elections. He refused to cry foul and fraud just because others in his party couldn’t abide Joe Biden’s victory in a state that hadn’t gone to a Democrat in a presidential election for nearly three decades.

“People are just going to have to accept the results,” he told The Washington Post. “I’m a Republican. I believe in fair and secure elections.”

He ordered a recount, but as Trump, the two U.S. senators from Georgia and plenty of others on the right pilloried him, he stuck to his assurance that a fair and secure election was precisely what Georgians had participated in and what had delivered the state’s electoral votes to Biden.

He was bolstered Tuesday by another top-ranking Georgia official, another Republican not about to let the republic go to hell. Gabriel Sterling, Georgia’s voting system implementation manager, scolded and shamed Trump at a news conference at the state Capitol, warning the president that his unwarranted smearing of the balloting in Georgia was “inspiring people to commit potential acts of violence” and that “someone is going to get killed.”

That was the deep state speaking, and its words were gold.

Raffensperger and Sterling are hardly the only Republican election officials who have refused to buy into Trump’s conspiracy theories. They have restored some of the faith and hope in me that the past four years eroded.

“We have not yet been made aware of any information that would change the outcome of the election in Michigan and, as legislative leaders, we will follow the law and follow the normal process regarding Michigan’s electors,” they said in a joint statement immediately following their meeting with the president.

Follow the normal process. Such milquetoast verbiage, and such a titanic reassurance.

Also in my deep state: Judge Stephanos Bibas of the 3rd U.S. Circuit Court of Appeals in Philadelphia, a Trump appointee who, in a blistering ruling Friday, rejected the president’s efforts to invalidate millions of Pennsylvania ballots.

“Voters, not lawyers, choose the president,” he wrote on behalf of the three judges hearing the case, all appointed by Republicans. “Ballots, not briefs, decide elections.”

Such statements of the obvious, and such sweet, sweet relief.

Was there a seed of truth in Trump’s fulminations about insiders so stuck in their ways and attached to their stations that they might balk instinctively at newcomers and new ideas? Absolutely. That’s a danger within any sprawling and enduring organization. It’s something to watch for and worry about.

But Trump’s watching was paranoid. His worry was hysterical. And his motive wasn’t the improvement of government but the inoculation of self. The deep state saw through that, and the deep state stirred.

“Deep state” isn’t the right term — its overtone is too clandestine, its undertone too nefarious — but let’s go with it, co-opt it, turn a put-down into a point of honor, the way gay rights activists did with “queer” and anti-Trump feminists did with “nasty woman.”

Let’s define it ourselves, not as a swampy society of self-preserving bureaucrats in Washington but as a steadfast, tradition-minded legion of public officials and civil servants all over the country, in every branch of government.

These officials and servants are distinguished by a professionalism that survives and edges out their partisan bearings, by an understanding that the codes of conduct and rules of engagement become more important, not less, when passions run hot. They’re incorrigible that way. Invaluable, too.

“Thank God for the deep state,” John McLaughlin, a former deputy and acting director of the CIA, said in October 2019 at a panel on election security at the National Press Club in Washington.

It was organized and sponsored by the Michael V. Hayden Center for Intelligence, Policy and International Security at George Mason University, and McLaughlin’s fellow panelists were other former leaders of the CIA and FBI.

But my deep state is both deeper and broader than those agencies. It extends beyond the diplomats (William Taylor, Marie Yovanovitch) and security officials (Lt. Col. Alexander Vindman) who played starring roles in Trump’s impeachment.

Anthony Fauci is the steely superhero of my deep state, but he’s flanked and fortified by all the government health officials who also pushed back against the quackery of Scott Atlas, the Trump-flattering pandemic adviser who resigned Monday.

They belong to a quiet and then not-so-quiet resistance that blunted, thwarted or tried to blunt and thwart Trump’s worst impulses when it came not just to public health but also to foreign policy, immigration, the environment. In The Times late last week, Lisa Friedman described such efforts within the Environmental Protection Agency.

“With two months left of the Trump administration,” she wrote, “career EPA employees find themselves where they began, in a bureaucratic battle with the agency’s political leaders. But now, with the Biden administration on the horizon, they are emboldened to stymie Mr. Trump’s goals and to do so more openly.”