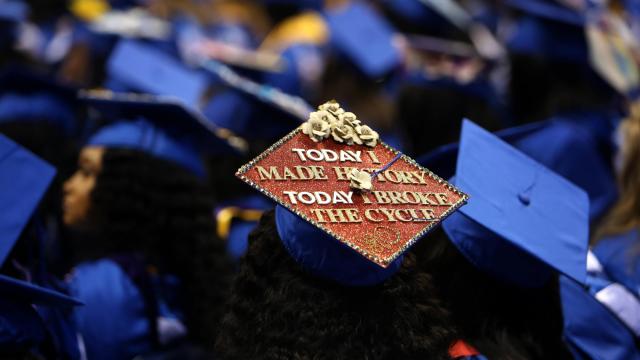 EDITOR'S NOTE: David Leonhardt is an Opinion columnist for The New York Times. Sahil Chinoy is a graphics editor for Opinion. Erica Blom, Kristin Blagg and Matthew Chingos of the Urban Institute helped conduct the analysis. An interactive version of this column, including detailed graphics, is available here.

American higher education has a dropout problem. About 1 in 3 students who enroll in college never earn a degree. But a solution is staring us in the face: Schools with similar students often have very different graduation rates. This suggests that the problem isn’t the students — it’s the schools.

Take Western Kentucky University and the University of Nevada, Las Vegas. At both, the expected six-year graduation rate is close to 60 percent

But the actual graduation rate at UNLV is 19 percentage points lower than at Western Kentucky. In human terms, that amounts to about 500 more dropouts at UNLV each year. If struggling schools could learn from the high performers, tens of thousands more students could graduate each year.

The New York Times and the Urban Institute’s Center on Education Data and Policy undertook this project because the dropout crisis is a major contributor to American inequality. Many lower-income and middle-class students excel in high school only to falter in college. Research shows that Americans without degrees earn less and score lower on measures of health and happiness.

For too long, high school students, parents and guidance counselors have hardly thought about graduation rates when choosing a college.

But now people are starting to realize the stakes. Alliance, a network of charter schools in Los Angeles, has put together its own ranking, based on colleges’ graduation rates for students who are black or Latino (as most Alliance students are). It then encourages students to attend a college with a relatively high rate. “A bachelor’s degree,” said Catherine Suitor, Alliance’s chief advancement officer, “is the single most influential determinant in multigenerational change and ending the cycle of poverty.”

We found that the list of top-performing colleges — those that exceed their expected six-year graduation rate — is diverse in almost every way. It includes private colleges like the University of La Verne, in Southern California, as well as historically black colleges like North Carolina Central and Fayetteville State. It also includes big public universities like Virginia Tech and several branches of the State University of New York. The group of underperforming colleges is also diverse, although the outliers in our analysis are public.

Why do some colleges do so much better than others? Part of the answer involves structure. Students tend to do better when they are following defined academic paths, rather than “aimlessly signing up for classes,” as Pamela Jackson, the provost of Fayetteville State, said.  Her university, for instance, no longer allows students to be classified as “undeclared,” instead assigning everyone a “premajor” based on the interests they listed on their application.

Perhaps the biggest lesson from our reporting is that the colleges with higher rates of success simply seem to have been trying harder for longer. They collect more data and use it to remove hurdles for students. They deepen students’ connections to other people on campus, including their classmates, professors and advisers. “A lot of it seems like it’s attention to detail in catering to students,” said Leebo Tyler, a recent graduate of Troy University, an Alabama school with a higher-than-expected graduation rate.

Another important factor involves student living. At colleges where more students live on campus, graduation rates tend to be higher. “Living on campus puts you so much closer to all of the resources that are accessible to you,” said Jessica Burley, who graduated this year from the College at Brockport, a SUNY school, with a double major in criminal justice and sociology. As Kim Wilcox, the chancellor at California, Riverside, said, “It’s harder to fall through the cracks.”

Building dorms costs money, as do many strategies that help students succeed. We found that colleges that spend more money on students also tend to outperform their expected graduation rates. Unfortunately, most states have reduced per-student funding over the past decade, and some of them have done so sharply.  Several states with particularly low average graduation rates, like Arkansas, Missouri and Nevada, also spend relatively little on higher education.

The most effective way for colleges to spend money may be to give it to students — not just to pay for tuition but also to cover living expenses. Research has found that financial aid tends to lift graduation rates, said Ben Castleman, an education professor at the University of Virginia. Affordability is “probably the biggest factor” prompting dropouts, he said. One strategy involves expanding the definition of financial aid to help students with unexpected problems, like a broken-down car or a laid-off parent, that can lead them to leave campus. La Verne has set aside $1 million next year for seniors who encounter a financial hurdle. North Carolina Central has a similar program to help students complete their “last mile.”

But some colleges succeed despite modest budgets. Troy is one example. It spends less than half as much on students as a typical flagship state university. The secret, administrators say, is to teach students how to be college students. Hal Fulmer, Troy’s dean of undergraduate studies, offers a sports analogy: If you ask an NFL rookie “what the biggest difference is between college and the NFL, that rookie will say, ‘The speed of the game,’” Fulmer said. “The biggest challenge from high school to college is the speed of the game.”

In college, students face many more decisions — about what to study, where to eat, when to sleep — than in high school. To help, Troy improved its advising system. The student-support center, Fulmer said, used to be seen as “the center for students with problems.” He instead wants it to be like a kitchen table, a safe place where students can go to get encouragement and sometimes tough love.

The University of Houston has long underperformed on graduation rates. But Houston’s president, Renu Khator, has made lifting its rate a “no-excuse priority.” Over the last decade, Houston’s six-year graduation rate has risen almost 20 percentage points, to more than 65%. That’s still low, given its student body.  And some of the increase stems from the fact that Houston now enrolls better-prepared students.  But the university has made concerted efforts to reduce dropouts, including encouraging students to take a full load of classes and being more proactive about helping those who show signs of struggling.

Houston happens to be in a region, encompassing Texas, Oklahoma, Arkansas and Louisiana, where high dropout rates are the norm. This pattern may stem in part from factors beyond the colleges’ control — and factors that our analysis didn’t take into account. Perhaps high school students in this region are disadvantaged in ways that their SAT scores, income, race and other demographic data do not fully capture. But that’s very unlikely to be the entire explanation.

Houston’s recent progress is encouraging because it shows that poor performance is not inevitable. When college leaders, in any region, decide they’re no longer willing to accept subpar graduation rates, they can do something about it.