The case of the curiously compelling Dennis Rodman-Chris Cuomo interview 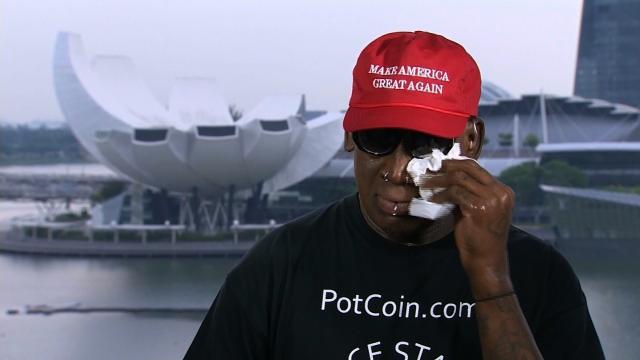 (CNN) — There's a tendency when the name "Dennis Rodman" is uttered to immediately roll your eyes.

"The Worm," as he was nicknamed during his days as a ferociously effective rebounder for the Detroit Pistons and Chicago Bulls in the '80s and '90s, has become, over the intervening decades, sort of a dictionary definition of what happens when you struggle with alcohol addiction. Rodman, for much of the past decade, has been playing a stereotype of himself -- the brash, unpredictable provocateur. He's had a series of reality TV appearances -- including on Donald Trump's "Celebrity Apprentice" -- and, earlier this year, checked himself in to an alcohol rehab center.

Rodman has only been relevant in any meaningful way in politics during his seeming long, slow fade from celebrity with repeated trips to North Korea to meet with his self-professed "friend" Kim Jong Un. Rodman was lambasted for these trips in the past, accused of being used as a tool for a murderous dictator. He has responded, Rodman-like, badly -- savaging his critics including Barack Obama and Hillary Clinton.

Which brings me to Monday night -- and Rodman's interview from the Singapore summit between Trump and Kim, with CNN's Chris Cuomo.

I'm not sure if it was my own admittedly low expectations or Rodman's performance -- or some of both -- but I found him not only totally compelling, but sympathetic as well.

My re-assessment of Rodman actually began before he even appeared on screen. It came when former Director of National Intelligence James Clapper said this about Rodman: "He is a unique person since he has a relationship with both Kim Jong Un and with Donald Trump and obviously has great rapport with Kim Jong Un, who is a basketball fanatic himself. So I think that there is potential here to engage Dennis Rodman in a serious way in promoting this relationship."

I did a double take. I actually rewound the TV to make sure I heard it right. The former head of the DNI touting The Worm's diplomatic prowess? Whaaaaa?

But then Rodman started to recount his attempts to convince former President Barack Obama of Kim's willingness to make a deal as long as five years ago. And he started to cry. Here's the passage, from "Cuomo Prime Time:"

Now. Simply because Rodman got emotional doesn't mean everything he said is accurate. His relationship with Kim is not even close to the relationship the average North Korean citizen has with Kim. In traveling repeatedly to North Korea pursuing basketball diplomacy, Rodman, with his actions and his words, seemed to cast a blind eye on the human rights violations and atrocities committed by and under Kim. That's not up for debate.

And yet, the Rodman on TV Monday night was someone who desperately wanted to be seen, heard and acknowledged. Who believed he has something to give. Who, in his own flawed way, wanted to help.

In short: There's more to Dennis Rodman than the caricature he has cultivated both during and after his basketball career. No, that doesn't absolve him of his past comments or his past behavior. And, no Rodman isn't going to be leading our efforts to de-nuclearize the Korean peninsula.

But neither should he be solely the butt of jokes either.

"I saw a Dennis Rodman that I have never seen before on the course of that interview, and you drew that out of him," Clapper told Cuomo after the Rodman interview. "A lot more depth there than I think meets the eye and he does understand Kim Jong Un, and all the rest of us, pundits, were kind of amateurs and haven't had that direct contact like he has."