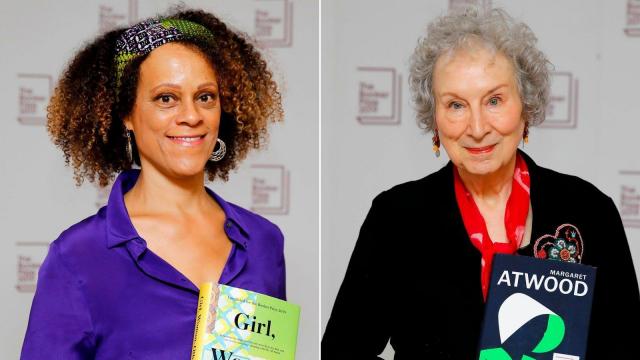 CNN — This year's Booker Prize goes against the rules and traditions of the award by naming both Margaret Atwood and Bernardine Evaristo as joint winners on Monday.

The two winners were narrowed down from a shortlist of six authors. Atwood is recognized for "The Testaments," a sequel to "A Handmaid's Tale." Evaristo won for her book "Girl, Woman, Other."

This will only be the third time that a dual award has been given. In fact, the award changed its rules in 1993 to clearly state that "the prize may not be divided or withheld" after the second two-author win.

But the judges said they simply couldn't make a decision.

"Over an agonizing five hours, the 2019 Booker Prize judges discussed all of the much-loved books on their shortlist, and found it impossible to single out one winner," said Gaby Wood, literary director of the Booker Prize Foundation, in a statement.

"The Booker Prize has been jointly awarded twice before, to Nadine Gordimer and Stanley Middleton in 1974 and to Michael Ondaatje and Barry Unsworth in 1992," according to the Booker Prize website.

Their individual awards in themselves have made history. This is Atwood's second Booker Prize and she will be the oldest recipient the award has ever had at 79. Evaristo will be the first ever African American woman to win a Booker Prize.