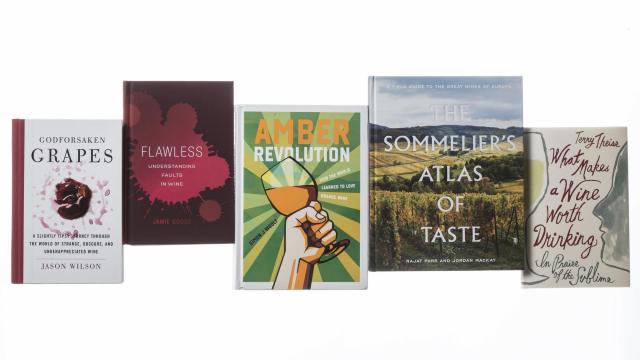 Wine invites contemplation — of the world, of our place in it and sometimes just of wine itself.

Why does this wine taste as it does? What makes a bottle great? Or flawed? Can a glass still surprise us? What makes some grapes well-accepted and others not?

This year’s crop of excellent new wine books was particularly contemplative. Here are five of the best.

Charting Terroir, One Plot at a Time

Rajat Parr has led a storied career as a sommelier and now as a wine producer in the Santa Rita Hills of California and the Willamette Valley of Oregon. Jordan Mackay is an acute observer of the wine world and an excellent writer and reporter. Together, they have produced a fascinating book, “The Sommelier’s Atlas of Taste: A Field Guide to the Great Wines of Europe” (Ten Speed Press, $40).

As their starting point, they address the question that routinely occurs to every thinking wine drinker: Why does this wine taste this way and that one, made from the same grapes a mile away, taste entirely different?

The authors visited some of the great wine regions of Europe and posed the question directly to vignerons, the people who grow the grapes and make the wines. The vignerons shared their observations, born of generations of experience with particular terroirs, and Parr and Mackay added their own detailed perceptions about the wines.

The results are equations that correlate the intricacies of terroir — soil, climate, elevation, angle of inclination and the human element (which can be expressed in some unexpected ways, as when people reconstruct vineyards with stones and soil) — with a microscopic parsing of the wines themselves. The writers explain, for example, why wines made in the northern quadrants of the Nuits-St.-George region of Burgundy can be so different from those made in the south, and what might separate the chenin blanc grown in the schist of Savennières from chenin blanc on limestone in Vouvray.

The “Great Wines of Europe” portion of the title is misleading. The focus is primarily on France, which indeed has a solid claim to any investigation of terroir. While several other countries are visited, some regions feel like afterthoughts.

Each section of the book concludes with a short list of producers recommended by Parr. These lists would have been more useful had they included more up-and-comers and fewer choices like Domaine de la Romanée-Conti and Domaine Raveneau, which are universally acknowledged to be great and exorbitantly expensive.

Still, Parr is an excellent curator of wine and winemakers, and Mackay writes clearly and invitingly, infusing what could be a lifeless inquiry with pith and zest. This is the sort of thought-provoking book that I will return to again and again.

Terry Theise is one of America’s most interesting wine importers. He specializes in small family estates in Germany, Austria and Champagne, whose work has helped form his conviction that wine can touch the deepest places in the human soul.

He is also a provocative wine writer, both in his annual catalogs, and in his philosophical 2010 book, “Reading Between the Wines,” in which he argued persuasively for wine’s centrality to culture.

Now, in “What Makes a Wine Worth Drinking: In Praise of the Sublime” (Houghton Mifflin Harcourt, $25), he takes his exploration a step further, making a case for the ability of great wine to reveal in intricate detail what it means to be human while helping us to explore our own characters and personalities.

This may sound like both a formidable and a quixotic goal, and in truth, Theise is not entirely successful. His most profound experiences with wine seem to have been so poignantly personal that readers may feel like an audience listening to the most articulate guru in the world without actually feeling the spirit themselves.

Yet Theise has much to offer. He can help all of us untangle our own thinking about what makes a wine expressive, about the importance of paradox and ambiguity, and of the difference between wines that he might describe as modest, demure and tender, and those of volume and power.

Theise believes in the importance of connectedness, wine’s ties to place, people and community. Paradoxically, he also finds his own isolation, loneliness and melancholy to be revealed in greater detail by the most profound wines.

Sometimes he tries too hard. “Now we glean the timorous arrival, dare I say, of pleasure,” he writes, a sentence I could hear only in the most unctuous cartoon voice. He describes a wine of “numinous emptiness,” a phrase I’m still trying to puzzle out.

Face-palming moments aside, I loved this book. Theise’s companionable ruminations provide much to ponder, preferably with a glass of great wine.

Over the last 20 years or so, one of the more interesting resurrections has been the appearance of a genre that has come to be known as “orange wine,” white wine produced as if it were a red. The juice of white grapes, ordinarily whisked away from the pigment-bearing skins, is left to macerate with them instead, producing an amber-tinged wine with a mild tannic rasp.

Indeed, most white wines were probably made in more or less this fashion until the second half of the 20th century. The brilliant, clear fruitiness we associate with white wine today is a relatively recent invention.

The reappearance of these wines is far more than a fashion, as Simon J. Woolf writes in his absorbing new book, “Amber Revolution: How the World Learned to Love Orange Wine” (Interlink Books, $35).

The early centers of production of these wines — the country of Georgia, the northeastern Italian region of Friuli-Venezia Giulia and the neighboring country of Slovenia — all shared a history of being conquered and of being subjected, as Woolf puts it, to “cultural genocide.” The rediscovery and nurturing of these styles (the term orange wine encompasses many different sorts of wine) was nothing less than a struggle to regain heritage and identity.

He rightly gives much credit to Josko Gravner, a questing wine producer in Friuli-Venezia Giulia whose journey backward took him to the Caucasus. By 2000, when Gravner first visited Georgia, traditional winemaking there had nearly disappeared after years of Russian and Soviet domination. There, in the qvevri, or amphorae, used traditionally by Georgian families to make wine, Gravner discovered the tool he needed to express himself most fully.

Woolf is an engaging writer with an excellent story to tell and an array of intriguing characters. He is precise, weighing in on the intersection of orange and natural wines, without being pedantic. The book is full of magnificent photography, and includes an exhaustive survey of producers around the world who now work in these styles.

On any given day, consumers must choose from a selection of wines, grapes and styles that seems to have multiplied exponentially over the last 20 years. Forward-thinking wine authorities embrace this diversity as a kaleidoscope of cultural expression, but some, like the powerful (but now largely retired) wine critic Robert M. Parker Jr., pushed back.

Parker railed against those who would advocate these wines, accusing them of promoting “godforsaken grapes that in hundreds and hundreds of years of viticulture, wine consumption, etc., have never gotten traction because they are rarely of interest …”

It’s clear where the drinks writer and occasional New York Times contributor Jason Wilson stands. In his book “Godforsaken Grapes: A Slightly Tipsy Journey Through the World of Strange, Obscure, and Underappreciated Wine” (Abrams Press, $26), Wilson leads us on a genial excursion to some of the world’s more esoteric wine neighborhoods, while examining his own indirect journey toward wine writing and these underdog varieties.

We are introduced to many delicious orange wines, natural wines and esoteric (though culturally resonant) grapes, along with the people who produce and protect them. And we begin to understand the tension faced by growers and producers, who daily must negotiate the conflict between tradition and commerce.

Of the many sparkling wines made in the Veneto and Emilia-Romagna regions of Italy, for example, why was it that Prosecco and sweetened-up Lambrusco broke through? Why not, say, Gutturnio, a wondrously earthy sparkling red that provided one of Wilson’s formative obscure-wine experiences?

Does the commercial power of one dictate the disappearance of the other? Who is served by the vanishing of grapes and styles that, as Parker put it, “have never gotten traction?”

“I’ll admit, I’ve always been kind of insufferable,” Wilson writes midway through the book. Not at all. If anything, he lacks any trace of self-righteousness, a chronic affliction of wine writers. Instead, he will make you curious and thirsty.

The Faults in Our Wines

The last thing many people want to think about are flaws and faults. Yet there they are: cork taint, oxidation, volatile acidity and other problems that can cause the most highly anticipated bottles to be poured down the drain.

In “Flawless: Understanding Faults in Wine” (University of California Press, $25), Jamie Goode, a scientist and wine writer, surveys the myriad flaws that can bedevil even the finest wines.

Not all faults are created equal, Goode asserts. How they affect the wine depends very much on context. Some wines might benefit from a touch of brettanomyces, a particular sort of rogue yeast, while others decidedly will not. Low levels of volatile acidity can lift a wine, but too much can be a very bad thing.

The perception of flaws can be subjective, he says, as not everybody has the same sensitivity to certain faults.

Goode is succinct and clear about how these various flaws are expressed in wines. This can be helpful to any wine lover who knows when a wine is not right, but doesn’t know exactly what is wrong.

When Goode digs in deeper about causes, however, I sometimes got lost in the detailed discussion of chemistry. I learned about faults that I did not know existed, like eucalyptus taint, which apparently is not uncommon in Australia. How can it be prevented? By not planting vineyards near eucalyptus groves, and vice versa.

I would have liked to have seen an exploration of whether it should be considered a fault when modern wines are sound but deadly dull. But in its focus on technical faults, this book will be highly useful to anybody who wants to understand the numerous obstacles that can intrude on pleasure.