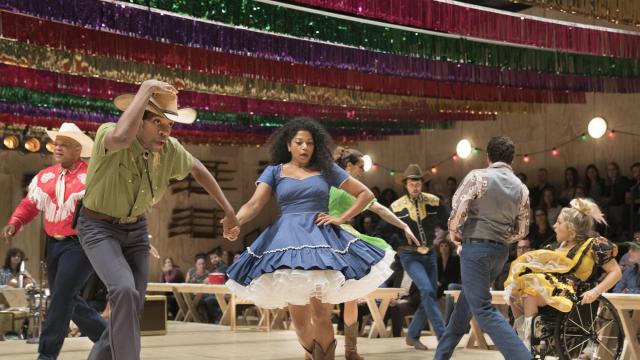 GREAT THINGS IN ALL SHAPES AND SIZES

This was the year in which theater dared to be outrageously big. And equally, outrageously small. In either case, size mattered in 2018, as shows with the breadth and breathlessness of Victorian novels or the miniaturist precision of New Yorker short stories played with and subverted conventional expectations of scale.

Theatergoers could experience both the audacious expansiveness of Jez Butterworth’s “The Ferryman” on Broadway — a play of more than three hours, with 21 vividly individualized speaking parts — and the microscopic intensity of Richard Nelson’s artfully shrunken (105 minutes, seven characters) production of “Uncle Vanya” at a 192-seat college theater.

At the same time, the classic big-canvas American musicals “Oklahoma!” and “Carmen Jones” were reincarnated off-Broadway in deceptively modest interpretations that did away with orchestras and chorus lines to zoom in on the conflicted human hearts within. And new works by three young women playwrights used tiny stages to blow conventional forms of entertainment into smithereens.

Though I have cheated by doubling up within the following list, arranged in alphabetical order, I haven’t begun to accommodate all the riches of what proved to be a surprising year of great things in packages of all dimensions. ‘Angels in America’ and ‘Harry Potter and the Cursed Child’

Both these British born-productions, directed by Marianne Elliott and John Tiffany, respectively, traveled through — and bent — time and space to remind us that there are more things in heaven and earth than are dreamed of in our mortal philosophy. Visually dazzling, impeccably acted and, in their very different ways, reflective of the social upheaval and divisiveness of an anxious 21st century.

Directors John Doyle (the Classic Stage Company production of the Bizet-scored “Carmen Jones”) and Daniel Fish (Rodgers and Hammerstein’s “Oklahoma!” at St. Ann’s Warehouse in Brooklyn) stripped two musicals from the 1940s, both with a book and lyrics by Oscar Hammerstein II, down to their skivvies. In doing so, they shook off the vestiges of costume operettas to discover an abidingly — and in the case of “Oklahoma!” disturbingly — radical energy at their core.

Clare Barron’s exciting, nuanced group portrait of a competitive middle-school dance troupe excavated the raw terror and exhilaration of being 13, with a splendidly confused throng of adolescents embodied without cuteness or condescension by a cast of adults, directed by Lee Sunday Evans at Playwrights Horizons.

What at first appears to be a cozy African-American domestic sitcom, in the style of “The Cosby Show,” is dismantled and ultimately detonated in Jackie Sibblies Drury’s magnificent comedy of discomfort. The Soho Rep production, directed by Sarah Benson, used every theatrical trick at its disposal to keep its audience off-balance and reeling.

British playwright Jez Butterworth returned to the epic heights and depths of his earlier “Jerusalem” with this sprawling tale of a Northern Irish family at the height of the Troubles. Directed by Sam Mendes, this show uses the vast scope and the small, character-defining detail of great family sagas in fiction, rendered in an iron-grip narrative that never slackens.

The bloody drama of vengeance — common to spaghetti westerns and Jacobean theater — is translated into a sharp-witted, ever-mutating adventure story of two African-American sisters on a mission to kill their father. With this unclassifiable play, Aleshea Harris, directed by Taibi Magar at Soho Rep, established herself as an original and resonant voice, a scary surrealist with both feet planted in the all-too-real landscape of 21st-century American culture.

‘Lobby Hero’ and ‘The Waverly Gallery’

Two vintage Kenneth Lonergan plays that finally made it to Broadway, many years after their first performances. As directed by Trip Cullman (“Hero”) and Lila Neugebauer (“Waverly”), these productions did full justice to their author’s grasp of moral complexity and the inadequate, lonely languages with which we try to communicate. And “The Waverly Gallery” gave New York the priceless gift of the incomparable Elaine May’s return to the stage, as a dementia-addled woman holding on fiercely to a shrinking life.

The most affecting version I have ever seen of this epochal comedy of discontent, Richard Nelson’s soft-spoken, self-effacing interpretation — with a devastating Jay O. Sanders in the title role — demanded that we lean in and really listen to Chekhov’s forlorn characters. The effect was of hanging out in a family kitchen, and being treated to illuminating confidences that felt almost too intimate to hear.

Federico Garcia Lorca’s poetic tragedy from 1934 about a childless woman in rural Spain was transported into the London of the 21st century by playwright and director Simon Stone. With a blistering Billie Piper in the title role, this production (seen in a limited run at the Park Avenue Armory) told its harrowing tale in a glass-sided box of a stage. But no walls could confine the all-consuming heat of Piper’s portrait of a woman skinned and flayed by an increasingly demented obsession.

There was a lot to like in 2018, but the productions that stand out as I look back are those that opened unexpected doors on the world outside the theater. That can happen anywhere, of course — even, occasionally, on Broadway — but it happened most for me in noncommercial settings off-Broadway or out of town. Here, in order of opening, are the seven plays and three musicals that flung those doors widest and shoved me through hardest.

The avant-garde has a way of becoming old hat every quarter-century or so, as history sifts the culture to see what’s worth keeping. But Edward Albee’s comedy about decrepitude (or tragedy about survival) has grown only more powerful since its premiere off-Broadway in 1994, as this spring’s brilliantly polished Broadway production by Joe Mantello proved. Starring Glenda Jackson in her return to the New York stage after 30 years, the play in fact seemed ageless: fierce and unforgiving.

At the end of George Bernard Shaw’s “Pygmalion,” Henry Higgins and Eliza Doolittle renounce romance and go their separate ways. When Lerner and Loewe turned “Pygmalion” into a musical in 1956, that was hardly a viable choice. Now, it seems like the only choice, and in making it Bartlett Sher not only restored the feminism inherent in the material but also made the Lincoln Center Theater revival the best Broadway musical production of the year.

Drama is not just what happens under the lights; it’s what happens in your head as you watch it. Jackie Sibblies Drury’s daring, despairing new play at the indispensable Soho Rep counted on that duality as it led its audience through formal manipulations of genre — from a sitcom about a black family to a satire on racism to something truly shocking. In the end it posed a question that strikes at the deepest assumptions of theatrical culture: Is this play meant for you?

In the last year I’ve seen six new plays about young black men being murdered in America. Though all were powerful, they faced a common difficulty: How to theatricalize in one gesture both individual devastation and collective disaster. Antoinette Nwandu’s solution in this searing drama is to weld the story of two black youths in a city like Chicago to spiritual antecedents including enslaved African-Americans, biblical Israelites and Beckett’s hobos Vladimir and Estragon. In Danya Taymor’s production for LCT3, the combined weight of the past and the present was overwhelming.

Two productions I saw outside of New York found established playwrights returning to — and bettering — their top form. Adam Rapp, already a Pulitzer Prize finalist for “Red Light Winter,” debuted a new work about a Yale writing professor who discovers in her star student a genius, a mystery and a moral conundrum. All three elements were brought out brilliantly in David Cromer’s spooky production for the Williamstown Theater Festival, starring Mary-Louise Parker (never better) as the teacher who learns how little it’s possible to know.

The woes of a provincial family amid portents of sweeping political change are a familiar subject to fans of Richard Nelson’s Apple and Gabriel family plays. Yet the intimate, American style of those productions turns out to suit Chekhov’s great drama of Russian disappointment just as admirably. Directed for the Hunter Theater Project by Nelson, this was a revival that felt like a premiere. It also featured a Vanya who, in the brutally unaffected performance of Jay O. Sanders, seemed, like all of us, to be making it up as he went along.

The wicked satirist Bruce Norris (“Clybourne Park” and “Domesticated”) has sometimes aimed at easy targets. But his latest play, like Adam Rapp’s, finds him in “Crime and Punishment” mode, anchoring his weaponized wit in profound questions. The penetrating production by Pam MacKinnon for the Steppenwolf Theater Company in Chicago laid bare the hypocrisy of a culture that believes in rehabilitation and redemption until — in the case of four pedophiles living in a post-prison halfway house — it absolutely doesn’t.

‘What the Constitution Means to Me’

You don’t expect a work that has been in development for 10 years to be electrifyingly topical, but Heidi Schreck’s debate of a play about our foundational legal document could hardly have proved more hot-button. And not just because it arrived at the New York Theater Workshop, in a production by Oliver Butler, amid the national outcry over the Supreme Court nomination of Brett Kavanaugh. No, this was one of those subversive and eye-opening new experiences that is likely to remain provocative for years, at least until the Constitution gets amended — or we do.

If 2018 was a terrible year for new and revived musicals, a few that were somehow both still excelled. Chief among them was Daniel Fish’s chiaroscuro reimagining of the 1943 Rodgers and Hammerstein tale of cowboys and farmers, freedom and restraint, independence and union. As performed by a vivid, twangy cast at St. Ann’s Warehouse, this artifact of the first Golden Age of musicals emerged as a signpost for a much-needed new one. (Notable in the same category were John Doyle’s stripped-down “Carmen Jones” for Classic Stage Company and the mamaloshen version of “Fiddler on the Roof” directed by Joel Grey for National Yiddish Theater Folksbiene.)

‘Rags Parkland Sings the Songs of the Future’

Taking up the challenge of the classic works of musical theater, this sci-fi folk-blues musical by Andrew R. Butler aimed to update the formal expressiveness of songs as narrative. Set in an underground club 250 years from now, it slipped a political tale about environmental disaster, totalitarianism and dispossession into a concert setting, letting the clichés of pop lyrics (lost love, ticking hearts) do double duty as clues to the realities of a dystopian future. At the same time, in a gorgeously shabby Ars Nova production directed by Jordan Fein, it reassured us that as long as humans (or androids) can gather to hear music, music will have something to say.