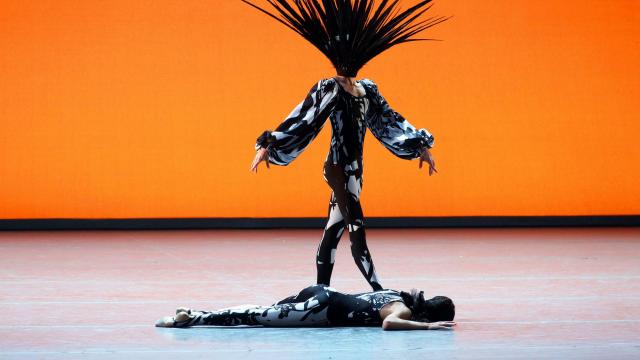 At its world premiere at Bard SummerScape in July, Pam Tanowitz’s “Four Quartets” proved the most sublime new work of dance theater this year. Since it’s concerned with the sublime — it incorporates T.S. Eliot’s celebrated poems — that’s only fitting. Remarkably, Tanowitz doesn’t illustrate the poems: She lets their words, spoken with a wide range of expression by Kathleen Chalfant, sound like emanations from the complex stage world created here.

Another choreographer who reached a new peak this year was tap artist Caleb Teicher. He, pianist-composer Conrad Tao and six dancers gave a preview performance of “More Forever” as part of the Guggenheim Museum’s Works & Process series in October. (The finished product will be performed at the museum Jan. 6 and 7.) “More Forever” constantly extended the sonic aspects of dance. The use of release and silence at the end of phrases was astounding; the interplay between quiet and loud, between percussive and stroked footwork, and the immense range of dynamics and meters within a phrase.

New York City Ballet’s Sept. 27 gala earned not one entry in the annals but two. The solos danced by Taylor Stanley in Kyle Abraham’s “The Runaway” exemplified many American diversities, not least stylistic ones. And earlier in the evening, Teresa Reichlen’s moving “We, the dancers” speech, on behalf of City Ballet’s performers — who flanked her onstage — established fresh moral criteria for the company: “We will not put art before common decency or allow talent to sway our moral compass.” Amid a troubled year offstage for City Ballet, her words have only grown in significance.

Choreographer Richard Alston has been Britain’s foremost dance maker for decades. New York Theater Ballet danced the world premiere of his “The Seasons” (to John Cage’s 1947 score) in April at Florence Gould Hall: a marvelous study of changing weather in pure dance terms. And no dancing all year changed my breathing more powerfully than his company’s performance in February of an older work, “Gypsy Mixture.” The announcement that the Alston company is to disband in 2020 is dark news for dance.

Pride Week in June brought the imaginative and intense prose of Ishmael Houston-Jones’ “THEM” (1986) at Performance Space New York. Performed with stunning power in terms of structured improvisations, this was a movingly mysterious AIDS drama. The interconnections it shows between physical attraction, sexual violence, physical affliction and death are both striking and strange.

New York never seems to have a year without revelatory examples of Indian dance. This year’s Drive East festival began with a recital in the Odissi genre by Arushi Mudgal. Her long final solo, “Murta-Amurta” (“Form-Formlessness”), covered a thrilling range of religious thought and movement texture.

‘Judson Dance Theater: The Work Is Never Done’ in performance

The Museum of Modern Art’s “Judson Dance Theater: The Work Is Never Done” (to Feb. 3) revisits New York’s radical dance experimentalism in the 1960s. Since September, its live performances have done much to deepen my admiration for the work of all the artists concerned (notably, Yvonne Rainer, Deborah Hay and Lucinda Childs). I’ve always been drawn to David Gordon’s Pirandellian examinations of life and art, reality and illusion, originality and pastiche; I love the philosophical intricacy that underlies them. But his new production of “The Matter” (1971) surprised me with its excitingly angry and skeptical tone.

At the Metropolitan Opera, the combinations of geometric groupings and ensemble gestures (choreographed by Carolyn Choa) in the revival of François Girard’s 2013 production of Wagner’s “Parsifal” stay luminous in memory. It was one of several productions that taught me how opera itself can become choreography.

The new partnership of Tiler Peck (senior principal) and Roman Mejia (young corps dancer) was the brightest and freshest of several ingredients newly illuminating City Ballet’s repertory. Peck and Mejia danced George Balanchine’s “Tschaikovsky Pas de Deux” (at Vail in August) and his “Allegro Brillante” (at Lincoln Center in September). Masterly but gleeful technicians, fleet in dynamics and changes of direction, these two — with the same dark-glinting eyes — are kindred spirits.

Justin Peck, a big name in American ballet, keeps experimenting. Among his recent forays into presenting ballet in sneakers — each in a quite different rhythmic idiom — I’m especially haunted by the duets in “Hurry Up, We’re Dreaming,” which had its world premiere at San Francisco Ballet in April. The signs are that Peck means to shake up the norms of ballet, its partnering, gender, footwork. Surely good news for us all.

THE KINETIC WISDOM OF OLDER DANCERS

The dancers shown in old black-and-white photographs of works from the 1960s and ‘70s reveal an unflinching seriousness and a sleek sense of purpose. What happens when those works come to life — not just through the bodies of the current generation of dancers but also through those from the original era? This fall, the Museum of Modern Art’s exhibition “Judson Dance Theater: The Work Is Never Done” and Twyla Tharp’s “Minimalism and Me” at the Joyce Theater afforded chances to celebrate the kinetic wisdom of older dancers.

The Judson collective, among other things, eschewed affectation and mannerism in performance, and for that reason Pat Catterson was an especially riveting sight. At 72, after 50 years of dancing, she performed for the final time in a program of works by Yvonne Rainer at MoMA. Her grounded presence and lack of artificiality allowed the movement to happen in such a direct, matter-of-fact way that it took on a sense of the ethereal.

The same was true of Lucinda Childs in “Particular Reel” (1973), a solo in which she took deliberate steps to create distinct pathways across the white stage of MoMA’s atrium. At 78, Childs, serene as ever, has astonishing control. In stark opposition was Tharp — at 77, she’s wilder than ever — who performed a madcap number that followed the revival of her exceptional “Eight Jelly Rolls” (1971) at the Joyce. She even let herself be flipped upside-down and later, in a solo turn, zigzagged across the stage like a manic butterfly with feet for wings.

Throughout her career, Valda Setterfield, the 84-year-old dancer and muse to David Gordon, her husband, has rarely been less than mesmerizing. In “The Matter @ MoMA/2018,” she surpassed herself. Just as Gordon’s production, both refined and freewheeling, showed what a living archive could be — the accompanying Judson show is anything but — Setterfield proved that aging in dance isn’t about showing how a body can look good doing less. It’s that an older body is a living archive, too. It holds everything.

In all performing arts, but in dance especially, present performances of past works often fail to measure up to contemporaneous accounts, the memories of those who there or the longing of those who missed out. That’s the risk of retrospectives, and this year was heavy with them.

For me, the best resurrection was the least likely one: Sara Mearns dancing Isadora Duncan solos in “Dances of Isadora.” In Duncan’s day, the first decades of the 20th century, she was revolutionary — more even than George Balanchine or Judson Dance Theater or Twyla Tharp (each the subject of retrospectives this fall). Or so the histories say. No films exist of Duncan dancing for longer than a few seconds, and her works in performance tend to look quaint, faded, antique.

Not when Mearns danced them. It could have been a cheap irony or even a betrayal of Duncan, who considered ballet her enemy, to cast a famed ballerina like Mearns in her work. But Lori Belilove, who has devoted her life to preserving Duncan’s legacy, did right in inviting Mearns to try.

For once, the dancing had enough definition and scale that its simplicity felt like eloquence rather than limitation. You could see the economy of the small gestures and the freedom of the large motions, so everything was persuasive as an instinctual response to the music. More than a century old, what Duncan called her “Dance of the Future” was breathing.

I saw Mearns dance the Duncan solos in March on a Paul Taylor American Modern Dance program that also included Trisha Brown’s “Set and Reset” and Taylor’s “Esplanade.” It was the most revelatory selection yet in a project that has sometimes stumbled in its effort to connect past and present. When Taylor died in August, it was good to remember that dances can outlast their creators, and even be brought back to life.

At New York City Ballet, applause usually comes when a work is over. But at the premiere of Kyle Abraham’s “The Runaway” in September, ecstatic cheers erupted midperformance for this electrifying addition to the company’s repertory.

It wasn’t the only unexpected sound in the David H. Koch Theater that night. Abraham, who had never before made a ballet — he founded and directs the contemporary dance company AIM — spent months deliberating over his musical choices. He settled on a multifaceted medley that included Nico Muhly, James Blake and, most memorably, Jay-Z and Kanye West, whose collaborative “Gotta Have It” backed a spellbinding, shape-shifting solo for principal dancer Taylor Stanley.

One of that track’s first lines — “Hello, hello, hello, hello white America” — could have been a call, in this context, to the predominantly white world of classical ballet and its audience, or to City Ballet itself. Before “The Runaway,” the company had not commissioned a work by a black choreographer in more than a decade. Abraham was aware of the expectations riding on him, and determined to transcend them. (On social media, he also addressed the complexity of using music by West, who delivered a pro-Trump rant on “Saturday Night Live” two days after the work’s premiere.)

As City Ballet drew less welcome attention this year for sexual harassment scandals, “The Runaway” generated excitement rare for any ballet — rightfully so. Decked out in Giles Deacon’s spiky collars and headdresses, the eight dancers rose to the challenge of Abraham’s uncommonly eclectic movement, as notes of hip-hop and social dance met his first choreography for point shoes. He packed a lot in, maybe too much. But the busyness also felt like a knowing, celebratory assertion: “Here I am.”

And for now, he’s not going anywhere. “The Runaway” returns in January.