The African Toll of the Great War, in Song and Shadows 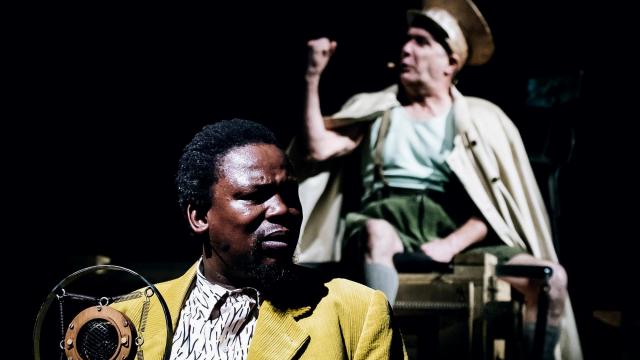 NEW YORK — Though only some of this year’s centenary commemorations have acknowledged it, the European armies fighting in the trenches comprised more than Europeans alone. World War I was also fought by African, Asian, Caribbean and Polynesian troops, who came to the Western Front by choice or conscription. Even less acknowledged is the death toll of soldiers, laborers and civilians on the African continent, whose fatalities probably exceeded 1 million, according to the International Encyclopedia of the First World War. From Namibia to Morocco, Cameroon to Tanzania, Africans served, fought and succumbed to violence or disease — and when it was over, the powers signing the peace treaty in Versailles gave them nothing at all.

South African artist William Kentridge has turned to this shamefully unacknowledged theater of the Great War in “The Head and the Load,” a fiercely beautiful historical pageant of music, movement and shadow play that reanimates these lost African combatants, who principally served as porters under British, French, Belgian and German command. It had its premiere this summer at Tate Modern in London, where it formed part of the British commemorations of World War I, and has come to New York for a two-week run at the Park Avenue Armory.

“The Head and the Load” — its title plays on the Ghanaian proverb: “The head and the load are the troubles of the neck” — follows a number of acclaimed operas Kentridge has directed. Its hand-drawn video projections and low-tech props will be familiar to audiences who saw his high-speed “Nose” or his immense “Lulu” at the Metropolitan Opera. Yet this musical work is a more pressing, even ferocious production, with immediate relevance to today’s debates on the endurance of colonial legacies in our views of recent history.

For “The Head and the Load,” Kentridge has rotated the usual orientation of bleachers in the Armory’s cavernous Drill Hall. You sit facing south, looking at a long, narrow runway for a troupe of nearly three dozen singers, dancers and musicians — led by excellent South African actors Mncedisi Shabangu and Hamilton Dlamini, who take on multiple roles in multiple languages. (Respect, too, to the Armory’s legal team, who procured so many South African performers’ visas when the Trump administration has made clearance tougher than ever.) The performers usually appear in flat, linear formations, and cast shadows upon Kentridge’s projections of soldiers, birds, and war-scarred landscapes from Flanders to Kenya, executed on dictionary pages or on the ledgers of colonial companies. A clattering score by composers Philip Miller and Thuthuka Sibisi (the latter serving as conductor) interweaves modernist motifs with Christian spirituals and with southern and western African modes, while a dancer in a gas mask (Sipho Seroto) keeps watch throughout.

The large majority of Africans who died on the continent in World War I were porters, or “carriers,” forced to move cannons, machine guns, officers’ gramophones and even ships across thousands of inhospitable miles, removing thousands of trees through the dense jungle. Shabangu recounts the harrowing transport of British boats dragged overland from Cape Town all the way to Lake Tanganyika — contested by Britain, Belgium and Germany — by men who rarely survived the full trip. Dlamini, taking the role of a European officer, justifies his barbarity this way: “They are not men because they have no name. They are not soldiers because they have no number. You don’t call them, you count them.”

“The Head and the Load” evokes these porters’ crushing, fatal labor in a long grief-stricken procession, backed by a plangent elegy from marvelous Guinean singer and kora player N’Faly Kouyaté. The troupe marches one by one in front of Kentridge’s mucky charcoal animations, carrying cutout placards of flags, boats, gramophones and planes, as well as portrait busts of African intellectuals and an effigy of Raoul Hausmann’s “Mechanical Head,” a Dada artifact of 1919. Their real shadows intermingle with projected ones, creating an infinite funerary march of porters and matériel. Later we see malnourished men marching through the savanna, struggling to stand at attention, while Kentridge’s layered drawings unspool behind them. Intellectuals deplore the colonial burden; bloodthirsty Europeans rant that African life is cheap. One African soldier recounts his insomnia after killing a white man for the first time, though he shot down other blacks without regard. All of it is performed in a cascading blend of English, French, and German with Zulu, Xhosa, Swazi, and Swahili, not to mention high-speed nonsense verse.

The to and fro of languages marks this production’s clear debt to Dada — and one of the prime virtues of “The Head and the Load” is its insistence on Africa’s place in both the European war and in European modern art. The actors recite the gibberish of Kurt Schwitters’ “Ursonate,” a monument of Dadaist writing, while Kentridge projects chopped-up maps and slapdash demarcations of the continent — as if the Cabaret Voltaire were a second Berlin Conference. The chorus imitates the whirring of air raid sirens and the rat-a-tat of machine guns, as in Hugo Ball’s sound poetry. Dancers wear giant, parabolic earpieces designed for aircraft detection; when you look at the dancers’ shadows, they bear a kinship to the bold geometry of Dogon or Bamileke masks, so key to Dada’s development in Europe.

Kentridge has made frequent use of shadows, projections and processions, most recently in “More Sweetly Play the Dance,” a panoramic video seen at the Marian Goodman Gallery in London in 2015. The visual language of “The Head and the Load” heavily recalls that video work, and several projections of soldiers and battlefields echo those in his recent opera “Wozzeck,” which comes to the Met next year.

Such consistency is no defect when it offers such creative potential and moral force, especially in this indignant production, which looks not only at colonial injustices but contemporary postcolonial inequalities. Increasingly, admirably, Kentridge is using his international profile as a platform for collaborations with a host of South African colleagues, who are billed as this show’s co-creators. They include actors Dlamini and Shabangu; choreographer Gregory Maqoba, who oversees the twitchy movements of the soldiers and porters; and magnificent soprano Ann Masina, who transmutes Satie’s “Je Te Veux” from a love ballad into a cry for independence.

Midway through “The Head and the Load,” Dlamini quotes from great South African writer Solomon Plaatje, who wrote acidly of the African war effort: “Lest their behavior merit recognition, their deeds must not be recorded.”

Yet at the conclusion of this bold exorcism, Kentridge projects a series of ledgers that intervene to fill that unrecorded history. They look bureaucratic at first, but soon you find gnomic phrases like “Freedom — We Missed That Boat Again,” alongside the names of men killed in action or struck down by pneumonia and yellow fever. They are not the Martins and Müllers engraved on thousands of memorials across Europe. These casualties of the Great War, at last recorded, are individuals named Khanyile, Diop, Mbata, Ibrahim.

“The Head and the Load”