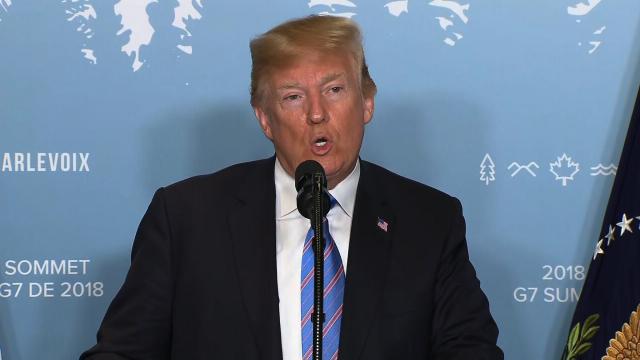 (CNN) — With only hours remaining before a historic summit between the leaders of the United States and North Korea, it's easy to lose sight of what President Donald Trump (and some of his top staffers) said and did just before arriving in Singapore: Blow up an international gathering with some of America's closest allies with a combination of erratic behavior and hugely impolitic statements.

Whatever happens in Singapore over the next day or two, it's uniquely possible -- and maybe even likely -- that what Trump did in Quebec on Friday and Saturday will matter more in the country's long-term geopolitical future, and not in a good way.

Let's detail what happened in the 36-ish hours Trump spent in Quebec -- and what he and his allies said once he left.

Before Trump even jetted to the conference on Friday morning, he floated the possibility of Russia rejoining the G7. (Russia was kicked out of the group after invading Ukraine and annexing Crimea in 2014.)

Trump arrived late for a gathering of G7 leaders focused on gender diversity on Saturday morning. They started the meeting without him.

Trump held a, um, wide-ranging news conference before he left Quebec to jet to Singapore. In that presser, he described the meeting as a "10" out of 10 and insisted he had very close personal relationships with, among others, Canadian Prime Minister Justin Trudeau, French President Emmanuel Macron and German Chancellor Angela Merkel.

After (apparently) watching a Trudeau press conference on Air Force One, Trump took to Twitter to attack the Canadian Prime Minister. "PM Justin Trudeau of Canada acted so meek and mild during our @G7 meetings only to give a news conference after I left saying that, 'US Tariffs were kind of insulting' and he 'will not be pushed around,'" tweeted Trump. "Very dishonest & weak. Our Tariffs are in response to his of 270% on dairy!"

Chief Trump economic adviser Larry Kudlow went on CNN's "State of the Union" and called Trudeau's news conference a "betrayal," adding: "He stabbed us in the back."

Peter Navarro, a trade adviser for Trump, was even more damning in his comments about Trudeau. "There's a special place in hell for any foreign leader that engages in bad faith diplomacy with President Donald J. Trump and then tries to stab him in the back on the way out the door," Navarro said on "Fox News Sunday." "And that's what bad faith Justin Trudeau did with that stunt press conference. That's what weak, dishonest Justin Trudeau did, and that comes right from Air Force One."

REMINDER: This is Canada we're talking about.

And, what did Trudeau say that was so over the top? "I have made it very clear to the President that it is not something we relish doing, but it something that we absolutely will do," Trudeau said of the likelihood of Canada imposing retaliatory tariffs on the US. "Canadians, we're polite, we're reasonable, but we also will not be pushed around."

The horror! Who could have predicted that when Trump imposed steel and aluminum tariffs against Canada -- citing national security concerns -- the Canadians wouldn't be happy and might strike back?

Here's the point: In the space of less than 48 hours, the President of the United States attacked the leader of Canada as "very dishonest & weak" and praised the leader of North Korea for working toward a deal on the Korean peninsula.

Sit with that for a minute.

There's no question that Trump ran on the idea that past presidents had mishandled dealings -- especially regarding trade -- with other countries. So at one level, this shouldn't be surprising.

But, the extent to which -- in a very short period of time -- Trump has clashed with long-time allies (Britain, Canada, France, Germany, Australia and on and on and on) is remarkable. As is his willingness to publicly explode the usually staid and stage-managed international gatherings like the G7.

His allies have -- and will -- cheer his name-calling and his long-distance tendency toward confrontation. But it's worth asking the question of what toll unleashing a full-scale character assassination -- "there's a special place in hell" is pretty strong stuff -- on Canada's head of government means for how the US is perceived in the world.

It's hard to imagine other longtime allies of the US watching the shoddy treatment of Trudeau and wondering "Are we next?" Or, put another way: If Trump is willing to treat Trudeau, who he allegedly really likes, this way, what does that mean for us?

That unsettling, again, will be applauded by Trump allies. They should be put on notice! They have been taking advantage of us forever!

The reality, however, is different. The US has been a steadying force in international affairs for decades. We have been the prime mover in building and maintaining the post-World War II coalitions that have helped avoid a third world war.

If the US no longer plays that role -- or shrinks from it in any meaningful way -- the balance in the world is shaken and changed. And those changes are unpredictable -- and not necessarily beneficial to the United States. Power vacuums and power shifts are filled rapidly in politics and foreign affairs.

That is what Trump's behavior -- both this past weekend and more generally speaking -- creates the possibility for: Major reorientation of allies and partnerships worldwide. And that could well be a much scarier prospect than Trump's defenders would like you to believe.