The 6 most Instagrammable spots around Washington, NC 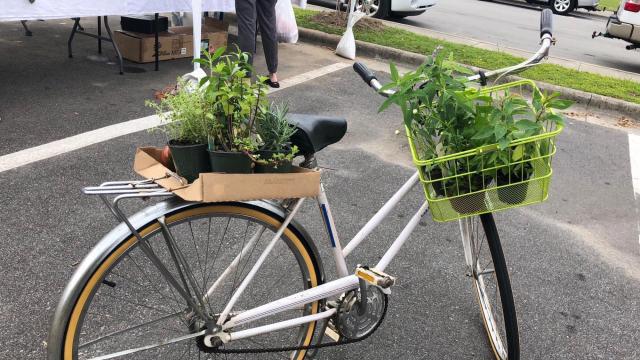 Washington is one of the first places that comes to mind when you imagine memorable photos in beautiful locations. Well, Washington, D.C., that is.

But Washington, N.C., is giving its name-neighbor a run for its money. While you won't find a mall of museums or centuries-old monuments, natural splendor is all around Washington and recent additions to the town have only added to its Instagrammable potential.

"Obviously the jewel here in Washington is our waterfront," said Paula Stephenson, a marketing assistant with the city. "The river here is the Pamlico River. The estuary is the second largest in the United States after the Chesapeake. We have an educational museum called the North Carolina Estuarium."

The waterfront is a real point of pride for the city and one of the most photogenic locations around, thanks to the meticulous maintenance and number of bustling docks. It's common to see boats floating in and out at all times of the year, whether for a lazy day trip along the river or for a bigger adventure into the ocean.

The waterfront is also a well-used dog walking location, and the dockworkers are known to carry treats of all sizes to hand out to four-legged strollers.

Main Street is just a stone's throw away from the waterfront and plays host to a plethora of restaurants and shops.

Historic Bill's Hotdogs has been in operation since 1928 and is a favorite photo spot due to its iconic and nostalgic Coca-Cola sign.

Walking around, you'll also inevitably encounter one of the town's renowned crab statues. These fun sculptures were purchased and decorated by different businesses in the area, so each has a unique design. Make sure to see them all and snap a photo next to your favorite!

Washington is also home to a theater with an interesting past — and a designation as a historic site.

"The Turnage Theatre is a restored, working vaudeville theater," Stephenson said. "It opened around 1913 and has a beautiful, lighted marquee."

Although the theater has been shuttered several times over the years, it's recently been updated with modernized sound and lighting systems, an expansive catering kitchen and several art galleries. For those interested in a tour of the historic facility, be sure to get in touch with the Arts of the Pamlico organization.

More of a foodstagrammer? Then don't miss out on the Hackney Gin Distillery & Restaurant. Operating out of a classic bank building, the restaurant serves up local cuisine with a distinctly British sensibility. Owner Nick Sanders was acutely aware of the picturesque potential of the space when moving in and sought to accentuate the beauty.

"We always knew what we had was a beautiful space," Sanders said. "When you've got 24-foot-high ceilings and the main bank all with balconies, you're always ahead of the game. We always designed it trying to make use of that space so that it was dramatic."

The most requested table in The Hackney is a scenic spot perched atop the balcony and overlooking the restaurant. Officially known as Table 52, it provides a one-of-a-kind view of the entire space.

Washington is situated directly on U.S. Highway 17, providing quick access to other nearby (and Instagrammable) locations. The oldest town in the state, Bath, is only about 15 miles away and is home to the oldest surviving church building in North Carolina.

Just a little further along the Intracoastal Waterway sits the town of Belhaven, a regular stop for many boaters.

Looking for more land-based beauty? Just minutes away from Washington is Goose Creek State Park, which boasts eight miles of trails and a small campground, making it the perfect place to enjoy the North Carolina wetlands.

Once you've trekked around the surrounding area, be sure to get back to town by evening in order to enjoy one of the best views available.

"Washington is blessed because we have these amazing sunsets and sunrises," Sanders said. "Sitting on a pier with a drink in your hand…"

It doesn't get much better than that.