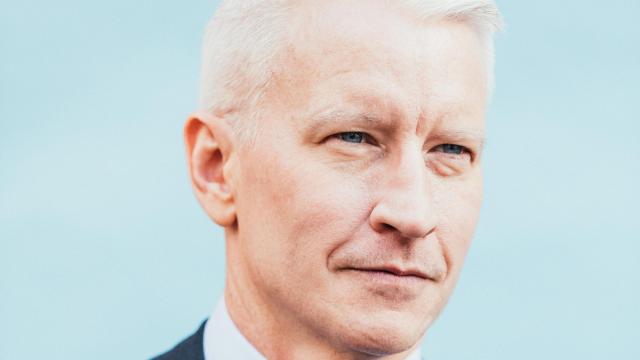 It’s hard to be out with Anderson Cooper and Andy Cohen. Neither blends in. They are hugely recognizable, both appearing on television five nights a week, and when they’re spotted together, people stop in their tracks. Throughout a recent lunch at Cafe Cluny, they were approached by fans of “Watch What Happens Live With Andy Cohen,” his talk show on Bravo; the actress Julianne Moore; and a woman thanking Cooper for a hurricane relief segment on “Anderson Cooper 360,” his CNN show.

“I paid her to do that,” Cooper said. “We’ve produced this entire afternoon.”

In their less famous days, a high school friend of Cooper’s tried to set them up on a blind date. It was 1995, and Cooper had recently moved from Los Angeles back to New York for a job at ABC News, and Cohen was a producer at “CBS This Morning.” The date never happened, but a friendship eventually did.

Their bond has now become a commodity. Their “AC2” tour, in which they talk about whatever they like before a paying audience, continues at the Beacon Theater in New York on Jan. 26-27. And on New Year’s Eve, Cohen will join Cooper to host CNN’s telecast from Times Square — replacing comedian Kathy Griffin, who was fired in May after posing for a photograph while holding a Donald Trump mask bloodied with ketchup.

“I hope she gets back to doing what she does best,” Cooper said. “We wish her the best.”

Over tea with milk for Cohen, 49, and scrambled eggs with toast for Cooper, 50, the pair discussed first impressions, dancing at the Roxy nightclub, lost luggage and Panda Express.

These are edited excerpts from the conversation.

Cooper: We had a phone call to set up the date. I was in my office at ABC News.

Cohen: I remember being home when I made the call, on Horatio Street. I was excited.

Cooper: Within 45 seconds, he said, “Your mom is Gloria Vanderbilt.”

Cohen: So bad. I wanted to date the Vanderbilt boy.

Cooper: I imagined him on a Bluetooth headset, walking around, gesticulating a lot.

Cohen: By the way, you weren’t exactly Mr. Personality on that call, either.

Cooper: No, I wasn’t. I was very depressed. It was a bleak time. I was trying to figure out my way at ABC. I started as a one-man band; a guy I worked with when I was a fact-checker made a fake press pass for me, and I borrowed a camera and started going to wars. I’d been working at Channel One for three years. I’d never worked at a network. I didn’t know what I was doing. We never had the date.

Cohen: We started running into each other at the Roxy. He would be dancing around.

Cooper: I wouldn’t be dancing around. I was like, that’s the guy who said, “Your mom is Gloria Vanderbilt.” Cohen: We both knew Barry Diller, and we wound up in this group that would travel together, him and his friends.

Cohen: We went to Turkey.

Cooper: I remember going up some waterway in a slow-moving boat, talking to you, sort of entranced. Andy, even before he was on TV, was the life of the party.

Cohen: I thought he was a little standoffish. But I liked making him laugh. That was my goal: Maybe I can crack this guy up, and that’s where we can come together.

Cooper: He did this whole “Maniac” dance.

Cohen: Oh, yes, from “Flashdance.” We were on the boat, it’s a very fast dance, and I was barefoot. Didn’t I cut my foot?

Cooper: It made me giggle uncontrollably. That’s the first time I remember being like, “You’re funny.”

Cohen: Then we would have dinner occasionally, or be at the same party. We went to Croatia in 2005. I was at Bravo then.

Cooper: I started working later at night, so our chances for hanging out were limited.

Cohen: Our shows are so different, but we have commonalities because we’re both on every night. I worked in news —— why are you laughing? Excuse me, I worked at CBS News for 10 years.

Cooper: You absolutely did, but the advice you would give me was not —— I was in Croatia with him when I got the call about Hurricane Katrina. I turned to Andy and said, “I gotta go,” and, Andy, as a newsman, what was it you said?

Cohen: I said: “This is ridiculous. They just want you outside at some rainstorm so they can get ratings.”

Cooper: Needless to say, I was on the next flight out. But one of the things I don’t think Andy has gotten enough credit for is he’s been an openly gay man in this industry from the very beginning. I was out at work ——

Cohen: He was out to everybody. Everyone at CNN knew your partner.

Cooper: And I was out at the Roxy.

Cohen: Yeah, with your flaming-white hair, like Katniss Everdeen.

Cooper: It was more about not discussing it publicly. But I told you I was going to be making a statement.

Cohen: He never asked me for advice, but we did talk about it.

Cooper: I don’t think there’s anything I’ve not discussed with him. It’s nice to have someone who pokes fun at you. If I’m in a dangerous place, he’ll text me something funny. Cohen: I do get worried when he’s like, “I’m on my way to Egypt.” I’m like: “Are you kidding me? When are you coming home?” You’re not eating your eggs. Do you not like them?

Cohen: Are you going to eat your toast?

Cohen: Do you want some jelly?

Cohen: He is a very fussy eater. We were in the Dallas airport two weeks ago. Tell what you were eating for breakfast.

Cohen: He was eating orange chicken at 9 a.m. It was so gross.

Cooper: We took a trip to Brazil five years ago. It was me; my partner, Benjamin (Maisani); a friend of ours; and Andy. I brought them to Trancoso, this town I’d always heard about. I booked the hotels, I booked the flights — the one thing I asked Andy to do was check the bags in.

Cohen: I lost Anderson’s luggage. It was terrible.

Cooper: That was the first time I’ve ever gotten angry at Andy. And when I get angry, I get silent.

Cohen: Prickly ice-cold monster. You have to navigate his moods. I know exactly when to stop talking to him. Cooper: We’re both sensitive in reading other people’s emotions. I know instantly when he’s lost interest in a conversation on the phone. We work all the —— see, he’s checking ——

Cohen: I’m rolling my sleeve up.

Cooper: I think he was secretly about to check his watch.

Cohen: No, I wasn’t. Look, you know people when you travel with them. It’s intimate.

Cooper: When his second book came out, he asked me to do an interview with him at the 92nd Street Y. My agent was in the crowd, and she was like, “You guys should take this on the road.”

Cohen: We looked at each other, and, immediately, were like, “Oh, my God, we can travel the country together.”

Cohen: New Year’s will be a good continuation. It’s going to be really fun. Amy Sedaris is coming by. We’re going to play games.

Cooper: We want people to feel like they’re hanging out with us for a night.

Cooper: I would expect nothing less.

Cohen: Just so you know.

Cooper: I’d rather not know the details.