Thanks to locally owned Virtual Claus, COVID isn't canceling every visit with Santa this year 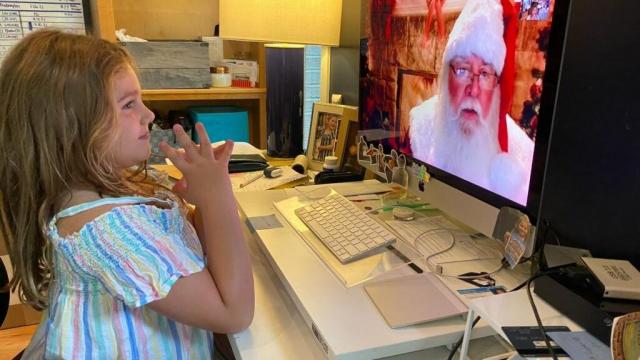 The COVID-19 pandemic has already scuttled some Christmas plans. Raleigh canceled its popular Holiday Express at Pullen Park this year. And the family behind Meadow Lights in Benson, which features train rides through a massive holiday light display, announced it wouldn't open in 2020.

And as we move closer to the holiday season, it's likely other traditions — from visits with Santa to gingerbread house parties — may not happen either.

Enter Virtual Claus, the creation of a Chapel Hill father who anticipated a Christmas season where his own kids wouldn't get to deliver their wish list to the big guy.

Jarred Chappell launched the website this month, providing opportunities for families to meet with Santa virtually. He's doing it with the help of one of the region's popular local Santas — Santa Tony, AKA Tony Chapin, a longtime Santa, father and grandfather from Durham.

The idea came to Chappell just as his kids got out of school for the year.

"I was driving down the road and thought about how hard the pandemic was on kids, and they didn't get to finish the school year and I know some kids didn't have normal graduation," he said. "I was just thinking about how it affects kids and started thinking forward about what else was going to change."

His mind quickly landed on Christmas. Chappell knew Chapin and reached out to him that very night to get his thoughts on what might happen.

"There are still a lot of unknowns, but we didn't think it was going to look the same," Chappell said. "We thought it would be good to give this a shot and put a website together."

Through Virtual Claus, parents can book virtual one-on-one sessions with Santa to chat about their wishes. The video calls, which take place via Zoom, run about eight minutes.

Before the session, parents can share some information about their child, so Santa has details about what they got for Christmas last year, what their Elf of the Shelf's name is and what they might want this year.

After the call, kids receive a personalized email from Santa with a note and a screenshot of their meeting. Visits with Santa cost $25 for one child, $45 for two kids and $65 for three.

Virtual Claus is booking calls now and plans to offer one-on-ones with Santa all year.

Chapin said he's excited to meet up even virtually with kids. Chapin attended the Charles W. Howard Santa Claus School, dubbed the world's oldest and best Santa Claus school in the world, twice in the early 2000s and has been a regular at private Christmas parties across the Triangle ever since.

"I turned white way prematurely for my age," Chapin tells me.

Most of his clients are repeat customers who see him throughout their kids' childhoods. He loves seeing the kids grow up and seeing the excitement in their faces when they spot him.

"It's just to see their faces," Chapin said. "They come up and they are just so in awe of Santa. It's just me. It's Santa Tony, but they have a great time."

As families book more calls with Santa, Chappell said he plans to bring in more Santas to the mix to help Chapin out. Plans also call for offering storytimes with Mrs. Claus too.

Even though Christmas is three months away, Chappell said he's already started getting bookings.

"Overall, the response has been really positive," Chappell said. "I've had a lot of parents reach out and tell us how excited they are about it. What a great idea it is. They didn't know if they were going to be able to have their kids see Santa this year. The first kids ... I think they've really gotten a kick out of it. We've got a bunch of smiling kids, really excited. And we've had parents come back and say how their kid wants to talk and call Santa again."

Check out Virtual Claus on its website. Chappell is offering a discount. Get 10% of any booking made before 10/31 with code EARLYBIRD at checkout.

And, as I wrote back in April, another local Santa also is offering virtual Christmas greetings through recorded messages to kids.