From the General Manager

How about: a thank you? That's EXACTLY what happened Thursday night (Oct. 7) at the RDU International Airport.

Around 2,000 people came out to say "Thank You" to World War II veterans. Those veterans had just spent the day in Washington DC touring the World War II monuments. It was a long, exhausting, exhilarating day. The North Carolina Automobile Dealers Association was the driving force behind this effort. WRAL-TV and Capitol Broadcasting Company are honored to tell the stories of the veterans and to publicize the efforts of the NCADA. 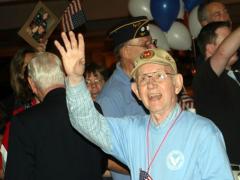 I was pleased to be part of the flag-waving throng at the airport. There were people of all ages waiting to greet the veterans. There were 3-year-olds to at least 93-year-olds. Most of all there was pride. Pride in what this "Greatest Generation" did in serving our country. Pride in the ability to congregate in one place and share their gratitude. Sunny Johnson, who is one of the Flight Directors for the Triangle Flight of Honor, has said "It's never too late to say thank you."

And while we're on the topic of thank yous, I'd like to thank the generosity of our viewers who in ONE day (over a TWO-hour period of time), called WRAL-TV to donate tens of thousands of dollars so that these vets could get their rightful thanks.

While there are fewer and fewer people around from this "Greatest Generation," perhaps the outpouring of gratitude that was shown by these younger folks gives us hope for future generations.

And one of the lessons learned from this great event: It's never too late to say thank you.