Johnston County, N.C. — A quick-thinking Johnston County emergency dispatcher is credited with saving the day after he helped police locate a woman who was trapped inside the trunk of a car.

On Jan. 14, 911 supervisor Tim Medlin received a call from a woman who said she was locked in the trunk of a moving car by her jealous boyfriend. Medlin said it was hard to understand her.

"The only thing we knew is it was a female that was very upset, and that she was in the trunk of the car," he said.

The call got disconnected. He called back but could not reach the woman.

Medlin then had the idea to text her from a cell phone. She responded. 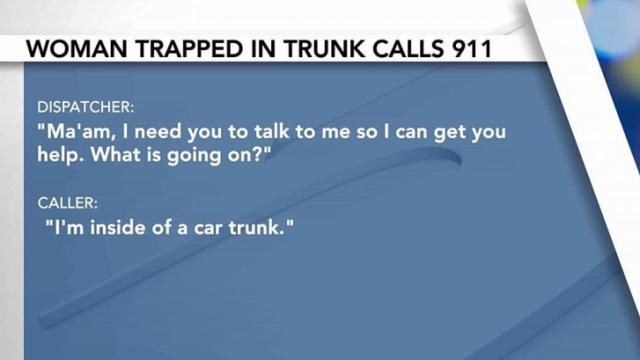 "Texting, it was the only way I knew we would probably not get her in trouble," Medlin said. "When I sent a simple text, 'Can you text?' She responded, 'Yes.' The immediate response after that was, 'Help me.'"

The woman was able to provide Medlin with the make and color of the vehicle and told him she believed she was headed to Fayetteville.

Medlin called the Cumberland County Sheriff's office, who then contacted Verizon Wireless, and was able to locate the phone.

The woman also gave authorities the name of her boyfriend - Nicholas Mattevi.

Once they had a location, Fayetteville police spotted the car, rescued the woman and arrested Mattevi.

"They located her. It was a good feeling to know she was located," Medlin said.

Jason Barbour, Johnston County's 911 director, said all 911 centers can receive text messages, but cannot initiate them, something he says needs to change.

"This is a prime example of technology being used to the fullest at someone's greatest time of need," Barbour said. "We can only receive texts and then text back one another. We can't start the conversation. So that was the problem."

Barbour said he is glad Medlin had a cell phone nearby to text the woman, but believes all 911 centers should be able to be updated so that they can initiate texts from their systems.

Mattevi was charged with false imprisonment. He was released on a $10,000 bond.