On a Spring Morning, a Sound Heard Too Often in Schools: Bang. Bang. Bang. 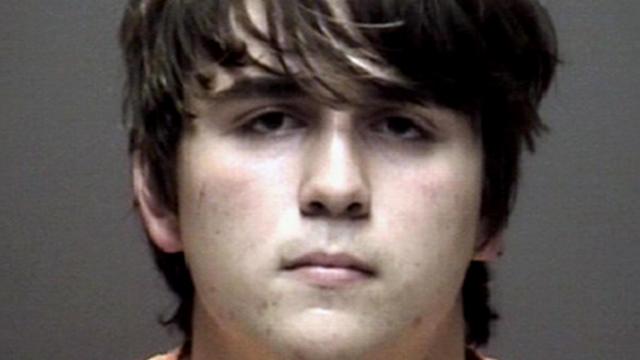 SANTA FE, Texas — Just outside the ceramics storeroom where Trenton Beazley huddled on the floor, his classmates and substitute teacher from first-period art lay dead. A gunman stalked back and forth between two adjoining classrooms inside Santa Fe High School, firing blast after blast.

This was really happening. Again. This time, to them.

Beazley, 15, a catcher on the high school baseball team, had woken up Friday morning excited about that evening’s quarterfinal game against Kingwood Park. When Beazley slipped into art class, the substitute, Ann Perkins, had been telling another student to go get a tardy pass. Everything about that muggy late-spring morning seemed so routine.

Then, at about 7:30 a.m., Beazley heard the sound that has become too routine in schools across America: Bang. Bang. Bang.

On Saturday, through their shock, grief and anger over a massacre that left 10 people dead and 13 wounded, this broken, stunned community of 13,000 struggled to find any reason behind it all. Investigators have not announced any motive but said Dimitrios Pagourtzis, a 17-year-old student at Santa Fe High, had confessed to the rampage and told investigators he had spared students he liked so “he could have his story told.”

Like millions of their peers, the students here grew up in the shadow of school shootings. They had done active-shooter drills since grade school. A school resource officer, who was critically wounded Friday, patrolled their sprawling red brick school an hour southeast of Houston.

Only in February, they had been spooked by a lockdown ordered after someone reported a pop-pop-pop sound outside. Devin Maier, 17, remembers not being able to go back to class that Monday and Tuesday. “I was just scared,” she said.

The school massacre that same month in Parkland, Florida, struck a response here, too, as a small group of students marched and waved signs that declared, “Never Again.”

But for many, the protests and preparations only hardened the shard of dread that occupied their thoughts — that one day, the television scenes of tears and police tape, memorial flowers and hands-up fleeing children, would arrive for them. Their turn.

“In the back of my mind, I knew it was going to happen,” said Madilyn Williams, 18.

Other students would later say they thought they heard a garbage can slamming or metal being hammered, but Beazley said he and his classmates knew almost immediately what was happening.

They bolted for the storeroom where the pottery kilns were kept while Perkins went to shut the classroom door. She was one of the two teachers killed.

The last thing Beazley saw as they tried to slam the door was the gunman, clad in a black trenchcoat, heading toward the closet, a strap of shotgun shells slung across his chest.

“I realized then, wow, he’s not playing around,” Beazley said.

The students tried desperately to barricade the closet door with a heavy pottery kiln. He smashed his fists against a heat vent to dislodge the kiln from the wall, but as he shoved it across the floor, the gunman jabbed his .38 pistol through a broken window of the closet door. Beazley heard a taunt that is now burned onto his memory: “Surprise,” the gunman said, followed by an expletive. Then:

He killed a student who lay near the door, and as Beazley pushed and pushed on the kiln, he aimed at Beazley.

“He saw me,” Beazley said. He was grazed in the side, and then struck again by the bullet’s ricochet. “I just dropped to the floor.”

Rome Shubert was just next door, in the first classroom to be attacked. He had been drawing 3-D shapes in art class when his teacher left to drop off something in another classroom. The gunman walked in through the open door “guns blazing,” Shubert said.

“I hear boom. Three seconds later — boom. A couple seconds later, another bang,” he said. “My ears are ringing and I have no idea what’s going on. His first shots were definitely in our room.”

Shubert, a 16-year-old pitcher on the baseball team, dived under a table, and flipped it onto its side for cover. He said he saw Pagourtzis fire at one male student lying on the floor, but he seemed to miss the student on purpose.

“He shoots a couple feet to his left, and then he shoots near him,” Shubert said.

The shooting looked random to Shubert, but he did say that Pagourtzis’ ex-girlfriend was a student in his art class, and that she was shot and killed in the art room.

“I think she was sitting at the table with her back facing the door and she was the very first one,” he said.

County Judge Mark Henry, the top elected official for Galveston County, said Saturday that he did not know whether Pagourtzis had targeted a former girlfriend.

Shubert eventually ran out of the room and hopped a wall outside behind the school. There, a friend told him what he had not realized until then: He had been shot. He was bleeding from the back of his head. “The doctors told me if it would have been any up, any down, any left or right, that I could be paralyzed for the rest of my life or killed,” he said Friday night, a bandage poking from underneath his curly red hair.

In a nearby agriculture class, Layton Kelly and his friends sprang to action as if they had been training for that awful moment. They heaped desks in front of the door, stacking them as high as they could. They shut off the lights and huddled in the blackness, some praying, some crying, most of them trying fruitlessly to get a cell signal to reach their parents, as shot after shot echoed from just outside the door.

Kelly said he counted at least 15.

Dalton Stevens, 16, another pitcher on the baseball team, stayed huddled in a small storage space inside the dance classroom, where he had been taking a stretching class for athletes. Nine male students and their teacher hunkered down in a tiny closet, surrounded by the Native American-themed, green-and-gold costumes for the school’s Tribal Belles dance team.

“The fire alarm starts to go off because someone pulled the fire alarm,” he said. “We keep on hearing shots. I’m shaking. I’m freaking out. I don’t know what to do. Everyone is frantic. I prayed a couple times.”

The dance teacher in the room with them, Ashley Hardage, told the students to stay calm, to stay quiet.

So he took out his cellphone and texted his mother. At 7:46 a.m., from inside the closet, Stevens wrote: “There’s someone shooting in the school.”

At one point, a man who Stevens believed was the wounded school-resource officer, John Barnes, entered the dance classroom after being shot in a confrontation with the gunman. Stevens desperately wanted to help the officer, but they did not open the closet door.

“I know I couldn’t just go out there, because I know the shooter’s in the art hallway,” he said.

“It sounded like he was dying,” Stevens said. “I hear him in the room and I hear him talking on the radio, and I hear his restricted breathing, in agonizing pain. We hear other police officers come in, thank God. They exchange gunfire in the hallway.”

The gunman engaged the police in a 15-minute firefight that ended when he surrendered, abandoning what he said had been a plan to kill himself, Henry, the Galveston county judge, said. After several minutes of silence, Stevens heard SWAT officers knock on the door and tell them the assailant was in custody, but the students still stayed quiet in the closet and did not open the door. They believed the gunman could have been tricking them into opening the door.

“We didn’t say a word,” he said. “They had knocked on the door and said it was the police, but with our protocol, we’re taught not to say anything, until someone comes and unlocks the door and opens it.”

The students in the closet threaded their way out through hallways covered in blood.

“I’ve never been so scared in my life,” Stevens said.

Grief washed over Santa Fe as parents and friends began to learn the names of the eight students and two teachers whose lives were cut short.

Cynthia Tisdale, a teacher, would not get to live out her wish of retiring to spent more time with her grandchildren. Christopher Stone, 17, would never again delight his friends with his dance moves and charm. Sabika Sheikh, 17, a foreign exchange student, would never get to reunite with her parents in Pakistan. Shana Fisher, who just turned 16, would never come home to her beloved dog, Kallie. And on and on.

The gunman’s family also released a statement on Saturday, saying they were as “as shocked and confused as anyone” and that news-media descriptions of him and his actions seemed “incompatible with the boy we love.” They said they were cooperating with the investigation.