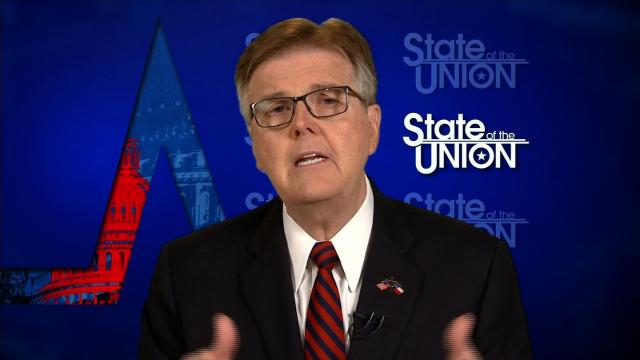 CNN — Texas Lt. Gov. Dan Patrick is ready to work on restricting gun sales in his state between strangers without a background check in the wake of last week's mass shooting in Texas -- even if it means opposing the National Rifle Association.

"That gap of stranger to stranger we have to close, in my view," the stalwart Republican told the Dallas Morning News in an interview published Friday.

Patrick said that since gun sales between strangers are often not subject to checks against federal lists of people banned from buying guns, strengthening background checks is "common sense."

He continued, "When I talk to gun owners, NRA members and voters, people don't understand why we allow strangers to sell guns to total strangers when they have no idea if the person they're selling the gun to could be a felon, could be someone who's getting a gun to go commit a crime or could be a potential mass shooter or someone who has serious mental issues."

"Look, I'm a solid NRA guy," Patrick added, "but not expanding the background check to eliminate the stranger to stranger sale makes no sense to me and ... most folks."

The lieutenant governor, a vocal backer of President Donald Trump, predicted that the President will be reelected in 2020.

But should Democrats regain control of the White House and Congress, "they will pass draconian laws that dramatically impact our Second Amendment rights," he said. "And if Republicans do some common-sense things, that helps us stave off that day."

Patrick wants to keep transfers among family members free of checks. He'd include friends too, though he realizes that could be abused. The lieutenant governor said it's up to state senators whether that loophole should remain open.

The gun lobby slammed Patrick's comments as a stunt that could lead to mass gun registries, with an apparent reference to former New York Mayor Michael Bloomberg's work with then-President Barack Obama on efforts to tighten gun access.

"With due respect, Texas Lt. Gov. Dan Patrick's 'proposals' would resurrect the same broken, Bloomberg-funded failures that were attempted under the Obama administration," the NRA said in a statement. "Like most political gambits, Lt. Gov. Patrick's 'solution' precedes his possession of the facts, including this critical concession by the Obama administration: Criminalizing private firearm transfers would require a massive, governmental gun registration scheme."

"The NRA remains at the forefront of legitimate efforts to combat crime in our country," the group added. "We encourage Lt. Gov. Patrick to join us in support of the same."

The group listed "fixing our broken mental health system, prosecuting known criminals and enforcing the existing gun laws that require follow-up whenever a prohibited person tries to buy a firearm" as some of the solutions to gun violence.