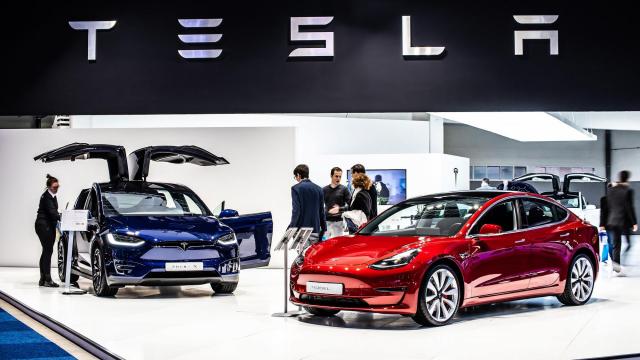 The company's shares fell as much as 20.6% Wednesday, paring back a meteoric rise that had driven the stock up 36% between Friday and Tuesday and pushed it to $968 at one point, a record.

Tesla Vice President Tao Lin said Wednesday on Chinese social media platform Weibo that deliveries expected in early February from the company's Shanghai plant would be delayed. Tesla said last week that the coronavirus outbreak would hold up production in its plant because city authorities had extended the Lunar New Year holiday from January 30 until February 9, forcing the factory to close. The company delivered its first Model 3 cars made in Shanghai to the Chinese public in early January.

Tesla did not immediately return an email seeking additional comment about the delays.

Tesla is still up about 71% this year and 140% over the past 12 months. However, the automaker remained the most-shorted stock in the United States as of Monday and Wall Street analysts continued to show skepticism about the company.

On Wednesday, the stock had only nine buy ratings out of 35 analysts covering the company, according to Refinitiv. The rest were sells or "holds," which has become Wall Street parlance for "sell." Analysts' median price target was $444.44, or about 40% less than Tesla's lowest point Wednesday morning.

Tesla's stock had risen on bullish sentiment from analysts who were looking to the company's Shanghai factory to boost growth. Tesla said it had ramped up production of its China-made Model 3, giving investors hope that Chinese demand for Tesla cars would give the company another growth market.

However, it wasn't the only automaker to deliver good news over the past few days. GM said Wednesday it had made a $6.7 billion profit for 2019 despite a United Auto Workers strike that shuttered 31 of its factories and 21 other facilities. Many bearish Tesla analysts believe GM and other automakers pose an existential threat to the company once they begin to ramp up electric vehicle production.

Even after Wednesday's slide, Tesla's surge has hurt short sellers, who as of February 3 had lost $8 billion so far this year, according to financial analytics firm S3 Partners. Short sellers place bets that a stock will fall, but if the shares go up before they can cash out they have to buy them at a higher price to close their positions.

The effect has been the opposite for CEO Elon Musk, who got closer to cashing in on a massive pay package after the stock rallied. Tesla pays Musk with stock options, which he can access only if the company hits aggressive sales and market value goals.