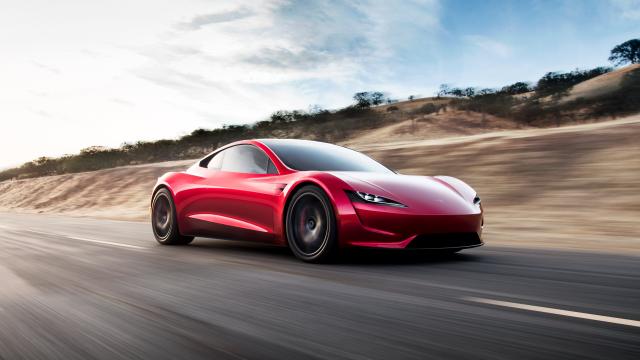 NEW YORK (CNNMoney) — Tesla's new Roadster has some impressive numbers. But with a price on par with a Bentley or Aston Martin, the question is, can it deliver on the kind of luxury and drivability those buyers expect? That's going to take a lot more than just sternum-cracking acceleration.

At these prices, someone could buy an Aston Martin DB9 or a Bentley Continental GT. Those cars can't match the Roadster's advertised performance figures -- but there's a lot more to a sports car than just speed.

The Roadster's ability to go from zero to 60 in under two seconds is unprecedented, and would make this the quickest production car ever. It can run the quarter mile in 8.8 seconds. That's faster than a Dodge Challenger Demon, an 840-horsepower single-seat car designed especially for drag racing.

And its top speed of over 250 miles an hour puts it in the same league as the $3 million Bugatti Chiron. That figure is especially surprising, given that top speed is not an area in which electric cars tend to excel. (High speeds mean much more battery-draining wind resistance.)

Anyone who can afford to spend a quarter million dollars on a car is used to high level of quality of craftsmanship. That means Tesla needs to overcome the production issues it is currently having with the far simpler Model 3, as well as the sort of quality issues it's been having with the complex Model X.

Sports cars also need to corner well and give the driver a sense of confidence and control. Tesla's original Roadster, produced from 2008 to 2012, was built on the skeleton of a British Lotus sports car. Lotus is legendary for how well its cars handled, and for an obsession with light weight, which also helps with cornering and control. For a company building a high-end sports car, there could hardly be a better place to start. This Roadster will presumably be all Tesla.

Electric drive does provide some advantages for a sports car. First, most sports cars have an engine that concentrates weight somewhere in the car. A lot of sports car design is about how to carry that big block of metal through turns at high speeds. Engineers and designers work hard to position the engine as low as possible in the car, and in a place that will give the car stable, controllable and predictable cornering characteristics.

In an electric car, the weight is concentrated in battery packs, but those batteries don't need to be all together. In Tesla's other vehicles, they're spread out under the floor of the car, giving them a very low center of gravity and weight that's evenly balanced.

But, batteries are heavy and weight is still a problem, no matter where it is. That's why electric cars are, generally speaking, heavier than gasoline powered cars. Tesla engineers will still have to overcome, or minimize, the sheer weight that will come with that level of range and performance.

Still, based on Tesla's claims, the Roadster certainly the potential to be a big winner for Tesla that could help generate the profits it so badly needs and even more buzz.